The former Saxon + Parole space is for lease on the Bowery 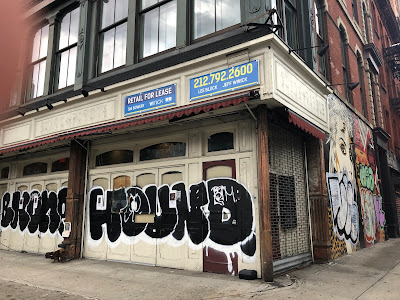 The for rent sign arrived yesterday at 316 Bowery ... officially bringing an end to Saxon + Parole's tenure here at Bleecker.
As noted a few weeks back, the Equestrian-themed restaurant was one of many in the neighborhood that had remained dark since since the PAUSE went into effect in March — this despite ample outdoor space for sidewalk dining.
S+P opened here in September 2011, replacing the company's Double Crown restaurant. They've kept busy by opening an S+P outpost in Auckland, New Zealand last month.
As for No. 316, the listing doesn't mention the asking rent for the space (upstairs and downstairs!) that totals 6,600 square feet.... along with the tagged (multiple times) Shepard Fairey Blondie mural.
Posted by Grieve at 5:00 AM

I remember when this space was Manahatta, one of the few places with a dance floor downstairs. Brings nostalgic basement dance parties to mind. Wonder what will be here next.