Sept. 9: The latest headlines on the water crisis at the Jacob Riis Houses Photo by @decolorescommunityyard
Local media continues with solid coverage of the water crisis at the Jacob Riis Houses on Avenue D ... led by Greg B. Smith at The City and Gwynne Hogan at WNYC/Gothamist.
As previously reported, residents were told last Friday night not to drink or cook with tap water after tests revealed traces of arsenic. The City said that NYCHA officials learned about the contamination two weeks earlier and did not notify the nearly 2,600 residents in the complex between Sixth Street and 13th Street. NYCHA officials have denied that claim.
• Arsenic-Free NYCHA water test results came after taps flushed for hours (The City)
• East Village public housing tenants mystified as city claims no arsenic in water — but maybe Legionella (Gothamist)
• Test results come back negative for arsenic at Jacob Riis Houses, but positive for traces of Legionnaires' disease bacteria (CBS New York)

Out here at Riis Houses, w/ @CarlinaRivera & @HarveyforNY, helping w/ hot meal distribution for tenants who are enduring yet another day without useable water.

We need this crisis resolved once and for all. And we need accountability for what residents here have endured. pic.twitter.com/FsgxLs0Tzx

... and here's a flashback to a piece via PIX 11 about the water at Riis Houses from Aug. 12 titled, "Cloudy tap water has East Village NYCHA residents worried."
Previously
Updated 3 p.m.
The Jacob Riis Tenant Association is hosting this meeting tonight at 6 at P.S. 34 on 12th Street and Avenue D... 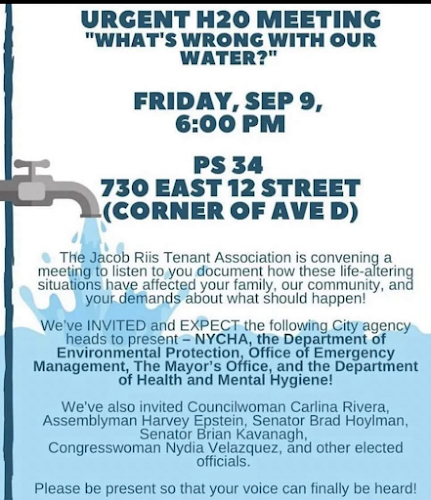 The rest of that neighborhood must be affected also. UNIVERSAL testing of water for all those on LES. This is not limited to Riis. Pipes all over the area are old.

Would that mean that the water fountains at the East River park are potentially contaminated?

Any contamination is likely from the water storage tanks. Water is pumped up to the tanks to allow for a gravity supply of domestic water.