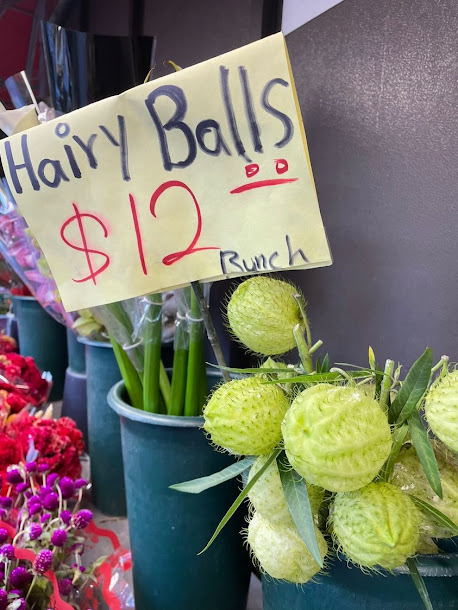 The sign for Hairy Balls for sale ($12 a bunch) outside Key Food is apparently causing a few double takes here on Avenue A. (Thanks to Sarah Keyes for sharing the photo!)
Apparently not the work of a prankster.
As Wikipedia points out:

Gomphocarpus physocarpus, commonly known as hairy balls, balloonplant, balloon cotton-bush, bishop's balls, nailhead, or swan plant, is a species of dogbane. The plant is native to southeast Africa, but it has been widely naturalized. It is often used as an ornamental plant.

And there really isn't enough room on that sign to spell out gomphocarpus physocarpus.
Posted by Grieve at 12:00 PM

Hairy balls for $12 in the East Village?!?! Inflation is out of control!

So how much is that per ball?

Someone should get some as a gift for The Hairy Lemon.

I never have to pay.
-IzF