A busy week for milling in the East Village 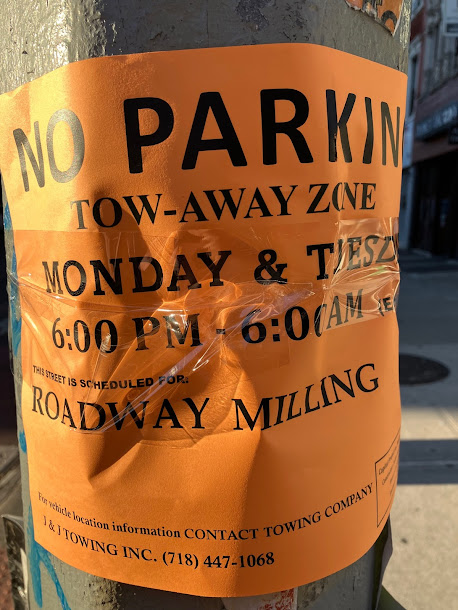 The neighborhood will be experiencing a lot of late-night milling — the removal of the top layer of a street's asphalt surface — in the week ahead.
According to the city schedule here (H/T Peter Feld!):
On Monday (Happy Halloween!) and Tuesday, there's nighttime milling scheduled for Ninth Street between Avenue A and Fourth Avenue.
Then Tuesday and Wednesday nights, the milling happens on Sixth Street from Cooper Square to Avenue A ... and on Fifth Street from Cooper Square to First Avenue.
And Wednesday-Thursday: Fourth Street from Avenue A to Avenue D; Second Street from Bond Street to First Avenue. 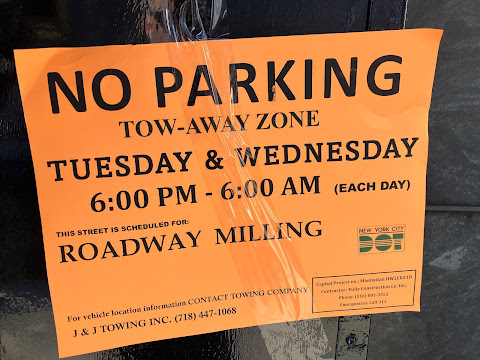 And, as these photos via Steven show, it appears workers will be using the reliable RX-900e, one of the most productive cold planers available (and more free RX-900e storage on First Avenue!) ... 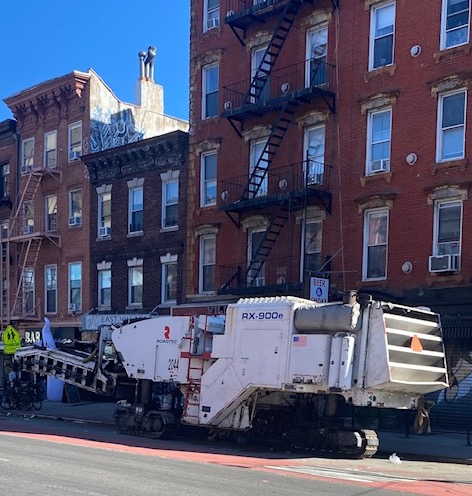 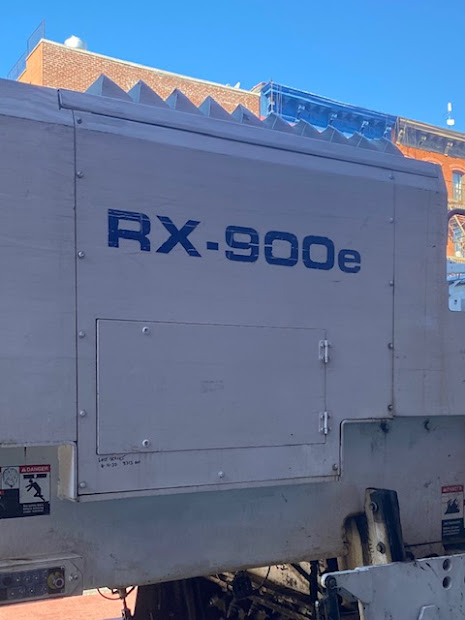 Sources say that "power and heavy-duty construction make the RX-900 the tool to own for high-productivity, half-lane, or full-lane milling."
Meanwhile, expect several weeks to pass before these milled streets are repaved.
Posted by Grieve at 5:00 AM

Email ThisBlogThis!Share to TwitterShare to FacebookShare to Pinterest
Labels: milling, milling and paving

It is the dumbest thing to mill and repave the two sides of the street that are being used for car parking. There's no wear and tear on that part of the street. There's a good showcase of paving just the middle of the street in locations where there are dining sheds. Waste of energy, release of dust, excessive noise: all of these can be cut 50%.

The city is milling out the street in November, the streets will be paved late November. Street marking season usually ends late November depend on the weather. That means there's a good chance that we won't have crosswalks on all those intersections from now until April (as happened in the past).

there's a very slight chance that we won't have crosswalks on all those intersections from now until April.

Why bother milling when the street sheds are scattered about?
What possible benefit does the neighborhood derive from such a hodge-podge approach?
Seems rather wasteful.

Also, with the winter weather right around the corner (plowing, salting & potholes) would it not make sense to do milling and repaving in, say April?

Taxpayers are being cheated at the expense of these dining sheds. More of a patch and fill job than a street paving

It's annoying that they don't demand the removal of the wooden sheds before doing this, what is taking so long?

"Tuesday & Wednesday 6pm-6am (each day)" could these signs be less clear? This is all courtesy of Eric Adams's hack-led, staff-bleeding DOT. https://nyc.streetsblog.org/2022/09/22/just-keeping-the-lights-on-low-morale-high-staff-vacancy-rate-hobble-department-of-transportation/

I can't wait to watch how those grinders maneuver around all the restaurant sheds on 9th St. It's gonna be quite a show!

Oh gosh, this is really bad news for crosswalk and bike lane markings... The city moves so slow that we absolutely won't see them again until the painting season resumes some time in the spring. Very worried about this; it can be scary crossing the street as is.

It wasn’t that long ago that the street was repaced. And it’s happening again this week. I really do want to know, do they check on the state of the street? It was only a few years ago, right? when they did this. I know it’s an unrealistic request but I would prefer DOT spend money to truly repair the sinkholes on 1st Ave and the insane shaking that our buildings now have to handle.
And why couldn’t they at least wait until the sheds change? Aren’t they supposed to change to “cafe” style areas and not sheds in 2023/24? Set a schedule where they are all off the street and then repave.