Details about 'Hallowless,' a tribute to Jack Terricloth this Sunday 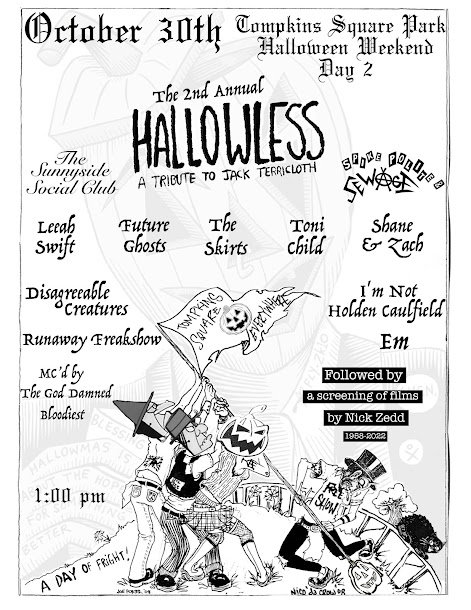 Here's info about an afternoon of music and a tribute in Tompkins Square Park this Sunday... details via the EVG inbox...

Oct. 30 is the second annual gathering of Infernites in Tompkins Square Park. Fans of the circus punk cabaret collective The World/Inferno Friendship Society will gather to celebrate the life of their departed lead singer, Jack Terricloth.
For 23 years, the Halloween-obsessed World Inferno band leader dependably threw an annual October bash called Hallowmas. Their lovingly devoted cultish fanbase would descend upon New York year after year to attend the festivities. Tragically, Jack passed away in May 2021 and World/Inferno's Hallowmas tradition ended.
After a Halloween exhibition of Jack's artwork last year at C-Squat, fans gathered in Tompkins Square Park and played cover songs. Out of respect for not calling the event by the same name, the fans dubbed their gathering "Hallowless" and said they would be back next year to once again pay their respects. A tradition was born, the future is now, and Hallowless 2.0 is happening Sunday at 1 p.m.
Jack Terricloth lived in the East Village from 1991 to 1994. He tended bar at The Continental and volunteered at Reconstruction Records. While in the LES, he fronted the punk band Sticks & Stones. After starting The World/Inferno Friendship Society in 1997, they went on to terrorize LES venues for the next two decades. World Inferno regularly played at ABC No Rio, Brownies, CBGB, Mercury Lounge, the Knitting Factory and the Bowery Ballroom.
Throughout the past year, friends and family put together a tribute record that is coming out on Oct. 30. Proceeds going to benefit MusiCares. Hallowless in Tompkins is part of the record release celebration.

After the Hallowless celebration, the space in the Park will turn over to the Nick Zedd film festival at 6:30 p.m.

Their Peter Lorre project at Webster Hall was a fantastic production and show.