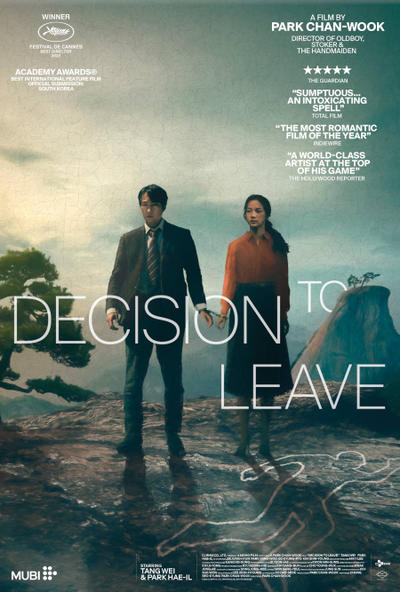 Park Chan-wook's well-regarded South Korean crime drama "Decision To Leave" continues its theatrical release (it opened on Oct. 14 at the Angelika, where it remains).
The film arrived yesterday for a run at Metrograph down on Ludlow. (All the screenings look to be sold out.) It's also playing at Essex Crossing on Delancey and the Alamo Drafthouse in the Financial District.
Chan-wook, whose work includes "Oldboy" and "The Handmaiden," was the winner of best director at the 2022 Cannes Film Festival
Highly recommended, if this looks like your thing...
Posted by Grieve at 9:45 AM

This looks like another must see. Asian cinema has delivered some of the best movies over the past few years, with Parasite (Korea) and Drive My Car (Japan) as a couple of must see movies if you enjoy intelligent filmmaking. Agre with Eden
Bee, Oldboy is a classic as is Train to Busan, but my favorite is The Chaser, about a crooked ex-cop turned pimp searching for one of his missing girls while a serial killer is on the loose in Seoul. This movie is Silence of the Lambs meets Taxi Driver and is truly frightening. Of course one of the greatest movies of the year with an Asian cast is Everything, Everywhere All At Once iwhich should earn the amazing Michelle Yeoh an Oscar nomination.