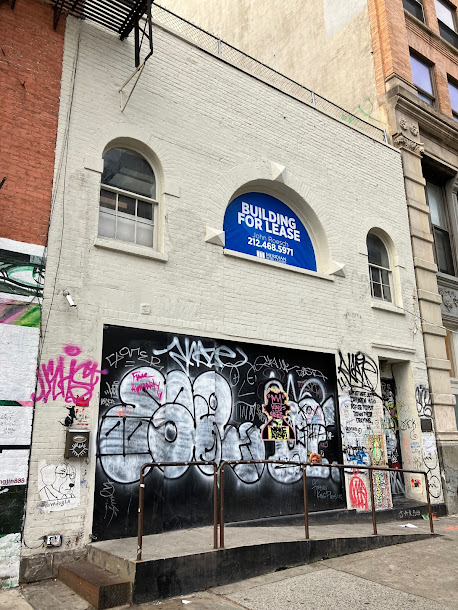 The building at 57 Great Jones St. between the Bowery and Lafayette is now on the rental market... 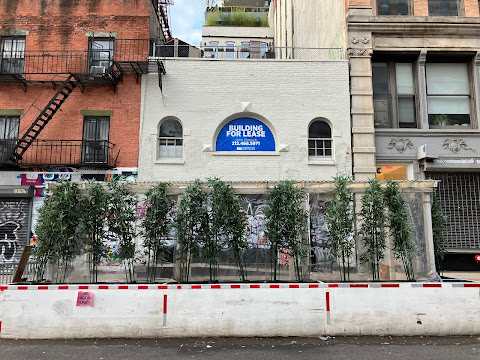 The two-level building was once owned by Andy Warhol ... and Jean-Michel Basquiat was living and working in the second-floor studio at the time of his death in 1988.
Here are some particulars via the listing at Meridan Capital Group:
• Historic full-building restaurant opportunity
• Previously owned by Andy Warhol and art studio/home of Jean-Michel Basquiat
• Fully equipped restaurant space with venting & gas in place
• Massive skylight in ground floor dining room
• The lower level consists of 2 walk-in boxes, dry storage and office space
• The second floor consists of open loft space with high ceilings and multiple skylights
• All uses considered
The back of the ground-floor space had been home to Bohemian, an invite-only Japanese restaurant that provided some intrigue for food writers 10-plus years back. (As we understand, Bohemian's parent company, Play Earth Inc., owns the building.)
In July 2016, Village Preservation, in partnership with Two Boots Pizza, unveiled a commemorative plaque to mark Basquiat's time here from 1983-1988. 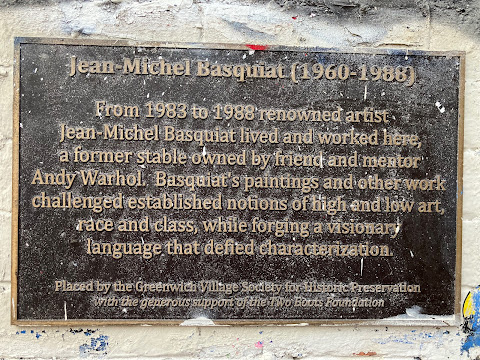 The building's façade served as an ad-hoc memorial to Basquiat through the years. As we first reported back in February, workers painted over all the tributes... though, as the top photo on this post shows, the tags are making a comeback.
You can read this post at Village Preservation for more history of the building, which once served as the HQ for Five Points Gang ringleader Paul Kelly.
Previously on EV Grieve:
• Tribute-filled façade of former Basquiat studio painted over on Great Jones
Posted by Grieve at 5:29 AM

Gee does it include that run down ugly looking shed?

Presumanly you will no doubt be happy to know that they followed your advice and all the original Basquiat graffiti and painting was scrubbed off by the corporate renters who went in after he died. If you want to live in a sterile looking neighborhood, of course there's always Hudson Yards...

it's Basquiat, an artist who started with graffiti. The graffiti is the point. It's an homage to the landmark.


"I just wish I was living in a bubble where I could only see Targets and Glass boxes forever." Troll

Wish I could afford to buy it and turn it into a museum.

his estate has plenty of money if they wanted to do something with it...

Hopefully it won’t end up being razed and replaced with a glass and steel condo for transient metros. I’d like to imagine that someone with resources and love for nyc history would jump on the opportunity to live there.