The Gallery Watch Q&A: Sneha S. on 'Portraits of the Revolution' 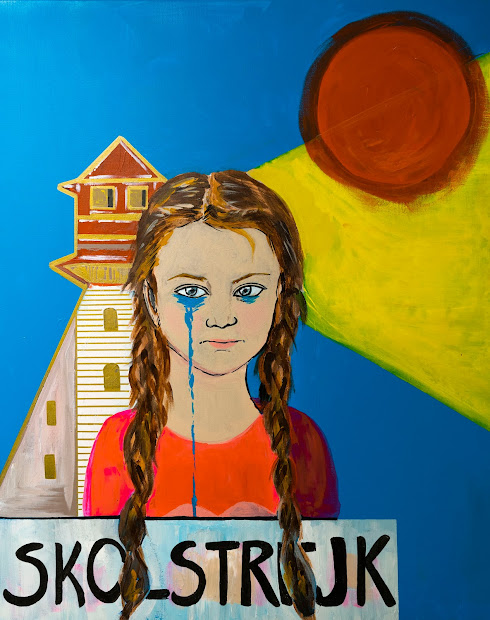 Interview by Clare Gemima
Photos courtesy of EVGallery
Sneha S. is an artist and activist based in Queens.
Sneha explored art from a young age due to her rough childhood upbringing. Born in Silchar, Assam of India, Sneha's family shifted to the United States in hopes of "achieving the American dream." In turn, the harshness of capitalism destroyed her family and caused a strain on both of her parents' mental health.
To cope with child abuse, Sneha turned to art for solace. Art took a pause when working as an adult in New York City took over. But after getting out of a tumultuous relationship, old wounds opened up again, and Sneha had to address her childhood trauma with the help of therapy, and of course, art came back into her life. Since then, Sneha has continued exploring her artistic capabilities using acrylic, ink, watercolor, and colored pencil.
"Portraits of the Revolution," Sneha's first art show now on display through Nov. 30 at EVGallery on 11th Street, is a syndicate of portraits that symbolize social and political injustices to bring attention to the policy changes we need in this country.
What can an audience member prepare to see in this exhibition?
Six portraits out of the eleven had already been made. Portraits of Loujain al Hathloul and Greta Thunberg were created for a prior showing, Fearless Teardrops, representing the oppression and resilience of women and children. Bernie Sanders was painted as my homage to the presidential nominee when he withdrew from the 2020 elections for the second time.
Dannelly Rodriguez was painted to honor the housing rights activist and movement lawyer. I met him at one of my co-organized events and witnessed him leading the NYC Black Lives Matter Movement protests in response to the murder of George Floyd and Breonna Taylor. "Pelehonuamea" (below) — a painting created after my trip to Hawaii in 2021 and my self-portrait called "Ego Death" — was made as a therapeutic piece in response to my trip to Miami during the year the pandemic hit.
After connecting with Kerri, the director of EV Gallery in March of this year, I formulated the remaining five pieces inspired by what I had already compiled within my tiny studio apartment that I work out of in Queens.
After getting arrested for civil disobedience at the 2016 presidential debate, I dealt with a lot of anxiety and frustration through art. So, it was about time I decided to forge both of these worlds together to visualize what lies in my heart as an activist.
Of the 11 portraits hung in EV Gallery, what work resonates with you the most, and why?
The portrait that resonates with me the most is definitely "Pelehonuamea." (Seen below.) When I went to Hawaii using my stimulus check, thinking I would never get an opportunity like this again, it was important for me to learn and understand the way of the land. Pele is the Goddess of Volcano and Fire, a deity, an integral part of Hawaiian culture.
The more I read about her as I explored parts of the island that weren’t accessible to tourists, the more I felt connected to her. I feel like I have a raging fire within me as I witness the suffering and oppression of the people caused by the oligarchy in place. I think it also makes sense because I am a Sagittarius, one of the three fire signs of the zodiac. 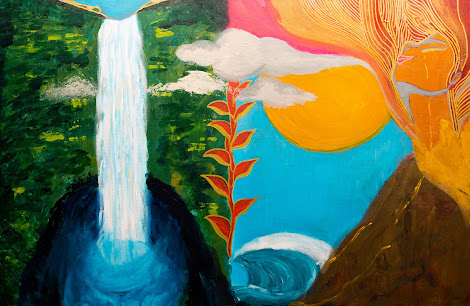 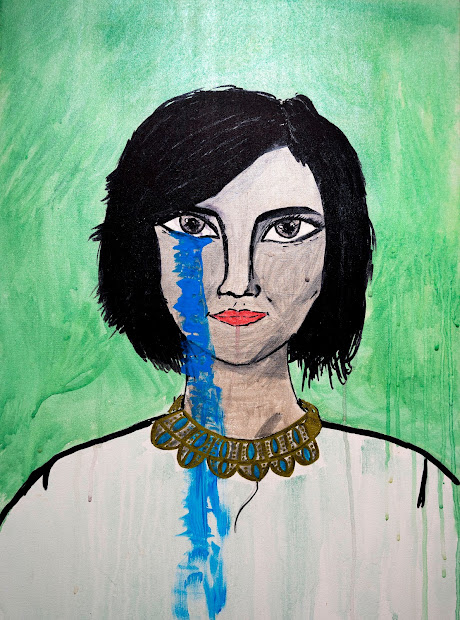 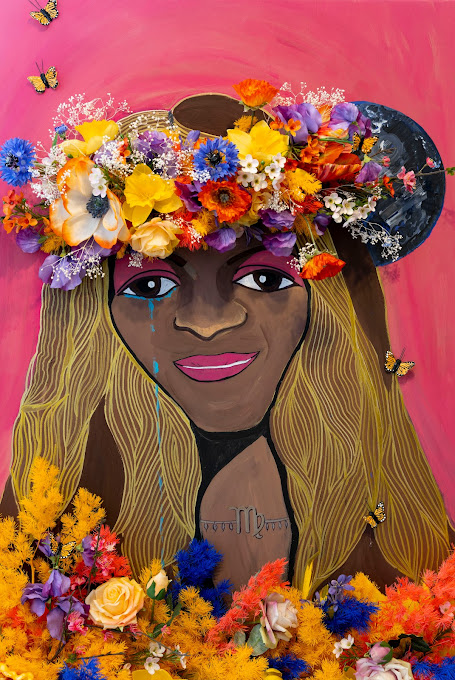 Is this the first time you have visualized your activism? Are you interested in the history of agitprop?
Actually, it’s not. I had my initial exposure to agitprop when my portrait of Karl Marx was published in a socialist magazine called Reform & Revolution, in which my talk as a guest at the Brooklyn Museum of Art for "Frida Kahlo: Appearances Can Be Deceiving" was also highlighted.
Ruth Ann Oskolkoff, an activist with Extinction Rebellion and DSA, also used the same portrait of Karl Marx on the cover of her book of political quotes, "Capitalism Must Be Composted."
I understand that you were born in Silchar, India. How has coming as an immigrant to the United States propelled your strong interest in political activism?
I remember the joy I felt on the last day of school in India when I told my friends I was going to the U.S. From my father to my teachers, they all reflected on the idea of the American Dream. Still, it was tarnished when I experienced racism and discrimination upon entering the United States. I observed both my parents struggle to make ends meet, affecting their marriage and mental health. I was on the receiving end of both their anger and frustration.
Because my parents couldn’t afford childcare, I spent the majority of my childhood in solitude, drawing and sketching. I knew at the age of 8 that what I was going through was a lot bigger than me, and I knew there was something wrong with the system we were and are still living in.
What political crisis takes up most of your attention, and why do you feel so strongly about it?
The climate crisis takes up most of my attention because it is the biggest threat to humanity, our natural environment and the world’s species. The response in the past few years after scientists came out in 2019 saying we have 12 years to act on climate change has been abysmal. The United States is one of the three biggest contributors to climate change, and continues to participate in acts of war, which has been the most damaging to our environment.
What sort of message do you hope to send with your portraits?
All these movements — Black Lives Matter, Indigenous Lives Matter, Climate Crisis, atrocious foreign policies in Yemen and Palestine, New York City Housing Crisis, LGBTQIA+ rights, and the sovereignty movement — point to the singular perpetrator, the United States government – local and federal, needs to be held accountable and put forth policy changes. Citizens United, which allows wealthy donors and special interests to use dark money to influence elections, needs to be repealed.
Occupy Wall Street was a big movement that showcased how incredibly imbalanced we were as a society. At the same time, the poor and the working class struggle continued to be watered underneath a crumbling bridge. This means access to universal healthcare, abolishing student loan debt, prioritizing the climate crisis as an emergency issue, providing living wages against theorized inflation, and decreasing the cost of living. It's absurd that billionaires’ wealth has risen further since the pandemic hit the world. Power needs to be brought back to the people.
What is next for your political and artistic career in New York?
I am working on a couple of potential projects, but I am really excited by the idea of formulating a mood board that represents my culture and where I come from. It has been 27 years since I returned to India. A trip back to my homeland is definitely in order to inspire this project further because I plan to highlight the story of my aunt, Sharda, who was burned alive by her husband and in-laws for not meeting their dowry standards. Her horrific story needs to be painted. 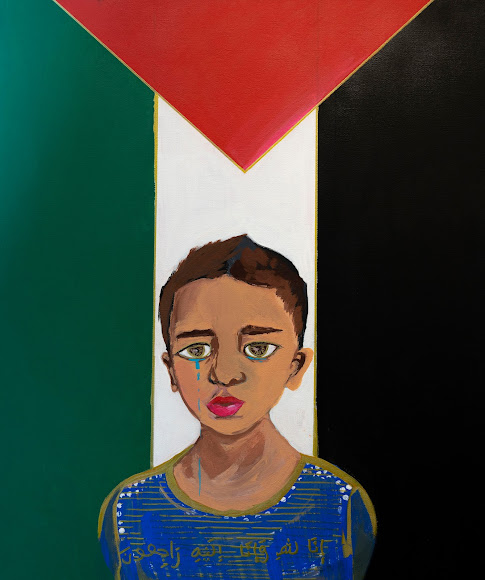 EVGallery, 621 E, 11th St. between Avenue B and Avenue C, is open Thursday to Saturday from 1-6 p.m. and by appointment. Find contact info here.
~~~~~~
Clare Gemima is a visual artist and arts writer from New Zealand, now based in the East Village of New York. You can find her work here: claregemima.com.
Posted by Grieve at 10:30 AM

> Because my parents couldn’t afford childcare, I spent the majority of my childhood in solitude, drawing and sketching.

Such struggle, wow. Such uplift in such amazing arts.

What a beautiful show! So many captivating pieces of art! Great job ❤️