7 years later, the sidewalk bridge is coming down on the NW corner of 3rd Avenue and 9th Street 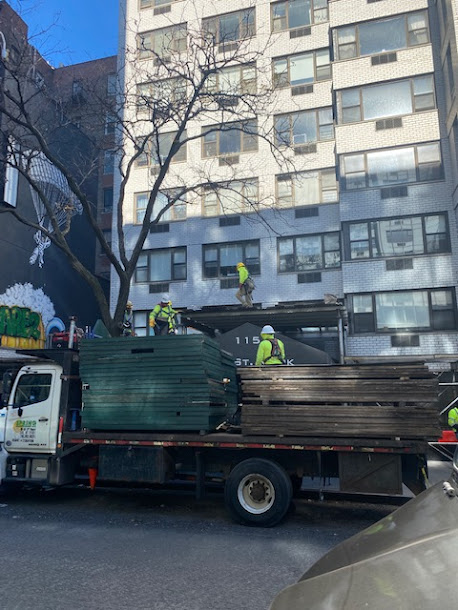 Workers from the Department of Miracles were out today... starting to remove the longstanding sidewalk bridge from outside the St. Mark at 115 E. Ninth St. ...  which wrapped around the storefronts along Third Avenue up to 10th Street... (thanks to Bruce Tantum for the initial tip!) 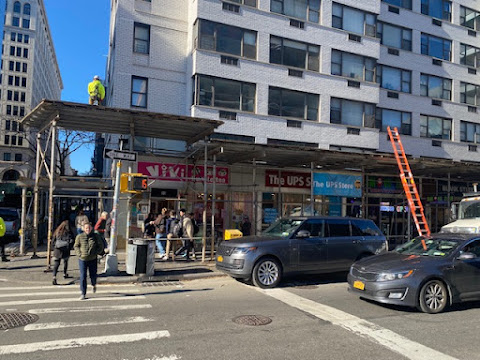 A worker told EVG correspondent Steven that the bridge had been up for seven years, which seems about right. (A Google Street View shows the bridge in place in 2016 but not at the next increment back in 2014.)
In May 2016, a 10-by-10-foot section of the facade started to separate from the building on the 15th floor. (At this point, the bridge had been in place for seven months.) The city closed Third Avenue while the repairs were made.
Posted by Grieve at 2:00 PM

The city needs to review its facade laws (i.e. Local Law 11). There's a good episode about it (tongue-in-cheek) on HBO How to with John Wilson. Having scaffolding up for 7 years seems absurd.

Just in time to have to put it up again soon, no doubt. The city's façade law is poorly thought-out, to say the least.

Man! Now I have to use my umbrella when going by this block.

Very informative (and funny) episode. Has me thinking about scaffolding A LOT now !