About 'Bomb Pop 2,' an 'ongoing conversation' at Bullet Space 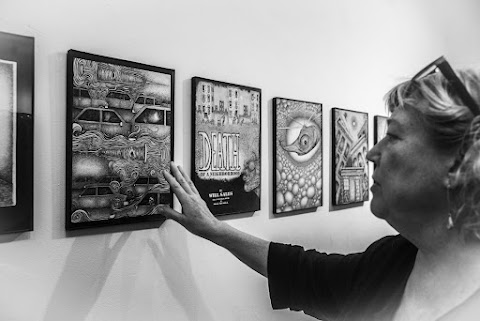 Photos and text by Daniel Efram
Bullet Space is currently showing "Bomb Pop 2," a group exhibition featuring Fly Orr, Mac McGill, Andrew Chan, John Farris, Michael A. Gonzales, Andrew Wilhelm and Maggie Wrigley (above), who's serving as the curator.
The original "Bomb Pop" took place in 2012, and this 2022 edition is dedicated to honoring the late poet and illustrator John Farris.
This is a group of NY artists with roots in the Lower East Side squatter community. The gallery itself is a former squatted space. "Bomb Pop 2," revisited on the 10th anniversary of the original show, continues the ongoing conversation between these artists and their work that started a decade ago. 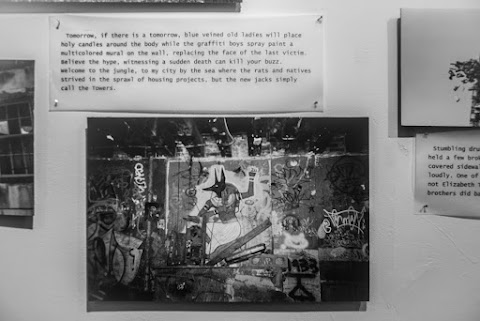 "Michael Gonzales and I curated the first show. We have been collaborating for years — my photos and his words," Wrigley said. "These are fragments of a story that he wrote. It's an afro-futurist dystopian story inspired by Sun Ra, and my photos are fragments of the past East Village, which was pretty dystopian, too, so it's a kind of time-travel connection. Being movie buffs, we call it 'Prevues of Coming Attractions.'"
Regarding Wrigley's photography, Gonzales stated, "She captures the various beauties of the city: the ugly beauty, the concrete beauty, the sad beauty and joyful beauty. As a writer of noir short fiction, I'm attracted to that dark/light sensibility in her images." 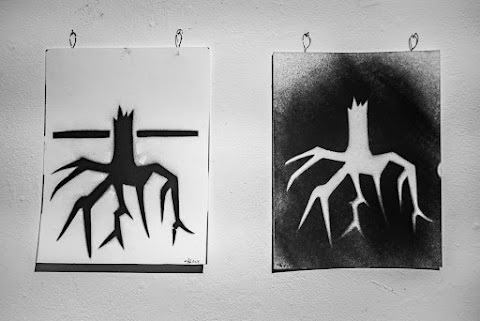 Fly Orr, a teacher at the Lower East Side Girls Club, is perhaps better known for her squatter zines and "PEOPs, Portrait & Stories" project. For this show, she installed stencils, using a language of symbols as a different way to communicate her love of the community. (See above.)
Mac McGill is a native New Yorker and former squatter, now a tenant owner of his former squat.
"He makes incredibly detailed and moving pen and ink drawings," Wrigley said. "His work has addressed housing and environmental issues of the neighborhood for decades." 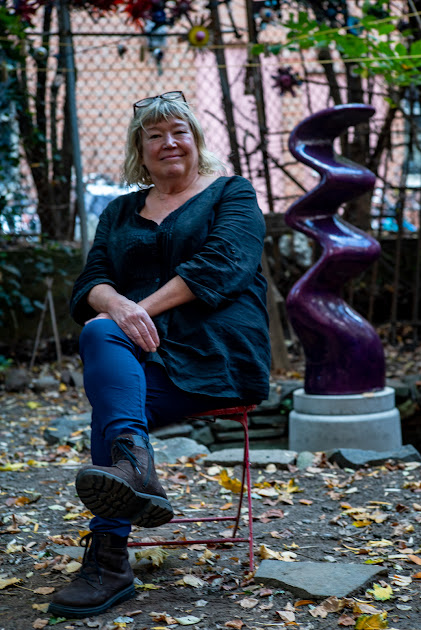 Sculpture artist Andrew Wilhelm has been helping to nourish next-generation artists through his work with Pratt and Cooper Union. The flowing, smooth lines of his pieces in the gallery's garden [seen behind Wrigley in the above photo] feel like his sculptures are an extension of nature. His work in the gallery employs a Renaissance-era technique to make plaster simulate stone but with wild colors instead. 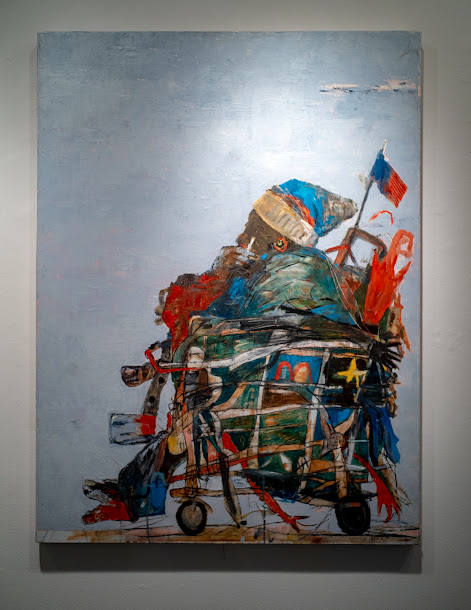 Australian artist Andrew Chan makes playfully critical paintings of the United States, his adopted country. Seen above in the portrait titled "The Collector," Chan connects the darkness of consumerism and corporations with the playful idea of assembling them all in a shopping cart headed down the block, conceivably a reference to our own presence in late-stage capitalism. 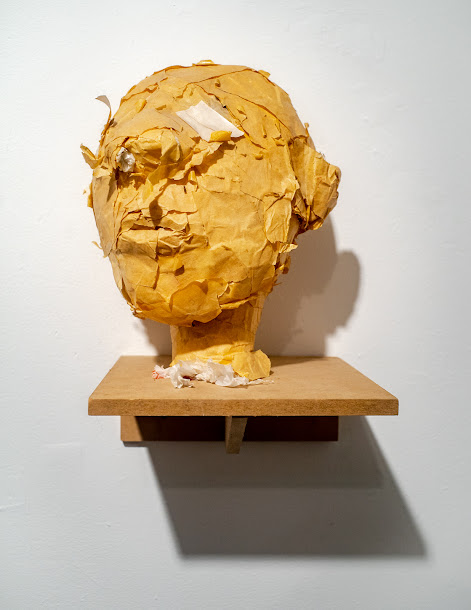 John Farris lived in Bullet Space for the last 25 years of his life.
"One of the proudest things we’ve done as a collective was giving this poet a place to live," Wrigley said.
The back room is dedicated to Farris, who died in 2016.
"When John had trouble writing, he started drawing. And he drew and drew and drew. He had piles of work in his apartment. He did a lot of self-portraits and people he met on the street," Wrigley said. "He also made these incredibly soulful head sculptures [above] made out of shopping bags and masking tape."
East Villagers should make their way to Bullet Space at 292 E. Third St. between Avenue C and Avenue D for this inspired group show that speaks to the past and harkens to the future. The gallery is open Saturday and Sunday from 1-6 p.m. (Viewings are available by appointment by emailing Wrigley at: maggiebullet292@gmail.com.) The space will not be open on Thanksgiving weekend.
The show's closing party is Sunday, Dec. 18, from 6-8 p.m., and includes performances by Lorraine Leckie, Puma Perl, Jennifer Blowdryer and Faith NYC.
Top photo: Wrigley with work by Mac McGill
Posted by Grieve at 9:00 AM

How awesome is EV Grieve? We are so lucky to have this wonderful blog!!

Looking forward to performing with these fabulous woman. It is a wonderful show, so honored to be a small part of it.

The art looks FANTASTIC. Love the paper sculpture and the cart collector.