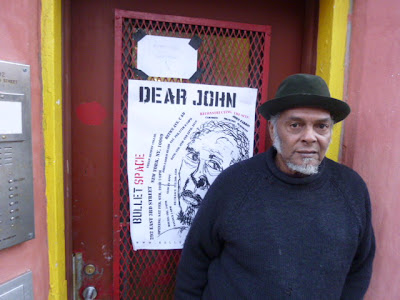 John Farris, a writer, poet and longtime resident of the Lower East Side, died in his East Third Street apartment of an apparent heart attack on Jan. 22. He was 75.

The Villager this week has a lengthy feature obituary on Farris:


With his sharp wit and abrasive personality, Farris was for decades an integral part of the Downtown literary and jazz scenes. He performed at a wide range of venues, reading wry, lyrical poems and densely crafted prose that both celebrated and satirized the people of the Lower East Side. He insisted that you listen to him — whether you wanted to or not.

From 2008, here's a video featuring stories by Farris ... set to an original score and composition by Jumaani Smith with photos by Marlis Momber ...

John was a friend to many, and took us young’uns under his wing back when he was running open mikes at the Neither/Nor Gallery. I’ll never forget the time he took four or five of us kids over to Sweet Basil to see Sun Ra and the Arkestra. We’d only known John a couple of years, and he was telling us all sorts of bullshit stories about all the famous jazz men he knew and was friends with, and we were taking it all in with a big grain of salt.

After the (amazing) show, every damned member of Sun Ra’s band came over to our table, going “Farris! What’s up? Where you been, man! C’mon out and party with us!” and Farris was like, “Nah, I’m gonna hang with these guys.” I never felt so cool in my whole life. There were a lot of moments like that with John.

Sensitive Skin compiled a handful of readings from Farris, which you can find here.
Posted by Grieve at 4:30 AM

All the outrageous and loved Icons and Freedom Fighters of the LES are going now. I didn't know he had died until I saw the lovingly written piece by Sarah Ferguson in The Villager . Over the years I smoked many a joint of very strong ganja with John and we both had great mutual respect for each other and being stoned with him and listening to his thoughts on anything and everything was something that was part of the reason I loved living in the neighborhood. I don't live there anymore and I wish I could attend any memorials being put together for him but honestly all the people and things I loved about the "East Village" are dead or bulldozed. Goodbye John and I won't say rest in peace because that phrase really means nothing so I say gone but loved and not forgotten.

Well said, brother John. Sadly it is all done... We, however, are fortunate enough to have lived through all the best of it and have those memories. Which is the gift that life gives us and truly makes us a bunch of lucky motherfuckers...

I write this from Hollyweird as I chose to no longer live in "the city that was". We are the lucky ones to have experienced all we did. Even though it is all done, when you wander those streets - it is still far better than anywhere else... There is still magic in the air at certain times and the phrase "only in New York" still has a good connotation to it. The ghosts and spirits and vibes are still there and can be felt in the right moments in the dead of night. Lucky ones we are...