Check out the Bagel Belly on 3rd Avenue 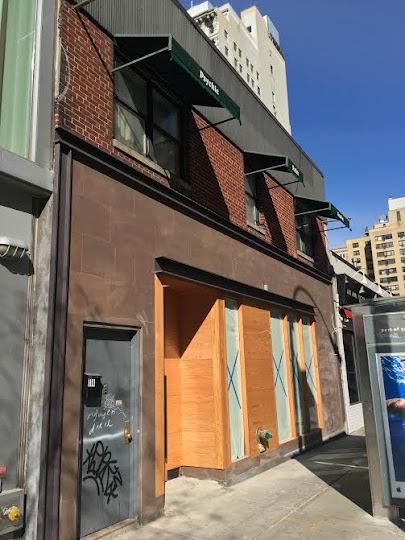 Workers removed the plywood around the storefront at 114 Third Ave. near East 14th Street ... the incoming deli/cafe will go by Bagel Belly... 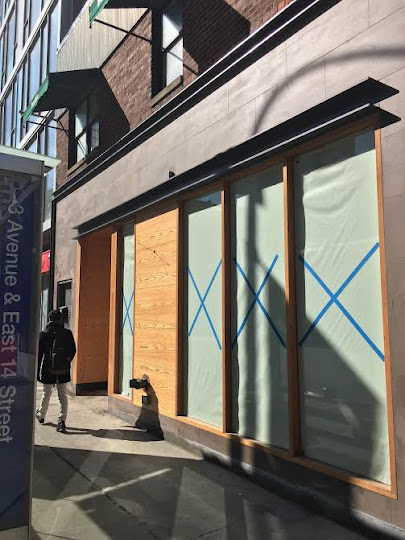 The proprietors, who also own Namu Deli & Grocery at 252 Third Ave. between 20th Street and 21st Street, were on CB3's SLA committee docket back in December for a beer-wine license. (This item was not heard during the committee meeting.)

The space was, until the fall, home to Robin Raj/Delicacity. The address was formerly the Grace and Hope Mission.

Previously on EV Grieve:
Updated: Bagel Belly coming to 3rd Avenue
Posted by Grieve at 4:14 AM

Hey, what's the latest in the bagel place that took over the DeRobertis Pastry place on 1st Avenue? Did they make a go of it?

Good idea. Wash down the bagel with a beer. Or two. For that bagel belly look that chicks and guys dig.

I miss Robin Raj. Good luck to the latest bagel place. The last one (in the dorm at 3rd Ave/11-12th) didn't last long.

Has the new iteration of TSP opened yet on 2nd Avenue? Have not read anything about it here so am guessing not yet.

@10:26am: That last bagel place (in the NYU dorm on 3rd between 11-12 Streets) didn't last for many reasons, one of which was the near-complete indifference of the owners/managers when it came to customer service. The owner was mostly absentee, and I guess he thought the $$ would just come rolling in due to the word "bagel".

No sign of TSP on 2nd Avenue as yet...
As for indifferent customer service at the bagel place in the dorm, I didn't experience that; the guys behind the bagel counter were always pleasant and other than that, it was clean and one could actually cop a table to read the paper... anyway, it's gone...