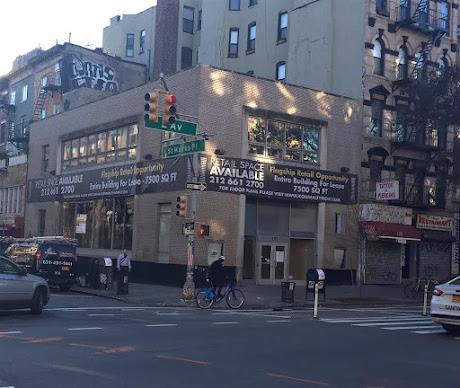 Last time we checked in on the former Chase branch on Second Avenue at St. Mark's Place, someone seemed pleased that the bank had merged with the location two blocks to the north... 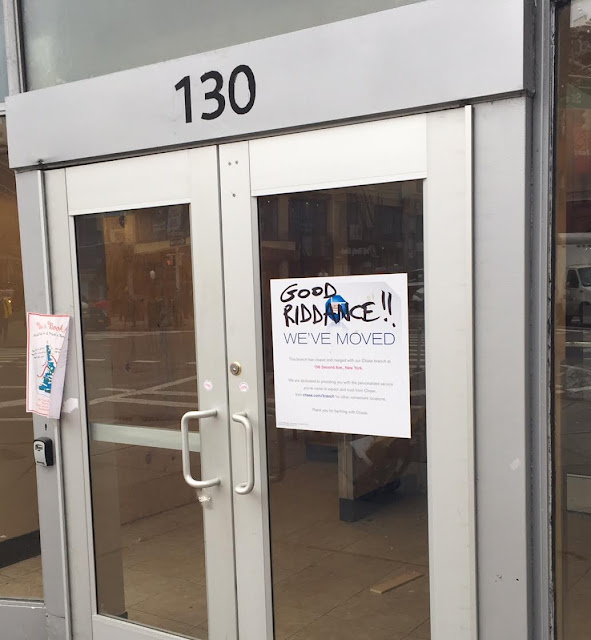 [Photo from January by Steven]

Apparently there weren't any takers for the space, which had been on the market since last summer with an asking price of $72,000 a month, per the listing. The address was being marketed for use as retail, a restaurants/bar, office space or a gym. (The listing remains on the Icon website.)

The Commercial Observer reported in August that J.P. Morgan Chase sold the 2-level space to Stellar Management for $12 million. (Stellar and Icon teamed up to buy the gas-challenged No. 128 next door.)

The former Chase site allows for redevelopment of the 2,380-square-foot site into a mixed-use retail and residential project of 9,520 square feet, the Observer noted.

EVG regular commenter nygrump is among those who speculate that both 130 and 128 Second Ave. could potentially yield to some kind of large development. Here's nygrump on our last post on this address: "If Icon owns the corner lot and also the building next door where The Stage is, then they are probably strategizing to maximize the entire lot, take both buildings down and put up a tower. If zoning doesn't now allow, don't worry, it will. They'll do to 2nd Ave what they did to 3rd."

The one thing they do have going for them is that 128 is NOT landmarked.

I've a great idea. Let's tear this down and sell the rubble!

And we don't even need De Blasio's rezoning plan.

BRING BACK THE STAGE!

What's the zoning policy there -- is there any height restriction?

Oh, no! That building is iconic!!!

I wonder if this could mean the end of 124 Second Avenue, too, thus the end of San Loco (which is at that address) in that if Icon demolishes 128 and 130 Second Avenue wouldn't the owner of 124 sell out so he/she could get in on the action? I would not be surprised if Icon gobbled up all the buildings on the east side of Second Avenue between E.7th St. and St.Mark's Place. If San Loco closes I'm never stepping foot in the East Village again 124 2nd Ave. demolished or not.

7:42 am: I see what you mean, but doesn't that just give them a large footprint to play on? I'd suggest the a few hundred thousand dollars in improvements - all taken as expenses anyway - would pale next to $100 million in profit.

I don't think Icon knows the fight they have ahead of them if they try to empty 128. Tenants have been there for years and the neighborhood is ready to stand up against eminent domain and harassment.

I went and looked at Google Earth and then the OasisNet and ACRIS databases to check who owns the 3 small buildings on St. Marks to the east of the 2 storey corner building...for no reason at all I went to street view and looked at 2nd Avenue...you know the google street view still has 119, 121, & 123 2nd Avenue in their pictures? It was weird seeing the closed Ramen & Robatayaki palce on the corner, the restaurant and the Pommes Frites and Sam's Deli still there. It was taken on a sunny day.

'The neighborhood' has changed pretty dramatically. How many people who have moved here since 2001- Bloombergs NYC - are going to care about these buildings? Heres a hint. They dont. These are the folks who think the area is a dump and needs to be cleaned up. Ive overheard the conversations these people have. They could care less about long term stabilized tenants. Icon is very aware of what they are doing.They have the city behind them. The war has been lost. Its over.

Icon is so fucked.

The commenter at 10:23 makes an interesting point: The new residents moving into the neighborhood nowadays don't see the "old" things we all love with such fondness. They think the neighborhood is on its way up now with the new buildings and new restaurants, etc. At least according to the new neighbors I have talked to. They have no nostalgia for the way things were. They also grew up in a culture that values the shiny and new.

Will Waka Flocka Killah be the MC of demo?

The pretense of "improving the neighborhood" by removing anything that is not new or expense and is cheap enough for developers to buy, destroy, rebuild and sell to another group with much more money than the previous is the very definition of social economic cleansing. There is part of the city government that can stop or cares to stop this from happening. As long as those in power are getting a slice of the action either in bribe or tax income nothing will stop this. This kind of building blitz only occurred after a war or natural disaster, this land rush is only about unstoppable greed.

anonymous 10:23 i fear you are correct. and it figures that it's icon that bought the chase building. they have been eating up small parts of the neighborhood for years and now they own an enormous piece of it.
they are our horrific future and no one in city or state government cares.
money rules.

My building was recently sold to a developer in a group sale(182, 180, 178, 176) Second Ave. I'm the only regulated tenant in my building. A real estate friend said I could easily get a 6 figure, maybe 7 figure buyout. But I've been there for over 40 years. I don't want to move. Icon will not buyout 128. There are a lot of regulated tenants who I'm sure don't want to move. And Icon and Stellar are being watched. In the short run they could make a killing just developing the bank and get out.

This corner is doomed.

According to Dept. of City Planning website, 130 Second Avenue is zoned R7A -- explanation of what that means here: http://www1.nyc.gov/site/planning/zoning/districts-tools/r7.page?tab=2
Excerpt: The contextual Quality Housing regulations, which are mandatory in R7A districts, typically produce high lot coverage, seven- and eight-story apartment buildings, blending with existing buildings in many established neighborhoods. R7A districts are mapped along Prospect Park South and Ocean Parkway in Brooklyn, Jackson Heights in Queens, and in Harlem and along the avenues in the East Village in Manhattan.

They can't make money developing to the already allowed 9,520 sq ft considering what they purchased for and building out at a conservative cost $500/sqft. So nygrump's premonition of the steamroller with cash flying out the windows coming after a new zoning ordinance seems quite likely.

Seems like a good 60 Minutes Special uncovering how these zoning ordinances are changed, how these developments are sanctioned, and who's financially benefiting, and the whole practices almost comical disregard for actually making a dent in the city's affordable housing problems.

It's incredible how impatient and short sighed Icon appears to be. After a short time looking for someone to rent this space they have decided to demolish a really nicely designed 1920's building. The Apple stores in Soho and Meat Packing district are both in buildings from this era yet the dicks at Icon are unable to see any architectural value here. If they were such greedy assholes this building would could be a fantastic space for something that brings value to the EV instead they are not interested in giving back anything but only operate on a slash and burn model. Man I hate them.

The city shouldn't give them a demo permit until Icon gets the gas turned back on in 128. BRING BACK STAGE!!!

Beer store! Your enthusiasm is awesome.

@2-25-16, 9:32am,
Appreciate your concern for 124 2nd Avenue. I've lived in that building for several decades, and I don't give a damn about San Loco. There are horrendous neighbors, and if that's your only attraction to "come to the East Village", maybe we locals should try to get by without your visitation. Perfectly willing to share my beloved neighborhood, but please realize that we are not just a playground for you to hang out in. This is our home, a point made crystal clear last March as I watched a large portion of my block explode and burn to the ground.