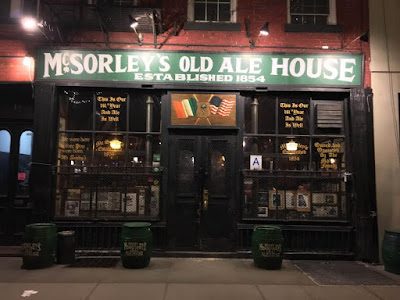 [EVG photo of McSorley's from the other night]

In one of our very first gazette dispatches here at EVG, we noted a new "old ale house" opening at 15 E. Seventh St. near Cooper Square.

At the time, it was not clear if founder John McSorley had appeared before CB3 or bothered collecting signatures of support or had proper permits for the big belly stove.

"I wish they'd keep their doors closed. I can hear the barkeep dropping nickels into the soup bowl from a block away."

"Don't we already have enough establishments around here in which to drink ale and eat raw onions?"

"Oh great, another place catering to the tanners, bricklayers and slaughter-house butchers."

"There goes the neighborhood."

Anyway, (I kid because I love), 162 years later, give or take eight years, McSorley's is celebrating today... 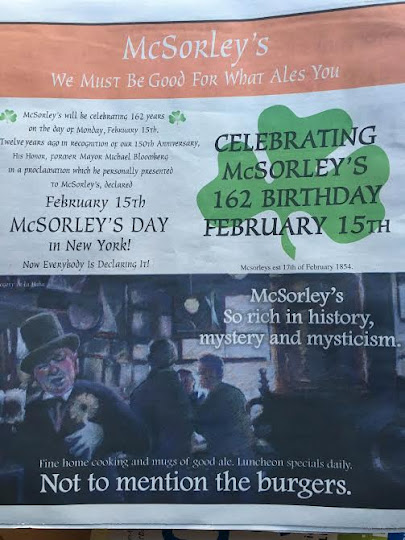 And as always when mentioning McSorley's and anniversaries... There are some doubters ("doubters gonna doubt!") about when McSorley's actually opened. Per New York: "Though McSorley’s claims it opened its doors in 1854, NYC historian Richard McDermott used public records to prove it really opened in 1862." Which means Lincoln never set foot in the place.

Still, Lincoln will likely make an appearance here today as in previous years... 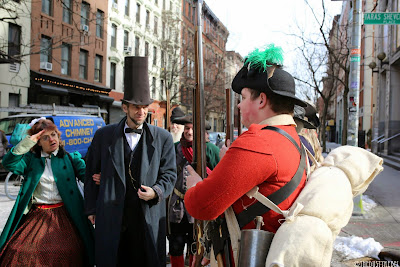 Maybe this year it will be the actor who starred in "Abraham Lincoln: Vampire Hunter."

A few photos from the day via Derek Berg... featuring the McSorley's militia... 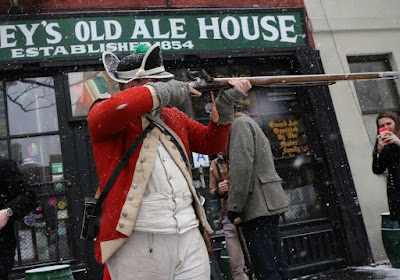 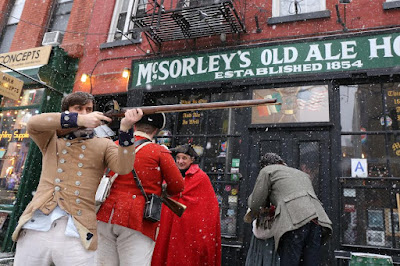 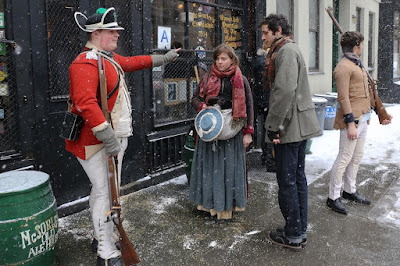 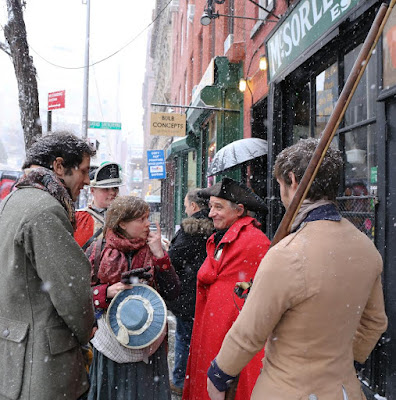 I assume there were many a olde ale houses like this one 150 years ago due to the Irish immigration to NYC and the ship building industry (Dry Dock) on the East River at the time. This place should be made a national historical and cultural landmark.

Even if Lincoln never set foot in McSorley's, it's documented—at least in Up in the Old Hotel—that Peter Cooper did. He hung out there a lot.

What is going on with that little tabby imp Minnie McSorely?

While the late Richard McDermott used City records he did not prove that McSorley's opened in 1862 - he only read the part of the page he liked, and was ignorant of the fact that the tax forms he used are and were kept in fiscal years.

Old McSorley is in the 1860 census as a saloon keeper, has an estate of $200. (not real estate) and that property across from the newly opened Tompkins Market would be valuable and expensive in 1862.