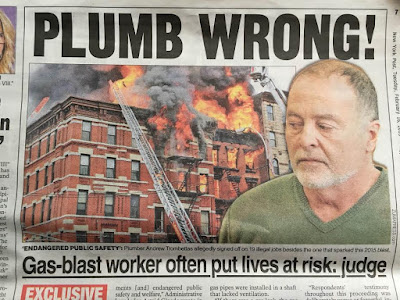 Andrew Trombettas, the master plumber who allegedly supplied his license to an unqualified worker involved in the deadly March 26 gas explosion on Second Avenue, signed off on 19 other jobs that violated regulations, the Post reports.

According to the article:

Trombettas “was negligent, incompetent, or lacked knowledge of or disregarded relevant laws; made material false or misleading statements on documents [and] endangered public safety and welfare,” Administrative Law Judge Astrid Gloade wrote in calling for his license to be yanked.

Many of the violations went undetected by city inspectors because the law allows “master plumbers” to “self-certify” certain jobs.

The Buildings Department audited about 400 jobs where Trombettas obtained permits and issued 82 violations — including multiple violations in many cases. The judge upheld most of the violations and concluded that Trombettas’ license should be revoked.

Last Thursday, the D.A. charged Trombettas with two counts of Offering a False Instrument for Filing in the First Degree, a class E felony.

The D.A. charged four other people with second-degree manslaughter: Dilber Kukic, the contractor; Athanasios Ioannidis, an unlicensed plumber; Maria Hrynenko, the landlord of 121 Second Ave. and other nearby properties; and her son, Michael Hrynenko Jr.

82 Violations and just NOW you're revoking his license?

Stiffer penalties are needed. For all involved.

"Many of the violations went undetected by city inspectors because the law allows “master plumbers” to “self-certify” certain jobs."

The idea is master plumbers worked hard to get to that level and would be reliable. At the end of the day the truth comes out, humans are shits, my dear, to paraphrase old Bill

It just keeps getting worse... Doesn't it.

When the DOB and other agencies that regulate the construction industry view their job as making sure there is zero interference with construction work rather than making sure it is done safely and in compliance with the law, this is whah happens. One of those agencies where they need to fire literally every employee and put a fresh crop in. All they seem to do is collect bribes.

Of course he should have his license revoked, permanently.
But is that the extent of the punishment for being the partial cause of this tragic disaster?