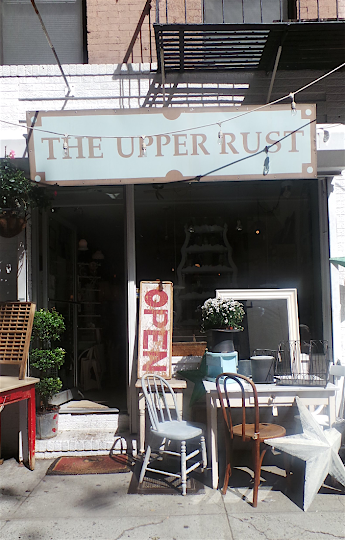 The 14-year-old antiques shop on East Ninth Street at Avenue A is closing ... and moving to Chelsea.

Here's part of the email the owners sent to their customers... 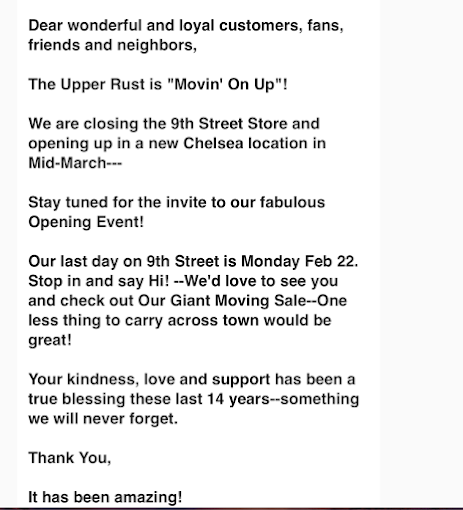 This marks the last business in the corner building. According to one previous tenant here, landlord Icon Realty either hasn't been renewing leases or offering new terms with unmanageable rent increases.

Cafe Pick Me Up (who moved into part of the Gnocco space on East 10th Street) and Dusty Buttons (who has a new storefront further west on Ninth Street) were the most recent tenants to vacate. 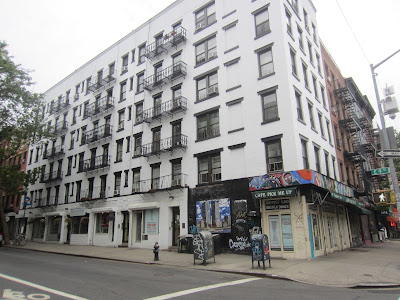 Previously on EV Grieve:
On East 9th Street Dusty Buttons is closing after 125% rent hike: 'Saying goodbye will hurt like hell'
Posted by Grieve at 12:04 PM

Email ThisBlogThis!Share to TwitterShare to FacebookShare to Pinterest
Labels: 145 Avenue A, Icon Realty, The Upper Rust

Icon is destroying the East Village.

As soon I as I found out Icon purchased this building I knew this block was in for big (not better) changes. Furniture needs floor space for display, high rents make this whole category of business nearly impossible today, I know because I'm in this business. For a vintage dealer to survive they need to handle more expensive merchandise which of course eliminates many old clients. All of the charm once synonomous with the East (West) Village is being removed for the sake of landlord profits and the conversion of a residential neighborhood into a nightlife district.

The people selling their buildings never get any heat for cashing out. Why is that? Somebody took the 10.1 million. Balance the criticism.

slumbag corpo-cartel real estate labbyists landlords. Yes, but the paradox is no one will want to live here and pay their b.s. rents.

It is truly sad to see The Upper Rust leave 9th Street. Beautiful little store! Greedy developers like Icon are killing the East Village. All the stores are now closed in this building, most of the tenants have been forced out of their apartments. The tenants who remain have been enduring almost a year without gas, frequent and prolonged heat and hot water outages, reckless and aggressive construction and daily harassment. Best of luck to The Upper Rust!

Can someone please explain the business model? In detail? I get that the owners are hoping for higher rent and anticipate it will compensate them for foregone rent at a lower rate, but at some point you're losing money by having a vacant space, right? I mean, I can have a teapot company that sells $10000 pots, but it's not going to work too well if I never come down on price.

This is really too bad. Upper Rust is a great shop. Bought many gifts there and the people who ran it are so friendly. Will be missed.

Anonymous said...
Can someone please explain the business model? In detail? I get that the owners are hoping for higher rent and anticipate it will compensate them for foregone rent at a lower rate, but at some point you're losing money by having a vacant space, right?

As I understand it, landlords with vacant retail spaces get a tax deduction for them—which explains all the empty storefronts in the city.

Whoever thought Chelsea would be cheaper than the EV?

No, landlords do not get a tax deduction. That is a common wives tale.

I wonder if landlords keep storefronts empty in hopes to land a high paying tenant (chain business) the way a beautiful gold digger does not marry for love? The motivation must be money and profit these people only care about that.

If landlords don't get a tax deduction, why do they leave spaces unoccupied sometimes for years? Why don't supply and demand balance in the commercial real estate market?
For how many years have the commercial spaces on St. Marks just west of 2nd Ave. been vacant?

It's not a tax deduction -- it's that they get to claim a loss.

The reason why ilandlords keep stores vacant for so long was the best explained to me once by a commercial broker. He said most owners have an extremely inflated view of the value of their own properties and always think they can get more money on every deal. If these landlords really needed the money, they could just reduce the price or be open to negotiation. Obviously most of them have plenty of cash flow and reserve funds so that they can wait years and years to get the highest price for their precious little spaces. So the next time your landlord complains that he isn't getting enough rent increases to keep up with costs, ask him how come he keeps his retail stores empty for years of a time.

a vacant store decreases taxes because it decreases income
it also increases expenses that further reduces taxes
and of course loss and then depreciation and all that other stuff
what would you call that?
there is no benefit to renting for less when owners can just wait for a higher paying tenant

So sorry to see them go.

Chelsea has shoppers. We have drunks.

Love it! The very uniqueness of the places that the EV provides, which attracted those who moved here and are moving here, paying exorbitant prices for their 'luxury' condos/apt., are disappearing because of their arrival. Those places are now being replaced by the dull, boring, bland, clean tower of steel and glass skyline, much like in Zenith or the Midwestern generic skyline. Now they'll slither and shrivel up and go back to where they come from.

http://www.newyorker.com/business/currency/why-are-there-so-many-shuttered-storefronts-in-the-west-village
This article addresses reasons Landlords are not in a rush to fill commercial spaces.

I heard that they are removing the staircase between pick me up and storefront next to it. Probably gonna combine into one big shit-show.

When we (Parlor) left that location we were paying $950 a month in rent. The infastructure of the building was really scared and they later had some fires within the building. I'm sure rents have gone up but maybe their space in Chelsea is just nicer?

This blows. Even though I've never purchased anything there, it was always nice to walk past it. Felt like part of the neighborhood. Now, its extinct. The EV is changing fast...:(

But I'm hearing that landlords aren't giving out long term leases in this market, so what's the point?

Is it possible they want to redevelop the lot? The problem with tenements ultimately is that, as retail and residential both, there are limits on how luxe they can go.Across from the park...it's pretty prime property.

The way they made that stretch of 9th street look so magical was like nothing else in NYC....

The EV used to have landlords that were into a steady income stream from the building. Icon, in classic predatory equity mode, does not have a business model based on a steady income stream from tenants but on flipping buildings at huge profits. That is why they are notorious for ridding buildings of tenants, empty buildings sell at much higher prices than those with existing tenants. They are not in the business of providing housing, they are in the business of flipping properties i.e. greed is good.

@ Dusty -- magical is the exact word. So charming, so sad to see them go!

Savor the lack of banks and Walgreens while you can.

I will check them out in Chelsea.
Melanie
East Village Corner

A big loss for your neighborhood . I came across it 10 years or so when my barber Eric opened The Neighborhood Babershop 2 doors from UPR RUST
WHERE in Chelsea is their New Lication ?
Thank you ����