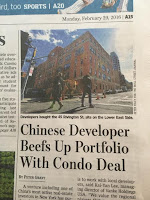 Here's more from The Lo-Down, who has been following the saga:


[T]he sale was anticipated after the Allure Group, a private nursing home operator, closed the building in December. The company, which purchased the property last year for $28 million, has stated that the failure to obtain state Medicaid reimbursements forced the closure. The Allure Group also paid the city $16 million for the deed, which had previously restricted the building’s use to a “Not-for-Profit Residential Health Care Facility.”

Community Board 3 and City Council member Margaret Chin supported efforts to lift the deed restriction because they thought it meant the 200-plus-bed nursing facility could continue to operate as a for-profit entity. They were furious with the de Blasio Administration for allowing the building to slip into the hands of luxury housing developers.

A rep for the developers told the Journal that they plan to house upwards of 100 luxury units in the building, which overlooks Sara D. Roosevelt Park. (You can read more about the deal at BoweryBoogie.)

Late last year, an EVG reader, who had been a patient at the facility, heard the news from staffers about the impending closure of the building between Eldridge and Forsyth ...

"The building is incredible with 12-foot ceilings and a penthouse floor that has a view from the UN to all of Midtown and Downtown. I knew it was doomed to have developers all over it from the first day I got there."

Is there really only "luxury" and "affordable" housing now? How about "slight reach" or "well-built" or (dare I say!?) "cheap"?

Community Board 3 and City Council member Margaret Chin supported efforts to lift the deed restriction because they thought it meant the 200-plus-bed nursing facility could continue to operate as a for-profit entity.

Why do I not believe this at all?

Goggla is spot on. The Chin has never met a major RE development she did not like. I call BS on this as well.

So the City's agreement to lift the deed restrictions was worth $72 million dollars more than the City was paid. Hmmm...

Does the community board do anything other than blame the mayor's office? What BS! CB3 is a joke.

More new development that will "sell out" yet you want see much activity in the building. 1 Avenue B I always notice to be pitch black. Same thing as the Scarrano building on Bowery. I guess maybe the residents are always out or away...

Is Margaret Chin that stupid or that venal?

Is NYC (DeBlasio) so stupid as to let this go through?

Is ANYONE "minding the store"?

This news combines the worst of stupidity, venality, carelessness and slipshod-ness.

I'm more convinced than ever before that developers simply OWN EVERY MEMBER OF NYC's GOVERNMENT. There is no other sane or rational explanation - NYC is just GIVING the place away. SMH

This is a crime against our community and the response so far is a nasty Board resolution from CB3. Why haven't Chin and Brewer called a press conference at Rivington House to call out the Mayor for this and call for a protest rally or something. There should be a massive neighborhood protest over this. So why isn't this happening, because Chin and Brewer are in the pocket of the RE cabal. Chin supported the NYU plan and Brewer is trying to shut down the Small business survival act by introducing some pathetic piece of legislation. Village Center for Care was essentially forced by Chin and the CB to sell this to a for profit Nursing Home operator instead of letting them sell it on the open market. So that's what they did and the deed should have been modified to allow for a for profit nursing home, not lifted entirely. What idiot allowed this to happen? Who was asleep at the switch? Who got some of the 16 million to look the other way? Whose head will roll for this? This smells too much like an inside job with a whole bunch of people laughing all the way to the bank. This can't be allowed to just fade away into the next news cycle.

A massive neighborhood protest? I commented on this before but it bears repeating. The 'communuty' is increasing made up of people who support this type of development and would never protest this- or anything else for that matter. When are people going to finally realize that 'the community' doesnt care about what you think it should care about. Wake up. Its over. Every new development brings in more people with this mindset. The population has changed. They have their own priorities and dobr care about some old folks home or AIDS treatment facility or a longtime business. They just dont.

Margaret has also repeatedly tried to raze the Elizabeth Street garden, and obviously if she's able to place some of the overflow of patients who are displaced from this facility, there will be less heat on her.

Agree, inside job. How stupid do they think we are?

@Scuba Diva, do some research as this was not a community garden until the rich folks in Nolita found out HPD had plans to build affordable housing on the lot. For years this lot was leased by HPD to a guy who had a private collection of lawn sculpture there, it was under lock and key, it hosted private parties. Then the City decided to build housing on it so it suddenly became a garden. Build affordable housing for seniors from the area as we need housing. Have you seen the PR campaign for this "garden", bunch of white yuppies and there kids whose real concern is there property values. Chin might be crooked but she is doing the right thing by pushing for senior housing on this site.

Anonymous 9:15 said: Chin might be crooked but she is doing the right thing by pushing for senior housing on this site.

Not when there is so little open space in that neighborhood and buildable sites nearby that would mean not having to raze the garden.

Here's an amny piece about the garden in which the owner of the sculpture says the garden was indeed private until neighbors came forward a few years and offered to volunteer their time and labor—like the community gardens our neighborhood.

8:01pm: You're right and it's sad, b/c the people who move in now are transients and they have no interest in anything about the neighborhood in the long run, b/c they aren't going to be here in 3 or 5 years.

They just want the post-college "conveniences" and they can't imagine that this was ever a true neighborhood where people put down roots.

I really would like to know who's getting rich on this particular deal (other than the developers). Pockets are being lined.

Add to this the insane amount of capital being funneled into jumbo mortgages and ... Well, if you've seen The Big Short you already know the punchline.

It's unlikely since this is a Condo Conversion that will be filled with post college transients of a year or two. Most likely people buying for a longer term and they will shop and dine in the neighborhood. Creating all types of housing should be a priority at this time if the free market does it fine what is needed is housing as this city's population grows.

I think I am done complaining about the new people moving into neighborhood that are considered transient. After 15 years in the neighborhood (20+ in the city), I feel that this may be my last - I simply can't afford it. I too will be transient...just at a turtle's pace.

So, on one hand - the people that are moving in now almost can't be blamed -- to live in the east village for any length of time is simply becoming unsustainable.

And sure, maybe they are partially to blame. But, honestly - when I moved to the city, if someone asked me if I was looking to stay, I would have said no. I was in my early 20s and the idea of planting roots anywhere was absolutely off my radar. Isn't that the point of your 20s?

I'm sad. But, I get it. What I saw on tv, in magazines, etc. of NYC is what lured me here. The grit, the energy, the creativity, the this-is-like-no-other-city-ness.

The newbies are being lured here too - but now that NYC is the chain-store shitshow that it is, the people that are getting lured have changed. And that's a bummer.

I still blame Sex and the City.

@12:20pm: I agree with most of what you have said, but I have had a very different experience from yours. I moved to the East village after college with the very specific intention of staying for the long run. So far it's been over 40 years for me (and no, I'm not rent-regulated).

You say: "... when I moved to the city, if someone asked me if I was looking to stay, I would have said no. I was in my early 20s and the idea of planting roots anywhere was absolutely off my radar. Isn't that the point of your 20s?"

For myself, I was born in an outer borough & from a young age it was my intention to live in Manhattan long-term, and I've done that. The point of MY 20's was to get a job, get a foothold in a decent apartment, and to pay off my student loans. Putting down roots WAS always my plan; it's just who I am. (And yes, I freely admit that jobs & apartments were both much easier to get back then -- but the flip side is that my friends & relatives wouldn't visit me b/c of what a "bad" and "dangerous" neighborhood I'd moved into!)

I wasn't much of a party-animal, but honestly I literally couldn't afford to be one at that time in my life. I had to make choices because of limited $$, and I'm not sorry for that -- I'm just sorry that the neighborhood has changed so radically for the worse in recent years.

And I'm still planning to stay put, even though I don't anticipate that the East Village will ever be anything other than college-kid central in the future.