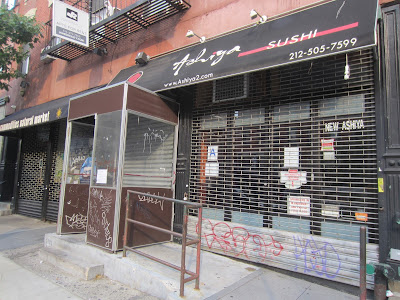 Looks as if the East Village will have another fried chicken option.

According to CB3's agenda for March, an entity going by Delaney Chicken Union Square LLC will appear before the SLA committee for a liquor license at 167 First Ave. between East 10th Street and East 11th Street.

The name of restaurateur Daniel Delaney (who also operates BrisketTown out in Williamsburg) is on the public notice form (PDF) posted on the CB3 website.

Last September, he opened Delaney Chicken in the UrbanSpace Vanderbilt market in Midtown. He told Eater last summer "that his fried chicken is 'very different' from the other popular versions around town as it is batter dipped, rather than being dredged in seasoned flour. He promises a unique texture in the coating which comes spiked with the requisite secret seasonings."

There isn't any other information posted to the CB3 website at the moment about the First Avenue Delaney Chicken, such as its operating hours. CB3's SLA committee meeting is March 14 at 6:30 p.m. in the CB3 office, 59 E. Fourth St. between Second Avenue and the Bowery.

Seems to be a pretty crowded market already around the neighborhood for fried chicken. For starters, this location is one storefront away from Fuku, David Chang's popular fried chicken sandwich place. And there are places like Bobwhite on Avenue C, Root & Bone on East Third Street, Blue Ribbon on East First Street and Second Avenue, The Redhead on East 13th Street, just a name a few, that have a fried chicken following.

Delaney tells Eater that the space is not guaranteed to be an outpost of his UrbanSpace Vanderbilt stall Delaney Chicken. "We are exploring a number of options, including getting a liquor license in that space, but we have not signed a lease," he says. (And we changed our original headline to reflect this.)
Posted by Grieve at 4:16 AM

Chicken is for the birds.

Redhead wins for overall taste and chicken succulence. Bobwhite wins value. Blue Ribbon, ha. And Root & Bone uses too much thyme or maybe its lemon. I look forward to trying this but am suspect of light batter dipping, fried chicken is a guilty pleasure food and "less is more" needn't apply.

Fried chicken dipped in batter to me sounds worse, not better than the conventional flour-dredged style.

Meanwhile, you have to travel if you want vegan fried chicken. (Yes, there is such a thing; for some reason, people have always had the idea that vegans are ascetics who don't like a little crispy grease now and then.)

With all the cruelty and abuses of the chicken "factories", I won't be supporting this place.