A quick look inside the new Mamoun's on St. Mark's Place 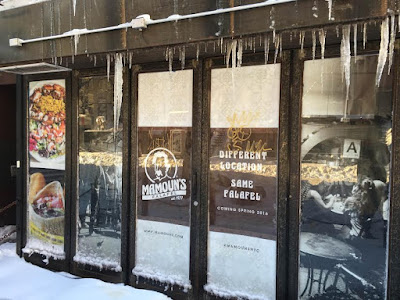 [This photo is from January]

As previously noted, the 45-year-old Mamoun's is moving a few storefronts to the east (No. 22 to No. 30) on St. Mark's Place between Second Avenue and Third Avenue.

EVG contributor Derek Berg took a look inside the space the other day to see how the renovations were going... as workers are de-Red & Gold Boil-ing the interior... 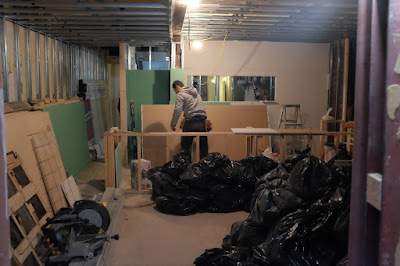 The larger space for the falafel restaurant is expected to open this spring.

More about the Mamoun's Falafel move on St. Mark's Place
Posted by Grieve at 4:12 AM

Email ThisBlogThis!Share to TwitterShare to FacebookShare to Pinterest
Labels: Mamoun's

mamoins move is the most positive post in a while.
a decent local store moves down the block to a bigger space.
love his lentil soup.
hope his prices don't go up too much.

Thank God some of the old popular places have managed to stick around. My coworker who's a Syrian refugee said the owner is from Syria, if anyone cares. I assumed the owners were Egyptian. Why? No clue!

I hope those giant icicles are permanent, they add a cool touch to the place.

Ya they're Syrian for sure! I could use a chicken kebob sandwich right about now...

hope his prices don't go up too much.

Considering that they're a small chain—with locations on MacDougal street and in New Haven—they probably won't go up much if at all.