Report: Crime is down so far in the East Village in 2016 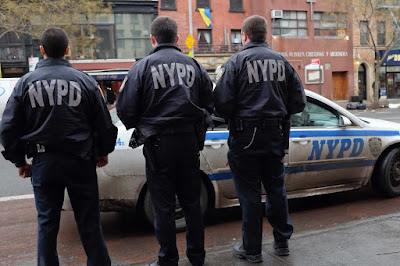 The Villager attended the most recent Ninth Precinct Community Council meeting ... and here's the takeaway, per the paper:

Most of the crimes in the precinct have been grand larceny — the result of people leaving their property (often credit cards) somewhere and it being stolen.

Meanwhile, the NYPD announced earlier this week the launch of CompStat 2.0, "a newly public, online version of the data tool that the department has used since 1990 to map crime statistics by precinct," per Gothamist.

Play with the map yourself here.
Posted by Grieve at 4:11 AM

This is great news for developers like Icon, not only is there lots of luxury living the but there is little crime, welcome suburbanites.

Five stolen vehicles and what 30 bikes? Not a great indicator for the neighborhood when you can never be fully confident your personal transportation isn't being stolen or messed with. But I guess I'd take 20 stolen cars for zero face slashings or stabbings, so keep up the good work?

This is more proof that there was no need to put up that police tower at Tompkins Square Park in the first place. At the same time there has been a rash of slashings going on around the city. Another guy was slashed on the R train today just because he bumped into some lunatic.. There was a slashing at the skate shop on Lafayette Street and another one at Silver Spurs on Houston a week ago and those slashers are still on the loose. Crime may be down but for some reason a bunch of people are going nuts. Have they put up any Police Towers or done anything differently because of all the recent slashings? No. In fact Comissioner Bratton is dismissing the 20% increase in stabbings and slashings citywide as isolated incidents. Since January, there have been over 550 of these "isolated incidents." But don't worry, crime is down.

Bullshit stats I don't believe. I think they're doctored for Icon and other big real estate to enhance the chances of the rich to buy and rent their properties then move in. Not a week goes by where EV doesn't mention a violent or property crime. This is more NYPD lowering crime stats to make themselves look good/the city safer than it really is for real estate. If it's not that they did it before and they'll do it again.

It's easy for crime to drop when the popo don't want to file reports.

What a jike... The police are playing with stats... That's why crime is down... My super called the police on SantaCom Day. Trespassers were partying on the roof of our building - drunk, hanging over the edge. The policeman said it wasn't his problem and left. That night I called the police. The building was shaking from 3 parties... 2, 3 in the morning. The police were a no show. Drugs! Underage drinking! Noise! And no police. CRIME ISN'T DOWN. But crime stats have become relative to the administration in power.

"@7:54 - Are you advocating for higher crime?"
Do you really live in a world that is that simple as in yes or no answers tell the whole story?

As the EV becomes sanitized by the developers from all things alternative, artful or non-chain businesses these same developers will justify the gold rush and often forced eviction of long time residents as proof that what they are doing and have done is best for NYC. Low crime reports is the grease needed to get Mindy and Skip to choose NYU of Iowa State University.

As if the NYPD would do anything about the crimes of the affluent pieces of shit who tear this neighborhood apart on any given day. If the Calebs, Winstons, and their trashy cousins, the Joshs, left the neighborhood because of "police harassment" who's parents would fund the Pussy Galore buildings popping up? It's the Douchebag Economy (tm) and the NYPD are fine with it. As the vile Republicans used to say about AIDS in the 80s, it's killing all the right people.

Crime down huh, That's interesting considering I was attacked within their jurisdiction and they then fabricated a case against me. That's a brilliant way to live isn't it? Get attacked in the street and have the police fabricate something against you!!!! I believe and I know for a fact that some of the real crime comes out of the police department itself. Do they tabulate the #s of crimes they commit and add those #s to the total?

Or better than that how about the cost to the community, business and life within the area? What are those #s? The police cause more crime than anyone is willing to admit or bring attention to. Keep drinking your beers and mixed drinks to keep yourself oblivious to the world around you.

People leaving their credit card somewhere and someone using it? Really? That's the bulk of the grand larcenies? Give me a break.

it all comes down to to the point of view of the mayor and how he wants to deploy his army,

Crime down in two of the coldest, darkest months of the year? NO WAY!

Unless someone is murdered the 9th Pct won't even take your report if you go there and ask them to write a report.

Anyone who believes government statistics is ignorant of the fact that the criminal entity at Havana on the Hudson jiggers them every which way but loose.