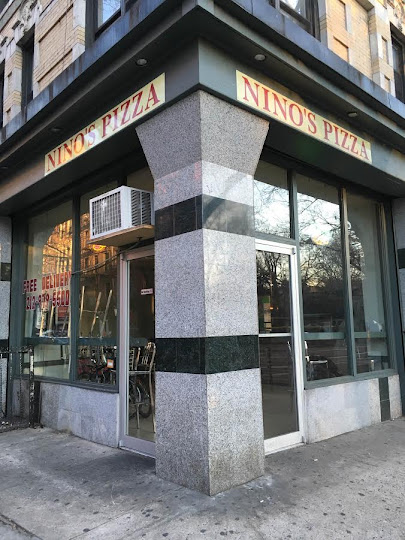 On Wednesday, the signs on the door at Nino's stating that the pizzeria would reopen were removed... along with the help wanted signs...

As reported on Tuesday, owner Nino Camaj accepted a low six-figure amount to walk away from his remaining 10-year lease and surrender his longtime space on Avenue A at St. Mark's Place.

Nino's had to close on Oct. 21 due to a gas leak in the building. On Nov. 17, the pizzeria was hit with an eviction notice. Camaj has said that the gas was shut off in the building without any notice to him.

In late November, Camaj's lawyers were reportedly in discussion with landlord Citi Urban Management to dispute the rent charged for the month during which they had to close due to the gas leak. However, a Citi Urban representative at the time told Bedford + Bowery that Nino owed rent for previous months — not just for the month without gas.

DNAinfo spoke briefly with Camaj, who said that he could no longer afford the $14,500 monthly rent. "I’m not making any money before I closed," he told DNAinfo in a story published yesterday. "I’m breaking even."

Camaj told DNAinfo that he would like to continue running a pizzeria in the East Village — if he can find a more affordable location.

Meanwhile, James Morrissey, who owns The Late Late on East Houston, had been after the Nino's space to combine with the former Hop Devil Grill next door to create The Honey Fitz, a destination serving a grab-and-go breakfast in the morning along with high-end cocktails by night... with WiFi and printers for freelancers and others to use during the day.

However, facing a denial for a liquor license from CB3's SLA committee on Tuesday night, The Honey Fitz team withdrew their proposal for the time being.

Morrissey said Wednesday that he "remains interested in the location, assuming all outstanding lease issues have been resolved," per DNAinfo.

Previously on EV Grieve:
The Honey Fitz in the works for St. Mark's Place and Avenue A (54 comments)

Nino's and Yoshi Sushi served with eviction notices on Avenue A

Report: The Honey Fitz on hold; and RIP Nino's
Posted by Grieve at 4:20 AM

Email ThisBlogThis!Share to TwitterShare to FacebookShare to Pinterest
Labels: Nino's, The Honey Fitz

Ah, poo. Nino's sustained me with $1 soft serve in 1997 when I was pregnant and couldn't drink with my buddies after the show.

This place can never open, we must do everything to fight it. Weekends are already hell along Ave A now the streets are under attack.

Well Nino would be welcome on 3rd Avenue, specifically the corner of East 12th Street where Amici was driven out by high rent. The dorm across the street also has a vacancy...and so many others... blah blah blah!

The owner of the Late, Late says he doesn't want to step on anyone's toes and be a good neighbor, hmm, let's see:
- Help force out Nino
- Negotiate a lease with a landlord who has allowed 30 apartments to remain without gas since August and has done nothing to resolve the issue
- Choose a location on a block that has 17 full liquor licenses within 500 feet
- Try to push a 4am bar with djs through the CB over the objections of the residents of the building and every block association in the area as well as every member of the CB 3 SLA Committee
- Insult the entire EV by stating that the area is trashy and in need of sophistication

Your off to a good start Morrissey

What a loss. Landlords are ruining small business in NYC.

If people are concerned about preventing this from happening as well as stopping the onslaught of nightlife establishments in other parts of the hood from forcing out daytime retail and turning the EV into a playground for transients as opposed to a neighborhood please sign-up for the CB 3 calendar. It will be sent every month and show who is trying to get a license where, amongst other things. Then come and speak at the meeting or send a letter. The meetings are long, but they are only once a month and if the room is packed with residents in opposition the CB will listen. We have seen it happen many times. Please don't be complacent and think that the ruin of our neighborhood is inevitable, because it is not. The link to the CB web-site is below. There is also a list of Block Associations, so see if you live on a block that has one and join it or start one of your own. This does take time, energy and effort, but it does work.

Try to come to CB3 meetings. I know its hard, in fact they are early so I can't often go.

Write Susan Stetzer and show your support or opposition!

We need to be UNITED against these predatory operators and landlords!

Owning a business in today's market is a headache and an enormous gamble. Especially, for restaurant and bar owners in the city struggling to stay afloat. I can't even imagine trying to pay rent in a neighborhood like the EV, where the rent and competition is fiercely high. Unless I was independently wealthy and could afford to lose when and if my business tanked, I'd walk away and call it a day. But many who have poured their blood, sweat, tears, and every last dime are left with nothing and simply can't walk away without feeling a punch to the gut. That is why I wouldn't do it. In the six years since I've relocated here, I've witnessed more closures since 2010 than since my arrival to NY in 2000. That is a staggering fact. While NIno's wasn't the best pizza in town, it wasn't the worst. It was a nice respite from other venues. There has to be a more effective tool or law in place that can allow businesses to grow without being obsolete a year or two after.

It would be interesting to see a statistical report of the number of small businesses that have opened and closed in the EV from say 2012-2016 in comparison to the years 2000-2011. I am sure the recent percentages will be eye opening.

Goddammit!! I will miss you, Nino's. This is heartbreaking. That place was special to me, I have eaten a lot of Nino's pizza since it opened. They were always so nice to me while I waited for my pie. I hope you open in another location. I'll be there for your pepperoni pizza. It seems to me that the Late Late's pushy interest has helped to get rid of Nino's. I will not be patronizing them.

Correction: I said I wouldn't patronize the Late Late and that is true, but meant to say the Honey Fitz which is looking to take over Nino's space. Restaurant Groups are ruining the ability for individuals to own. They have the money to muscle individuals out if they want the space, despite what the actual community wants. Don't give them your money to use against you.