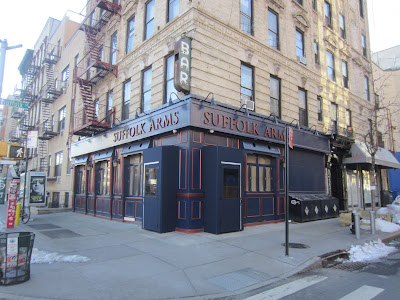 We first heard about Suffolk Arms back in September 2014 via The New York Times ... in a "bars opening soon" feature...

After some delays, the cocktail bar via Giuseppe Gonzalez, whose bartending credits include Golden Cadillac, PKNY and Dutch Kills, officially opens tonight at 269 E. Houston St. and Suffolk Street.

Here's part of a preview via Gothamist:

Like its roundtable approach to the drinking, which celebrates González's inspirations, the food and decor follow suit with a who's who and what's what of New York City and Lower East Side lore. Sixty hand-drawn portraits of Keith Haring, Jam Master Jay and other notable New Yorkers like the New York Public Library lions line the wood-paneled walls and windows.

And from Time Out:

An annotated menu touts 11 original cocktails ($14) like the Tough Room, which fuses a Guinness with a whiskey sour stout, as well as a selection of 13 "Something Like Classics" quaffs ($13), which play on time-honored libations from the likes of PDT's Jeff Bell and Jeffrey Morgenthaler of Pepe Le Moko in Portland, Oregon. A third section of the menu gives spirited proof to vodka's bonafides with drinks crafted by New York bar pioneers, like a Flatiron Martini from Julie Reiner and a Grapefruit Cooler from Audrey Saunders.

The 63-seat space features a food menu, including a Russ & Daughters Smoked Fish Platter ($22) and a matzo ball soup ($8).

As previously noted, nearly three and a half years have passed since there was a tenant here. The Local 269 never reopened after a flood wiped out the live music venue's equipment in the fall of 2012. The Local 269 space was previously home to Meow Mix and Vasmay Lounge.

Previously on EV Grieve:
Plywood wraps itself around the incoming Suffolk Arms
Posted by Grieve at 4:14 AM

Could this be the LES's first LES-themed bar? 100% un-authentic for those that missed it the first time around.

I got tired just reading the description. Just make me a drink and be done with it, sheesh.

Meow mix was the best

Sigh at $13/$14 cocktails and $22 cold fish plates. Still got nothing on Parkside's bottle beer and fooseball.

Looks like they put some thought into the place. However, sad as it is, I'm not at a point in my life where I can afford $14 cocktails. I've lived here 27 years and this is yet another place that is not for me or any other locals in a similar financial situation. I wish someone would open an actual neighborhood bar for neighbors.

Okay I can afford $14 drinks but why would I want to hang with others that think the is what a drink should cost.

I'll be going today to check the place out & support local business but as previous commenters have mentioned I can't see myself being a regular there. I'll have a cocktail or two then head to Parkside.

Right. Local business. Why must almost always a "small" "local" business that opens in the EV/LES has to be a bar or a cafe/coffee shop/restaurant, which really is a bar.

I chased and hooked-up with an "Amy" once at Meow Mix. It was the best of time and good ol' times.

à propos -- the owner of Meow Mix opened-up Cattyshack in Park Slope, which also closed, but was replaced by a live band/sports bar venue. So that's that.

Why must every bar that opens up have to have a theme? And what happened to Golden Cadillac again? Right.

There are plenty of places with great inexpensive beers and well drinks. This is terrible. Meow Mix was real great grungy old school and The Local 269 was fun and you could see bands and hang out. Now everything is so highfalutin.
No person with any sense of character will hang out here, that's for sure. Russ&Daughters seems to be making out on the gentrification. Good for them they don't live here anymore, we do.

Went last night, Giuseppe did a great job of putting this place together.

Serious though, that sounds quite apt.

Dear 10:36
Giuseppe did a great job. It only took 2 years.
And good job Giuseppe doing the bait and switch at Golden Cadillac like Alex Stupak.
Can't wait until you reduce this menu to bar bites and have a "music concierge" I.e. DJ.
Let's fast forward to the real concept.

I hate to sound old, but really who goes to a bar for the stupendous mixology talents of the planner or the bartender? If you don't like the taste of alcohol, move on and don't have people spending 10 minutes to create the Bourbon infused lower east side .