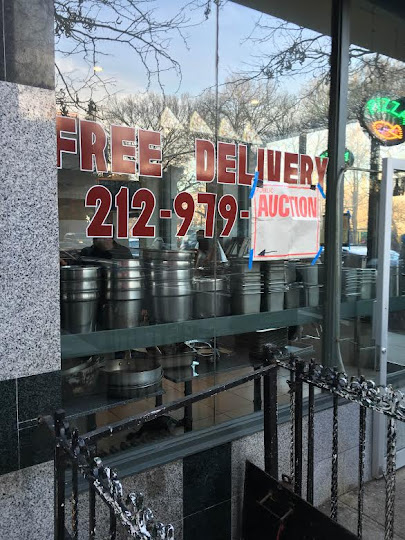 The auction is going on this afternoon at Nino's...various workers are carrying out the remains of the pizzeria, which is now closed for good on Avenue A and St. Mark's Place.

As previously reported, owner Nino Camaj accepted a low six-figure amount to walk away from his remaining 10-year lease and surrender the pizza shop that he opened in 1989. He had been in a dispute with the landlord over back rent and a closure due to a gas leak in the building.

James Morrissey, who owns The Late Late on East Houston, had been after the Nino's space to combine with the former Hop Devil Grill next door to create The Honey Fitz. Those plans are on hold for the moment, though Morrissey told DNAinfo the he "remains interested in the location, assuming all outstanding lease issues have been resolved."

Previously on EV Grieve:
The Honey Fitz in the works for St. Mark's Place and Avenue A (54 comments)

Nino's and Yoshi Sushi served with eviction notices on Avenue A

Report: The Honey Fitz on hold; and RIP Nino's
Posted by Grieve at 5:10 PM

I used to live right around the corner on 9th. Their gyro slice was a thing of beauty.

This really sucks. Can't they rent the space to Joe's?

FUCKKKK. That needs to remain pizza with a window!

All of these old school closures in the neighborhood are painful but some hurt more than others. Nino's is one of those for me. My old favorites - Sounds, the Stage, Yaffa, the Life Cafe, and Ess-a-Bagel just north of us - all forced out unnecessarily. And now Nino's too. Nothing real can remain, is that it, Bankers/Developers? You don't fool me, Honey Fitz. Let's see how long it takes them to put their offer back on the table now that all the dirtywork is done.