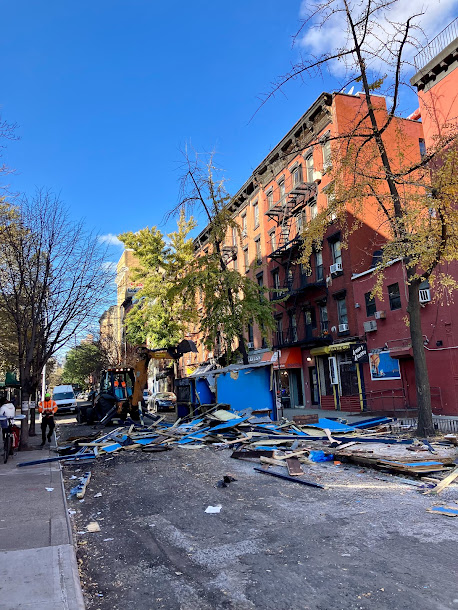 The EVG inbox is lighting up with news from Sixth Street and Avenue A... where as around noon, DOT workers are demolishing the curbside dining structure at Amor Y Amargo... 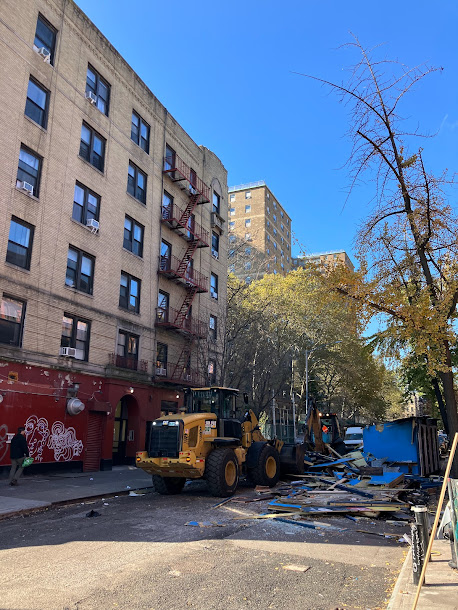 For this, the city has shut down Avenue A to through traffic from Fifth Street to Seventh Street. 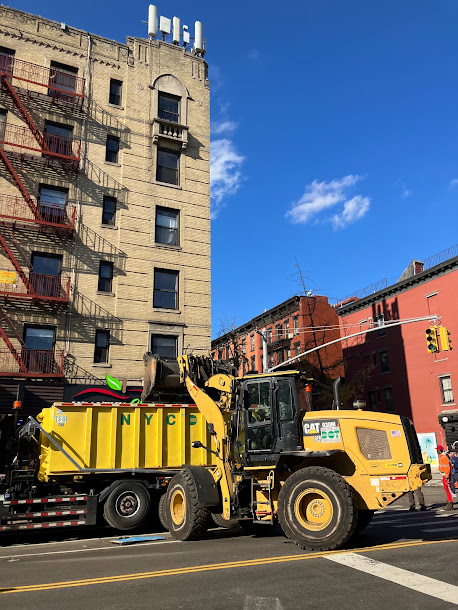 The space looked to be one of the nicer curbside structures around... though it hadn't been in service in recent months.
In August, the city started removing dining sheds from outside closed establishments ... or restaurant and bars that were no longer using the street spaces. (To be clear, Amor Y Amargo remains open.)
The city said this about curbside structures that are still in use:

First comment. Nothing smart or original to say. Just wanted to be first, before the usual flood.

Not saying the city should have to, but this sure doesn’t look like they are going to store it for 90 days…

Now it will become an eyesore free car parking spot

Why are they using city resources to demolish this, when the restaurant is still open. Wasting city money that can be used smartly elsewhere.

The city's policy is a joke. I submitted a 311 regarding the abandoned shed on Fifth Street and 2nd outside of the closed Eros Restaurant . The city closed out the file with this notation:
The Department of Transportation inspected the condition and determined that it is in compliance with its standards.

@2:37 the eyesore you are talking about at those citibike docking stations. An example is the one on 11th st and 1st ave across from Venieros. In between the two docking stations is a section that has not been cleaned since the dock has been installed.

Perhaps they bill the restaurant for the city time?
I’d hope so

It definitely sounds like we're encouraging parking to come back before having any part of the (temporary) program that encourages reuse or engagement of otherwise compliant sheds.

The complainers are getting what they want. And here we are in the thread talking about the now-10-year-old Citibike program as another thing that needs to be ripped out, when the docks in this area are some of the most highly used in the whole city. That... sounds like it's par for the course with neighborhood politics.

Sheds are definitely coming down either by the owners or the city. 9th between 2nd and 3rd is starting to get some reprieve. Three are in the process of bring deconstructed.

Where will my rats eat and breed tonight? Good riddance however the skeptic in me believes we are not fully finished with this land grab by landlords and the hospitality industry. Something is brewing behind closed doors and it will be more of the same but with more of a Neo-Liberal / Bloombergesque twist. Think Shake Shacks every were.... Your heard it here first.

Get rid of ALL the sheds - and don't allow any new ones, period. They were ALWAYS meant to be temporary.

Get rid of many Citi-bike docks, which are metastasizing like crazy, b/c the docks represent one of the most obnoxious kinds of obstacle imaginable.

If the city were deliberately TRYING to make life hostile to pedestrians, it couldn't be doing a better job.

PS: If the sheds persist or become permanent, I will chalk that up to money that went right into Eric Adams' pocket.

Why is it all over the street, did they detonate it lol

These are not free parking spaces. I pay taxes and car registration.

That small cocktail bar had been using the massive shed for storage for at least 14 months. Not outdoor dining. Glad its gone.

These takedown doesn’t seem to be following any logic, venues that are still open have sheds removed while long gone venues still have sheds up. Get it together city.

So here’s the pros and cons. Shake shack will pay $25 an hour minimum wage. Your mom and pop restaurants aren’t gonna be able to afford that but I’d rather go to a mom and pop restaurant. At those places workers actually have to do work to get their money waiters are some of the most hardest working people the city and they earn every dollar of their money

Can we make It possible to walk by Supper without having to move over to let someone else pass? Ridiculous how selfish some of these places have gotten. Lil Frankies too. Same owners. One of the busiest sidewalk and street parking areas in the neighborhood completely taken over by a restaurant for years. Next to one of the busiest subway stations.

The restaurant shacks need to go.

Unbelievable how the wealthy restaurant industry has gotten free space and turned Manhattan into a shantytown.

In the meantime, the City has done nothing to help small retail facing challenges due to high rent, ecommerce, Target expansion, shoplifting etc. Actually some landlords booting stores to get restaurants which will pay higher rent.
Complete neighborhood destruction.

Many NYC residents and various NYC neighborhood groups concerned about restaurant sheds and City land-use that is not transparent and favours restaurant business over resident daily life.
Concerns should be messaged to the City Council including Speaker Adams. Also see cueupny.com

Why should the city have to bother storing these things if the restaurant doesn't respond after the first FOUR warnings? That's retarded.

Also, if you take ubers regularly and order nonstop crap on amazon don't you DARE talk smack about native New Yorkers maintaining cars. Hypocrites. Who is the real problem here??