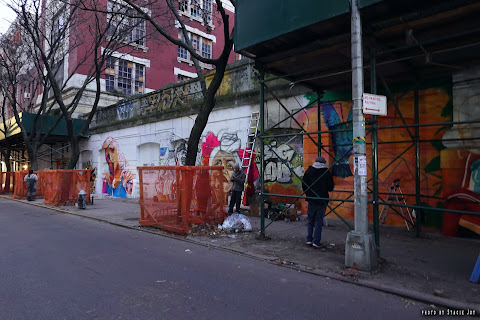 Photos by Stacie Joy
New murals are in progress on the 10th Street side of the former P.S. 64/CHARAS/El Bohio Community Center between Avenue B and Avenue C.
EVG contributor Stacie Joy stopped by yesterday for a work-in-progress look at the murals that aim to beautify the sidewalk and celebrate the legacy of the founders of CHARAS. It's a PIRAGUA art space initiative in partnership with by the Thrive Collective, Loisaida Inc., LES Community Concerns, MoRUS and La Plaza Cultural.
The murals, which include one honoring longtime neighborhood activist Carlos "Chino" Garcia (below), are expected to be completed later this week... 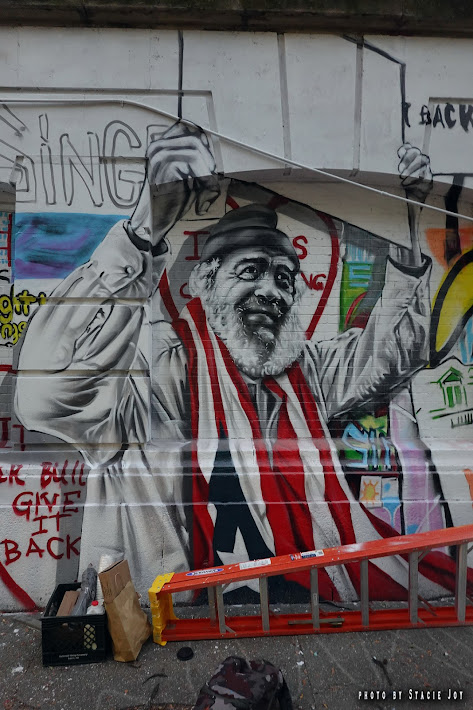 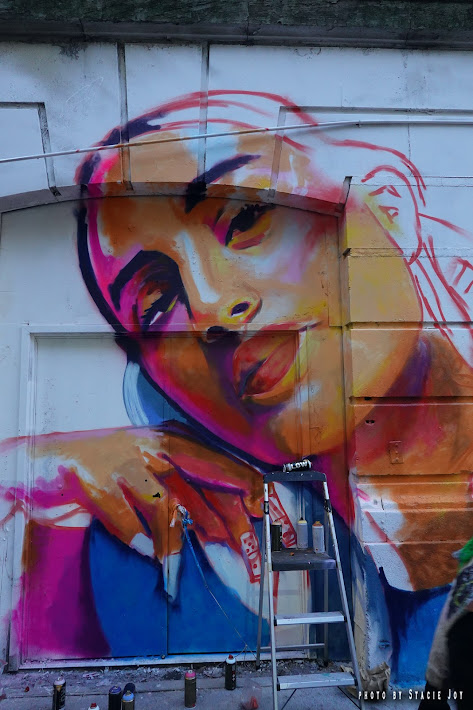 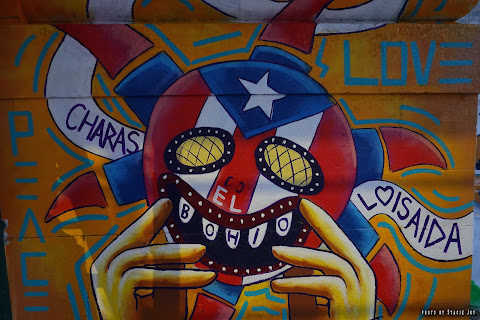 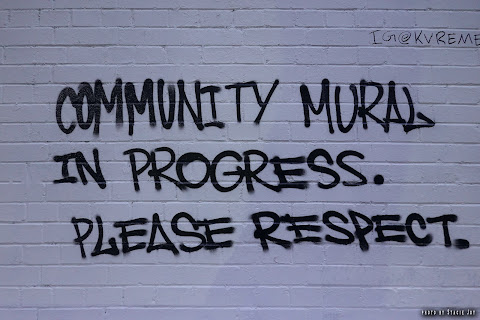 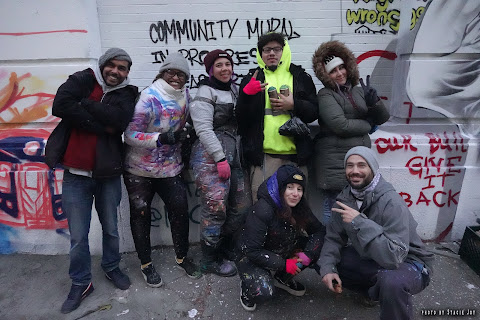 The building, owned by Gregg Singer since 1998, fell into foreclosure earlier this year and is reportedly in the hands of lender Madison Realty Capital.
The five-floor building is being offered for use as medical space or educational-related purposes. Meanwhile, some residents want to see the space used as a community center, as it was during its time as CHARAS/El Bohio Community Center.
This past Monday, a group of activists marched on the Midtown offices of Madison Realty Capital to demand the return of the former P.S. 64 to the community. You can read news coverage of the action at The Village Sun.
Posted by Grieve at 9:00 AM

Did the muralists forget co-founder of Charas Armando Perez ? Please add one to honor him since he deserves recognition too.

Wonderful to see that happening!

Beautiful mural to nourish our hopes to get Charas back to the community. Thank you!!

I love the beautiful comments. I’m also concerned not the ones that are negative. The goal here was to clean up and beautiful this very dismal area and celebrate the legacy of CHARAS. One that supports the arts. I am a product of charas and have been since I was a child. I was Raised by Armando, chino and many others. One of the experiences that may have saved my life. I Agree, There are so many that could be on this wall. However, this was at the discretion of the artist. Background info, photos of many figures with quotes , poems and links were sent to the curators of the wall.artists conducted their own research. The art represented were the expression of each artist who “were not paid” but offered to help bring color to a dark space that represents hope. We all volunteered our time to make it happen. I’m very proud and do believe this art is a message that allows for the world to see we want this space to remain a community space , a cultural music and art space. The way it was when I grew up there I believe if we work together with the right support, it can be achieved. Thanks to all that made this possible.