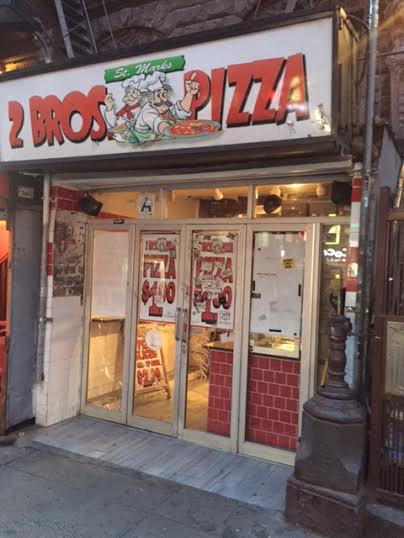 EVG $1 pizzeria correspondent Steven noted today that the 2 Bros. Pizza on St. Mark's Place between Second Avenue and Third Avenue was not open for business.

However, the paper plate on the door points out they will be back open tomorrow... 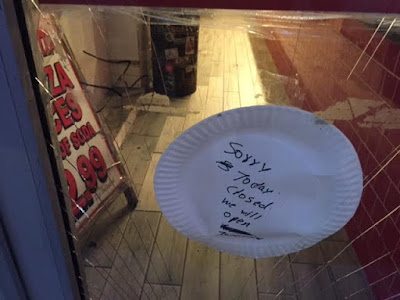 Well, there is some precedent for thinking that this location might be closed for good. The $1.50 2 Bros. a few storefronts away went under back in February... before reopening as Fasta ("Pasta Your Way") then a Belgian fries shop. 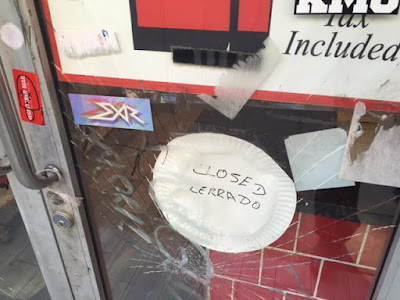 And they are back open, per Steven... 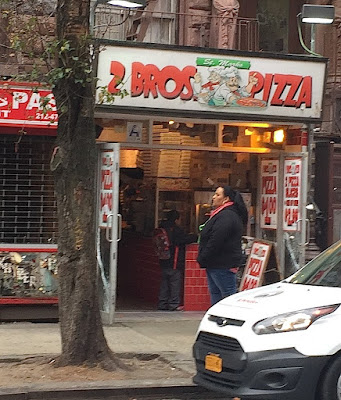 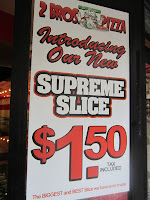 Employees of the 2. Bros. Pizza chainlet have filed a class-action suit, claiming that they worked 60- to 70-hour weeks for less than minimum wage and without overtime.

Per the Daily News, who first reported on the lawsuit:

"They built their dollar pizza empire on the backs of my clients and other workers by grossly underpaying them," said their lawyer, Adam Slater. "It’s just unfair."

Gabriel Bailon, who worked as a piemaker and cashier at the chain’s flagship pizzeria on St. Marks Place and saw 2 Bros. become a citywide staple, said he and other employees were talked into staying with phony promises about raises, but their bosses never came up with the dough.

An attorney representing the owners of 2 Bros., Eli and Oren Halali, as well as their father, Joshua, said they would prevail in court.

"2 Bros. pays its employees in compliance with city, state and federal law and categorically denies the claims made by the plaintiffs," the attorney told the Daily News.

Slater said that the suit represents 12 employees, with more coming forward, and that damages could exceed $10 million.
Posted by Grieve at 12:18 PM 16 comments:

Officially down to 1 2 Bros. on St. Mark's Place 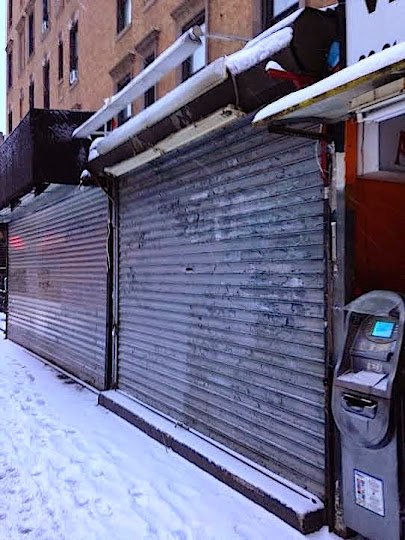 Workers have stripped away the remaining evidence of the $1.50 2 Bros. Pizza at 36 St. Mark's Place.

The low-budget, low-taste pizzeria quietly closed at the end of January. The $1 2 Bros. a few storefronts away at No. 32 between Second Avenue and Third Avenue remains in business.

This marks the second of the three East Village 2 Bros. to close. The location on First Avenue near East 14th Street abruptly shut down last summer.

Meanwhile, this is the third business on the south side of this block to close in recent weeks … joining the Pinkberry and Hanjoo. 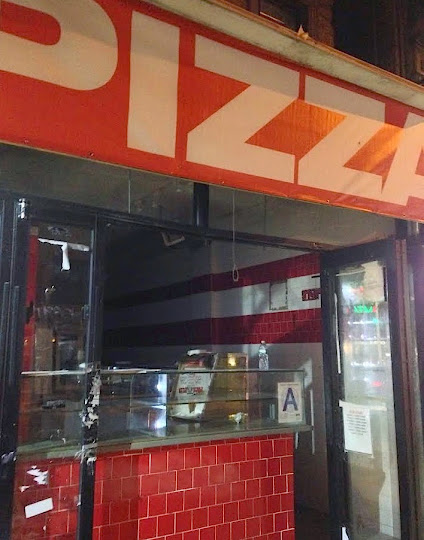 The "pizzeria" has been dark of late during stated business hours. Meanwhile, an EVG tipster reports seeing one of the employees from this shop working at the $1 2 Bros. at 32 St. Mark's Place. The worker said that the $1.50 space was "no more."

If this location at No. 36 is officially closed, then it will mark the second of the three East Village 2 Bros. to close. The location on First Avenue near East 14th Street abruptly shut down last summer.
Posted by Grieve at 4:59 AM 5 comments: 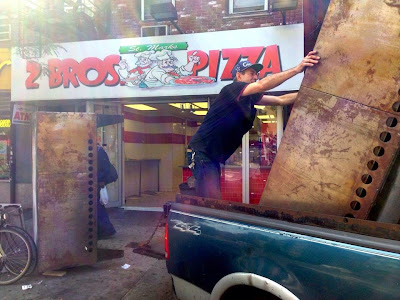 There isn't an official word of a closure just yet.

This 2 Bros. branch opened in February 2013, much to the dismay of next-door neighbor Vinny Vincenz, who has been here for 11 years now. In respond to 2 Bros.'s arrival, Vinny's started offering $1 slices.

For now, it looks as if Vinny's has won this battle…

One reader said that a worker on the scene said they were merely remodeling the space.

[Updated] Something is happening at 2 Bros. Pizza 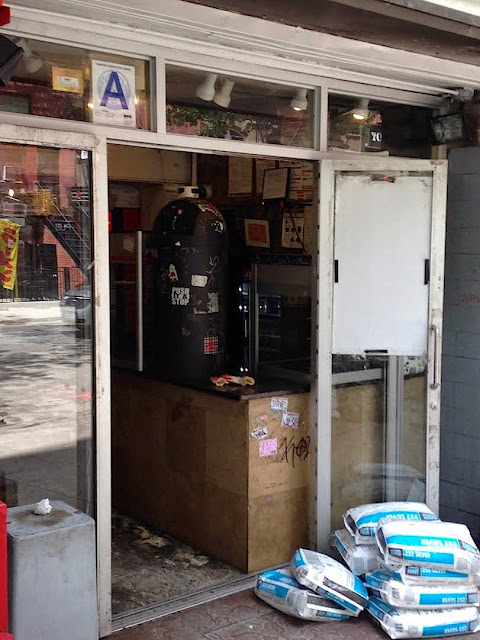 The $1 sliceria at 32 St. Mark's Place is currently closed. Bill the Libertarian Anarchist passes along word that workers are tearing up the floor preparing to close the shop … this according to one of the workers doing the floor tearing up.

However, one worker at No. 36 said the shop at No. 32 will reopen later this week, though he initially tried to avoid the question… 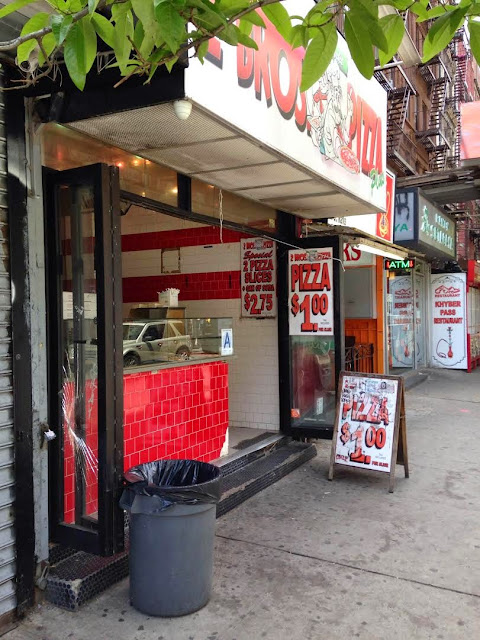 So there you have it, kind of. Closed for good or reopening Thursday! To be continued… 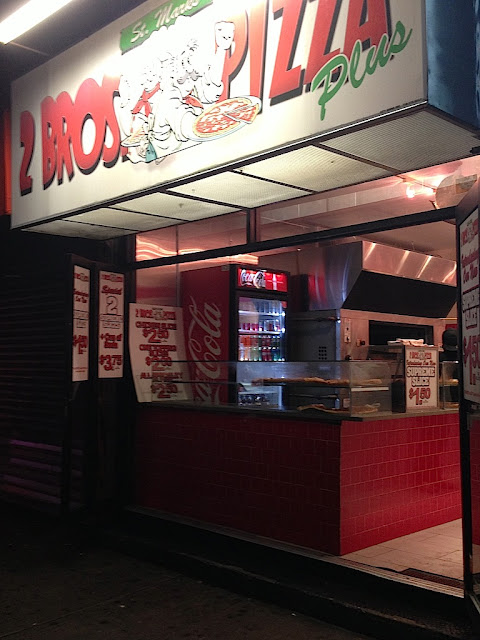 One of the 2 Bros. on St. Mark's Place that closed after a nearby fire in September is back open... this is the one that sells the $1.50 "supreme" slice...

And down on St. Mark's Place, weirdness continues at Nino's 2.0 at Avenue A. Reopened. Closed. Reopened. Now closed again... 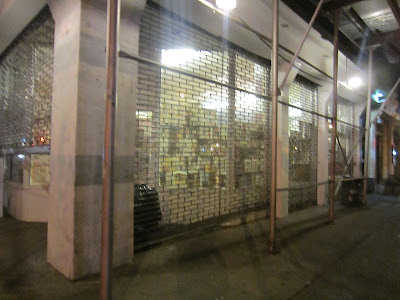 Posted by Grieve at 4:59 PM No comments:

Looking at the 2 Bros. fire damage

Things were pretty quiet on St. Mark's Place this morning (save for the group of crusties camped out adjacent to the 7-Eleven) ... Not much sign of damage from last night's fire in the apartment above Little Tokyo and 2 Bros. Pizza. 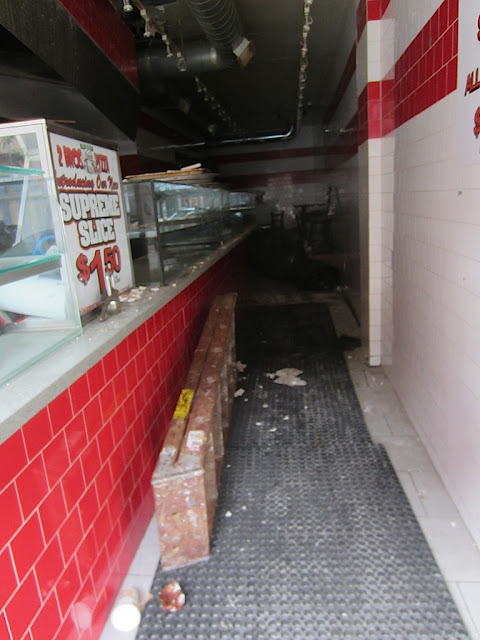 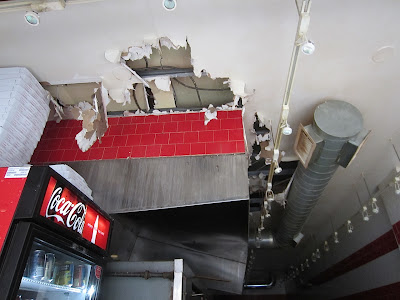 Workers at the scene wouldn't answer any questions, such as what the extent of the damage was or when they might be able to reopen.

Per an EVG and witness to the fire: "The place next door to 2 Bros, Little Tokyo, is devastated; a wall was torn out and everything up against it smashed or thrown onto the sidewalk. Those poor guys are going to have a hell of a cleanup..." 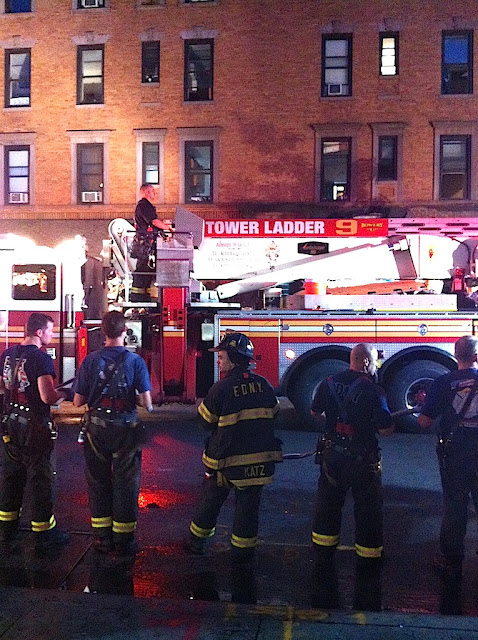 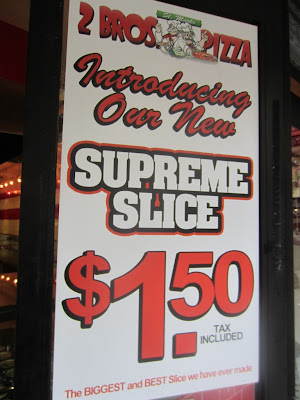 Oh, and in other 2 Bros. news, they are opening a location in the Bronx this October, according to their Facebook page ...
Posted by Grieve at 6:20 AM 9 comments: