During the May 11 CB3 SLA Licensing Committee meeting, Aces & Eights, the frathole on Avenue A in the former Mo Pitkin's space, heard it from residents and CB3 members. As Eater reported:

A number of EVill oldtimers stood up to complain about noise, while the CB members questioned the lack of food in the restaurant, the 13 TVs (they were allowed to have only two), and the advertisements for drinking games. In his defense the owner said food was on the way — though we think it's safe to assume he means wings, nachos, and bar snacks — and that beer pong should not be equated with binge drinking, "It's one pitcher divided into 16 cups!" The peanut gallery had a good laugh, and the committee decided to write a letter to the SLA.

Anyway, that food has arrived. Per the menu now on the front window: 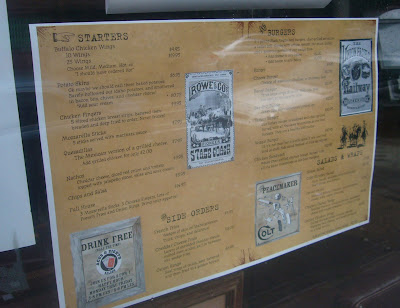 --Material, usually of plant or animal origin, that contains or consists of essential body nutrients, such as carbohydrates, fats, proteins, vitamins, or minerals, and is ingested and assimilated by an organism to produce energy, stimulate growth, and maintain life

and this is why we're fat

Awesome menu! They serve both types of food: burgers and wings!

It's probably a good time to leave comments about the lovely food and ambiance on any site that reviews this fine establishment.

I don't blame the, um, business people who open this kind of place as much as I blame NYU and I don't think the buck stops at NYU. Hello? Community board? Say NFW once in a while and when buildings that were supposed to be hotels semi-respectable condos, surprise, surprise, turn into dorms, then close them down. Please.

I find the entries and comments on this site to be one-sided and offensive. As an Aces & Eights employee I have a few things to clarify:

-Serving food has ALWAYS been a part of our business plan. Due to certain delays we were unable to for quite some time. As the entry above discloses, we are now. The issue should be moot.

-The average age of our clientele is between 25-30 – older than the "frathole" demographic. Also older than the NYU crowd your commentator blames. Frankly, it makes you look prejudiced, judgmental and rude to speak that way about our establishment and our clientele.

- The stipulation in our license regards having no more than two TVs over the bar. The 12 TVs you're referring to are NOT over the bar. There is actually only one TV over the bar. I am not quite sure why televisions offend CB3 so much. According to Nielsen the average American watches 151 hours of television a month. It’s a preposterous figure but I really don’t think watching a baseball game in a bar is that big of a deal.

-Regarding beer pong, it is actually one pitcher (60ounces, three pints) divided into 20 cups played by two teams of two. The average game takes approximately 20 minutes. That means four people split three pints over 20 minutes. In my experience in this industry people drink more, faster when they’re not playing.

-As far as noise is concerned, there is not one subwoofer on the premises and there has never been one. We currently function at a fairly low decibel output. In the East Village street traffic is the nature of the beast. The other evening a man in a spray-painted jalopy drove up and down Avenue A blasting CSNY's "Teach Your Children Well" on a PA system mounted on the roof of his car. I've seen gangs of motorcycles roaring up 1st Avenue. Troops of partygoers and bar patrons have been streaming up and down the streets for years. Our bar is not the predominant noise polluter in the neighborhood nor is it even a significant factor.


I know blogs don't have the same journalistic requirements that standard news media insist upon, but no one has ever come to us to talk or ask questions. No one wants our side of the story. If you'd like to do so now, perhaps to clarify some things, perhaps to see that we run a clean, friendly and accommodating operation. I would be happy to oblige.

beer pong? you automatically lose all credibility. get a real job. General manager of a douche bar parading as a restaurant? You'll be around for 9 months after you've sucked another neighborhood dry.

Anonymous#2, I do not want to get into a vitriolic screaming match with you online. I merely want to ask, how does a bar "suck the neighborhood dry?"

Well said Tom... the acerbic words of an anonymous man are hardly the words I would take to heart. In anonymity lies the bravery of a man who shoots someone in the back.