The Horus Cafe on Avenue B at Sixth Street... 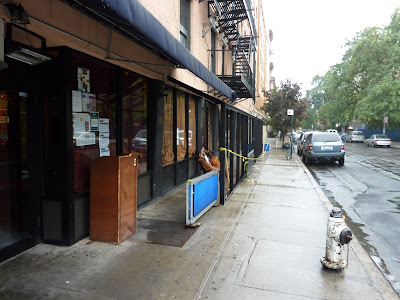 is adding on a sidewalk cafe, according to work permits. Looks as if it will be enclosed. Still. 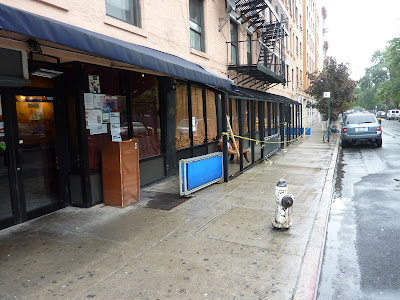 Meanhwile in Hell's Kitchen!
Shelia McClear has the story of the new Horus Too (the same owners as the three East Village Horus locations) on West 46th Street. It's a dandy, featuring angry neighbors, community board baiting-and-switching...

While a business owner is not legally obligated to follow the instructions of a community board, Moyer said that the owners willfully misrepresented their intentions. According to Moyer, when someone asked the owner at a meeting, “No hookahs, right?” he replied, “No, no, just good Mediterranean food.”

The restaurant is open until 4 a.m., despite the owners originally telling the board they would close at midnight.

This place is so gross--both the food and the hookah pipes, which are just as bad for you as smoking cigarettes.

i live in the tenament building just down 6th from this place, so i get to walk by the b&t velvet-rope crowd daily, and can barely get by them all sprawled out, texting, celphone chatting, smoking, flicking cigarette butts everywhere and generally being gross. i usually just walk in the street. NOW with this "cafe" taking up half the sidewalk, plus the velvet rope line, what does that leave??? can't wait.

Yes, this is disgusting. Middle-Eastern misogyny at its worst, displayed for all to see.