Reminder: Drinking for a good cause today 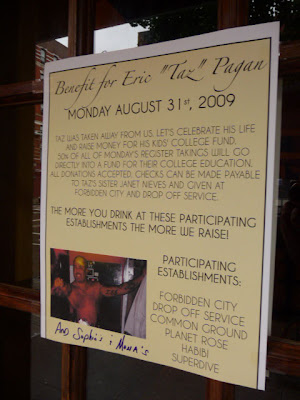 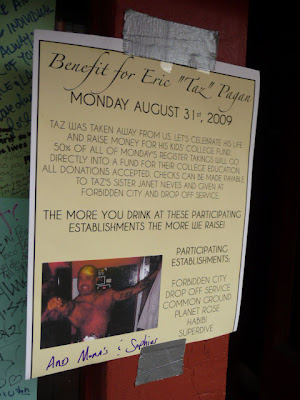 Sophie's and Mona's are also taking part today. And I believe Destination... A commenter on Friday's post asked why Destination wasn't included (given the bar's proximity to Forbidden City and friendship with Eric "Taz" Pagan")...to which Destination's Mason Reese later responded, "Truthfully, no one called or mentioned this to me at all, since hearing about this, I've reached out and made the offer."

UPDATE: Destination is taking part. Confirmation in the comments.

Previously on EV Grieve:
EV bars come together to create college fund for Eric "Taz" Pagan's children
Posted by Grieve at 7:30 AM

Just writing to confirm that yes, Destination is participating tonight.

Also, our Saturday night bartender, Josh, is hosting a benefit concert on September 17th (we'll have more info to come)

Thanks, Dan. Please pass along information on the benefit when it's ready.