Imagining Avenue A and Second Street with a 7-Eleven 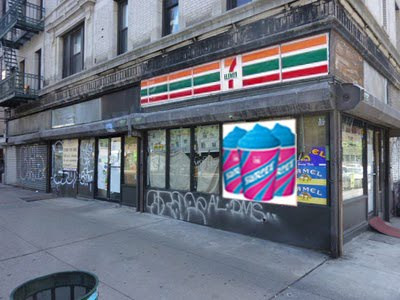 OK, this is half-assed Photoshopping at its finest... still... just trying to wrap my head around this... picking up on the vigorous debate from yesterday (thank you to everyone for the spirited comments)... As you know, EV Italian eatery guru Frank Prisinzano said on Monday night that the landlord of the former Graceland space on Avenue A and Second Street had four prospective tenants: Frank's fast-food Italian joint, a bank, a 7-Eleven and a bank.

Of course it's very possible this was just a scare tactic... still, given 7-Eleven's recent emergence in Manahattan, it's probable. (As The Real Deal reported, the chain is planning on opening 100-150 new locations in the five boroughs inthe coming few years.)

Regardless, Prisinzano's dream of another outpost isn't dead despite the CB3/SLA committee's deadlock Monday night -- the full CB3 will hear this whole thing again next week.

There are no easy answers here... Jill puts it into some perspective in the comments about life with another Frank here:

The issue with that space is that it is huge, not that anybody thinks it will become a bar. He also put in for a sidewalk cafe ... I believe the total occupancy quoted was 190. That's a hell of a lot of people to bring to that corner all at the same time, with loads of turnover ("5-10 minute wait for fast food.") Do the math -- potentially 1,000 people coming in there every night if it's truly an in and out kind of place that is successful. Crikeys.

Indeed. I imagine the new suitor for this prime space will remain a hot topic this summer... is there any compromise?
Posted by Grieve at 7:00 AM

Email ThisBlogThis!Share to TwitterShare to FacebookShare to Pinterest
Labels: 7-Eleven, Avenue A, the apocalypse

Ok. Enough of Frankie's. Most of them have become obnoxious sidewalk blockers and party hang outs. The food? Feh.
I'd love to see a nice corporate 7-11. 24/7 Slushies and microwave crap.
Awesome.
But in StetzerLand who knows. This is her neighborhood and we just rent here.

1,000 people coming in for a Prisinzano restaurant (assumes 4 full turns a night- that's very generous) vs. how many for a 7/11 vs. dead space for a bank. Only presenting one side of the argument is bad form.

and also- the sidewalk issues at the other places seem largely due to their low seating capacity and small frontage. Neither of which applies to this space.

Honestly- I like the Frank restaurants- I think they're (mostly) affordable, the food is very good, and the atmosphere is comfortably laid back. Not the best Italian in the neighborhood, but upper tier. I'd be glad if he took over this space, though the saturation of 4 Franks in a couple blocks is a little nuts.

Question for some of you- if not Frank, which other local restauranteur would you like to see in this space? Pulino? Phebes? Let's think of the best use for this space, weighing all options, rather than refexively say no to each proposal.

Using Jill's math strategy a 7-11 with an average transaction time of 30 seconds would get 2,880 customers per day. I'll stick with Frank's fast food instead of worrying about which drunk is going to throw a Slurpee at my head.

in my little fantasy land, i'd like another book store to complement mast.... someplace with a bigger dvd rental selection than the 2 boots nook. i know, crazy! sad that such wishes have become fantasies here.

Bring back the big Kim's!

what is the issue with 7/11 anyway. Does it bring back horrible memories of your childhoods in Rochester? Everyone in this neighborhood grew up somewhere else and tries endlessly to forget that fact. Seriously, get over it.

Hard time imagining a 7-11--the smurf makes it a wee bit easier.

Maybe Subway will make its first entry North of Houston and East of 1st Avenue:

Or, maybe the landlord will be unable to secure the rent he's after and have to subdivide. Then we can have a bank and 7-11 to boot.

Sure, a good movie rental place or bookstore would be great. I miss the old expanded DVD rental section of Two Boots. However, I'm surprised how much opposition there is to a cafe/restaurant, given that these other options don't seem to be on the table.

If the food is priced cheap, it gets accused of being a honeypot for drunks. If it were expensive, it would be accused of contributing to the yuppie-fication of the neighbourhood. Is there any way a business owner could win in this situation, or are people just looking for a way to vent their anger at the weekend crowds?

Anon - The problem w/ 7/11 is not Rochesterphobia - it is like: Radio to ClearChannel or Staples to the Ave A Stationary store, or Potatoes to Pringles. If one wants all safe, all same everywhere, walking w/ our blankies and twittering every thought to others-as-extention-to-self then the difference is not important. Alas, i am old enough to not only remember real radio but to to know the difference and find the ClearPringle7/11Channel sorely wanting.

I would like to see Schneiders come back to Avenue A.