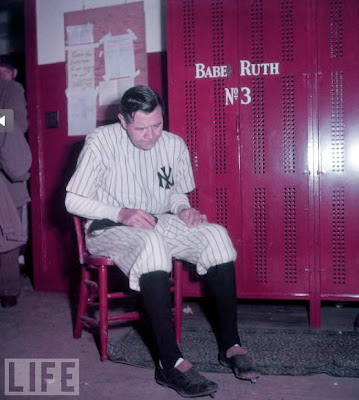 Came across some previously unpublished photos of Babe Ruth on LIFE.com. Per the website:

Babe Ruth, the most famous and, arguably, the most beloved player to ever wear a baseball uniform, died of cancer on August 16, 1948 -- two months after his final public appearance at Yankee Stadium. On that gray June day when, gravely ill, he last put on the pinstripes (above), 60,000 people filled "The House That Ruth Built" — to watch as his famous No. 3 was retired, and pay tribute to a man who had given so many fans so many thrills for so many years. LIFE magazine's Ralph Morse was there, chronicling Ruth's final moments in the public eye; now, in this gallery, LIFE.com presents rare and unpublished photos from that day. Morse — 93 years old, and as sharp as ever — recently spoke with LIFE and recalled what it was like to photograph one of the 20th century's greatest athletes as the Babe said his final, poignant goodbye. Pictured: Babe Ruth, 53 years old, in front of his locker at Yankee Stadium, June 13, 1948.

Speaking of The House That Ruth Built.... Have you seen it lately? It's a giant pit. 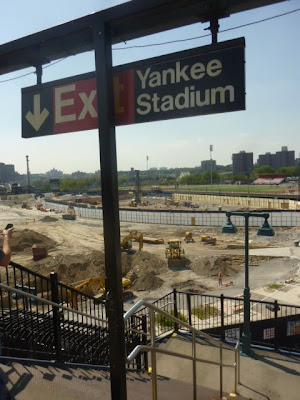