Tompkins Square Park is way past due for a new bandshell

There are two high-profile events this weekend in Tompkins Square Park... a free punk show tomorrow headlined by Star Fucking Hipsters .... and the Charlie Parker Festival on Sunday... So, in preparation for these gigs, people will have to build up and tear down a stage....just like they have to do every time there's an event like this in the Park. 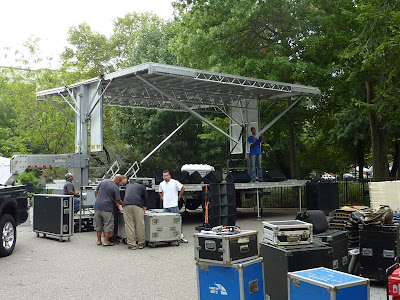 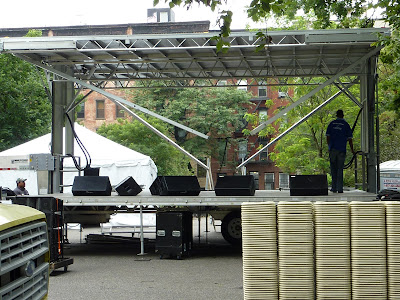 So, I know this has long been a point of discussion, but it seems like a good time to bring up the subject again.

For starters....last year, the city completed a $1.5 million upgrade on the main playground in Tompkins Square Park that took 11 months to complete. 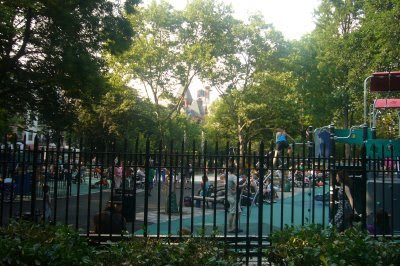 Before that, the city unveiled the new dog run, which underwent a $350,000 renovation ($30,000 of which was funded privately by the dog run group). 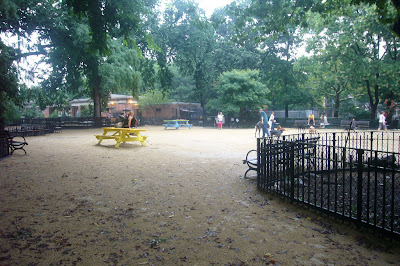 This is all well and good...However, that's about $1.8 million for these things... Though, personally, I don't have kids or a dog... So, why doesn't the city now fork over some money to rebuild the Tompkins Square Park bandshell? That the city destroyed in 1991, of course. I won't get into the whole history. You can read about it here. Chris Flash (and others) at The Shadow has been a tireless advocate on this subject.

As The Villager noted in February 2006, a quick paragraph of history:

[T]he band shell’s days were numbered. By the late 1980s, it had become a homeless shelter, with 40 to 50 people sleeping in it, as well as Alphabet City’s largest urinal. In addition to the homeless, it was increasingly used by neighborhood activists and squatters as a rallying point. Following a major riot in 1988 over imposing a curfew on the park and another big one in 1991 that started at the band shell — which some accuse police of instigating — a few months after the last riot, the park was closed for a year for a renovation. One of the first things done was to demolish the bandshell. 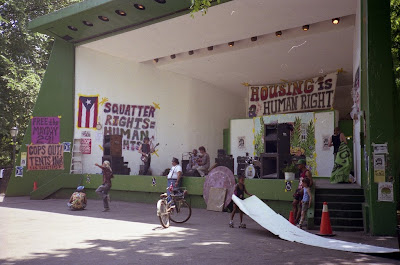 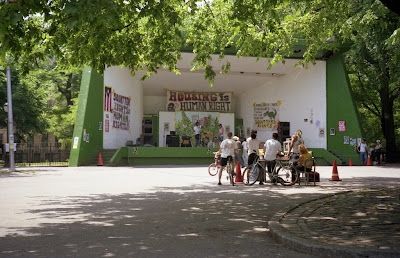 And, this is subject to some speculation, the Grateful Dead's first-ever New York City gig was in Tompkins Square Park on June 1, 1967. 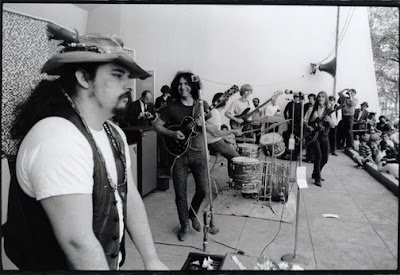 In any event, bandshell or not, people still sleep in the park... Is that so surprising? A bandshell is beneficial to nearly everyone in the community... for concerts, theater... community groups, religious organizations, etc.

Is the NYPD really worried about patrolling this? I recently saw six police cars swoop in on one fellow with an open container. About 10 police officers stood there for 20 minutes while one officer wrote the man a ticket. It's about time the city give the people here something else that they want and need.
Posted by Grieve at 7:00 AM

I love the old photos of the park and concerts and bandshell.

Right On E.V. Right On !!! I was arrested. Driven around the neighborhood in the back of a speeding cop van for an hour. The only time I was actually happy to get taken to the 9th Pct. and then I was in Central Booking for 2 days. This happened when they knocked the old bandshell down. I was charged with obstructing a sidewalk. Past time to build a new high tech solar powered one with a built in soundsystem. TSP Everywhere !!!!!

What's Erin Brockovich up to these days.

would be nice to have a bandshell, but here's to another 20 years without.

it would be nice to think that our neighborhood could be mature enough to enjoy the benefits of a bandshell instead of having a few die-hards turn it into a poitical hostage situation.
it has been great that everybody can now use TSP.

First of all I would like to repeat to all those Charlie Parker loving right wing bank and real estate developer lovers CHARLIE PARKER WAS A HEROIN ADDICT like many of the over 300 people who were living in TSP before they tore the bandshell down. The bandshell was built to alleviate a political situation ie. conflict between Puerto Ricians and Hippies. When they closed the park after evicting tent city enough people showed up to surround the park holding hands. Not everyone can use the park now many people that I know personally have been forced to leave the hood to make way for the new gentrify because of real estate speculation gone wild.Read up on TSP history and you will find it has a long history of Radical Political activities and hopefully it will again someday.

john penley - none of what you say has anything to do with a band shell - nor did the band shell or the homeless living in the park keep the rents affordable.
we do not celebrate parker's addiction, only his music, as with monk and the long list of addicted artists. and parker lived on avenue b.
consideration for others along with working together would strengthen existing rent laws (as few and weak as thy are) rather than constant confrontation.