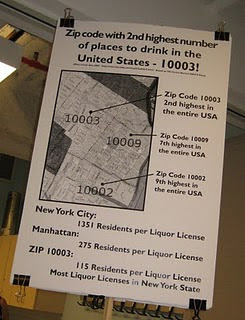 I was unable to attend last night's special meeting about CB3's liquor-license future. The goal/point:

We will review and evaluate changes to Community Board 3's existing policies and procedures guiding the Board's approvals/denials of all types of liquor licenses for establishments within the CB 3 district. All previous "resolution areas" will be reviewed.

But! Several readers were ... here's one East Village resident assessment:

I didn't find it very productive. A lot of the usuals were there ready to air their grievances about the decline of retail and oversaturation of licenses. [CB3 Chair Dominic] Pisciotta said he was looking for more input on policy, such as seeking a concrete definition of "public benefit" when considering the 500' rule. Something that subjective? Good luck.

[Board member Dave] McWater put up a few good ideas about streamlining the process of the monthly meeting, such as adopting standardized stipulations. Apparently CB4 does this. Special guest Paul Seres, a LES resident who co-chairs the CB4's liquor board was met with scattered boos when he announced he was also the president of the NY Nightlife Association. I think he had some good ideas though, and it was a shame to show him disrespect when he was just offering ideas to help.

[CB3 Manager Susan] Stetzer seemed slightly happier than usual, though was quick to mention on several occasions that the office was already overworked and few of the residents' ideas from last night would be implemented, at least with any immediacy.

In the end, there was the usual "call 311 to report problems" followed by "the police won't come when you call 311" routine. It's clear that real change comes at a higher legislative level. With one board member saying we should be voting for politicians who are sensitive to the bar issues, I wonder if anyone there really felt they possess the power to make a difference.

Jill was there too. Where I borrowed the image. BoweryBoogie has coverage here.
Posted by Grieve at 11:00 AM