The CB3/SLA committee meeting last night got off to an ugly start thanks to an often contentious 45-plus minute discussion about a renewal for La Vie, the hookah-flavored club at 64 E. First St. between First Avenue and Second Avenue.

First, a little about the address... which has seemingly been home to a succession of clubs in recent years... 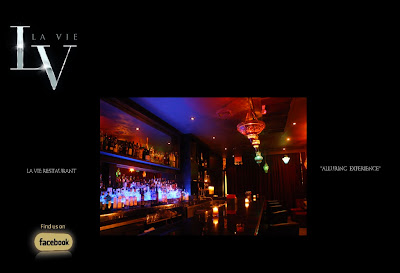 There is no mistake that this venue, designed to take a regular evening and turn it into a spectacular one, is called La Vie. Upon entering, life as you know it stops and your definition of New York nightlife changes, as French-Moroccan cuisine, cocktails, and décor fuse to attract a multitude. Come for happy hour, dance all night long, or come when our doors open and stay until the doors close, La Vie is on every night.

Several First Street residents were in attendance to address the ongoing issues with La Vie (and its predecessors), and the fact that they have been operating as a club under the guise of a restaurant.

According to residents, the dance music emanating from the two-level club is loud and disruptive to their quality of life ... and there's often chaos in the streets as clubgoers come and go, etc. ... Meanwhile, residents say management has been unresponsive to the issues. A manager told a resident that the club couldn't turn down the music, saying "they need to keep a good vibe for dancing."

Another resident stood up and gave one of the most heartfelt and straightforward pleas before the Community Board that I have ever heard. He estimated that he has put hundreds of hours into trying to get La Vie to be a better neighbor, even spending $3,500 on an independent sound study. He talked about the anxiety that he and his girlfriend were experiencing... being perpetually exhausted on just a few hours of sleep most nights... the dread of anticipating the nonstop thump-thump-thump of the music. "We refuse to retreat to another borough or community," he said.

The two owners were on hand... they took over La Vie this past fall... the two seemed sympathetic to the situation. One owner says they have spent $100,000 the last 45 days installing sound-proofing and getting sound testing done. The owners even offered to soundproof the apartments of any residents experiencing noise problems. "We understand there is more work to do," one owner said.

Later it came out that the previous club here also soundproofed the space, prompting people to wonder how much soundproofing was needed for one place ... Committee member Ariel Palitz, who owns Sutra around the bend on First Avenue, lectured the owners — and offered an inexpensive solution. Why not just turn down the music?

CB3 District Manager Susan Stetzer mentioned that Horus on B had run afoul of the State Liquor Authority (SLA) for an illegal sidewalk cafe. There was more discussion, and the committee voted against renewing La Vie's license... sending the matter on to the SLA, where the owners already have a hearing scheduled on Feb. 2 related to several prior violations, including an illegal trade name and unauthorized alterations (La Vie put in a retractable roof).

After the dismissal, a glowering Elsayed approached the committee table and made several angry comments. Turning to walk away, he inexplicably called Stetzer a racist. This prompted an exchange.

"Your mind was made up before we got here," Elsayed semi-shouted while leaving the room.

A little later, one committee member said in jest in front of the room, "If douchebags are a race, then I'm a racist."

[Updated] Superdive a CB3/SLA no-show tonight
Posted by Grieve at 7:00 AM

I believe that same resident made this complaint to the owners of La Vie at September's 9th Precinct Community Council Meeting.

Maybe they should invest in the type of sound proofing that NASA labs use:

It'd add a cool feel to the place.

Hey, if douchebag is a race, we're ALL racist!

Elsayed is an idiot. None of the neighbors care what race the owner of this place or the previous establishments were. They just want to be able to sleep through the night. Is it so hard to get proper soundproofing and just turn the music down? This guy has no respect for the community.

I've asked around through the years if anyone has been to either of the Horus locations... people who live in the neighborhood that is. Still haven't found anyone who has.

So if you're catering to a crowd who doesn't live around here... you're less likely to care about being a good neighbor. As long as the crowds keep arriving from Long Islands and Jersey Shores.

I went to Horus on the corner of 10th and A when it first opened and never went back just because the food was pretty lousy and I am not into that hookah crap. It's so bad for your lungs.

Maybe they should test the sound levels with a community resident present. What might be considered loud to one person, might not be for another. I'm not a racist but ethnic people luv loud music and this is coming from a latin dj ;-D

Hey Grieve, yah I've been to the Horus on my block (Ave A/E 10th) as it's just a few feet from my apt. I've gone early (really early) before the crowds because in the summer it's just a damn good corner to catch a little of TSP park activity, like kids playing baseball, soaking up E 10th, (a lovely block) and Ave A (but of course).

As for Horus itself, you are 100% correct, it's not for/nor attracts locals.

P.S. Eater and Gothamist butchered the Stetzer/La Vie-Horus exchange and claimed SHE made the "douchebag" comment. She, of course, did not. Stetzer, as you know, is all business at CB3 meetings. :-)

No, it was a different resident who spoke at the 9/9 precinct meeting.

I'm a local resident and my 'local' friends and I have been to both Horus Cafe and La Vie many times. We like it.

If you are going to make this claim, then tell it like it is, that most of the bars and restaurants in the Lower East Side don't cater to the locals. Why single out La Vie?

La Vie singled themselves out by violating their Liquor License parameters, ignoring DOB and CB3 stipulations AND violating NYC Noise Code multiple times. This is not a discussion about who goes where and who likes what. I don't give a crap if locals go there or not. However, I do care and so should you, that all EV establishments act with respect for their neighbors-which the owners of La Vie clearly have not done.