The market on the corner of Seventh Street and Avenue C has been going under some transformations in recent months... a new name and awning appeared in the fall... 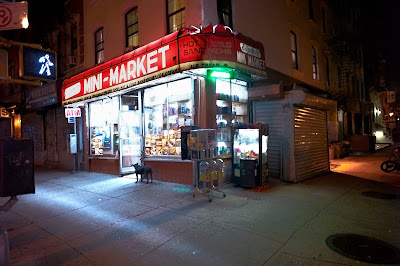 And now, the market — dubbed the "Cobra" store for having the best prices on King Cobra Malt Liquor — has closed...

It will soon be home to a Wholesome Foods, a gourmet deli ... 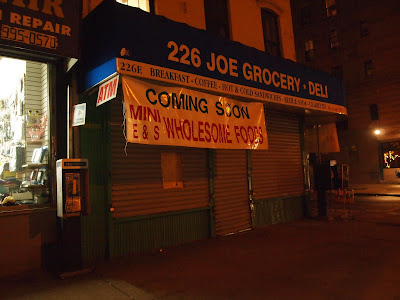 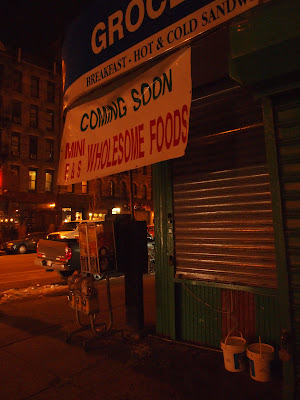 There's another Wholesome Foods on Stanton and Essex. Back in the early summer of 2008, The Villager profiled the Wholesome owners:

When Orlando Rodriguez, 34, was growing up on Suffolk St. on the Lower East Side, the neighborhood was a stark contrast to today’s scene of luxury high-rise apartment buildings and upscale hotels that are fast filling the landscape. Drugs and crime proliferated on the streets.

“All my school friends ended up in jail or dead,” said Rodriguez, whose older brother was murdered in 1987.

While Rodriguez is saddened about the effect of increasing prices and rents driving out many of the people and businesses he grew up with, he feels that the changes on the Lower East Side are a positive thing.

sorry, but i'm not a fan of Wholesome Foods. typical fare and overpriced.

Nice people, nice deli. And slightly *less* expensive than others in the vicinity, at least in my experience.

agree with baha. better than the run-of-the-mill bodega.

it is nice to know that a real local is opening up a nice local business. Small business owners FTW!

What the hell? Where am I going to buy my PBR from now. This is a disgrace! *Turns & heads to Associated*

Ok so it's a deli. If they want to be on avenue C then they will have to support the community and our effort towards getting rid of the trendy bars, lounges and restaurants that shouldn't be there to begin with.

We need to drive them out and replace them with things that the community needs. I'm happy about the dance school. Lets come together and fight to improve avenue C.

LOL --What a headline.

it's a great improvement.