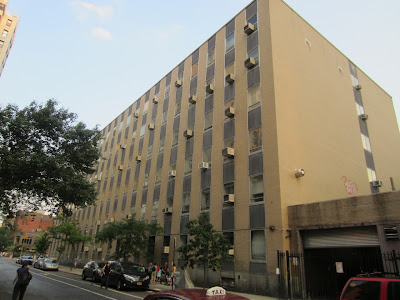 By now, you likely know what's coming very soon to Astor Place — a Fumihiko Maki-designed 430,000-square-foot tower at the site of the former Cooper Union engineering building (You can refresh your memory here.) 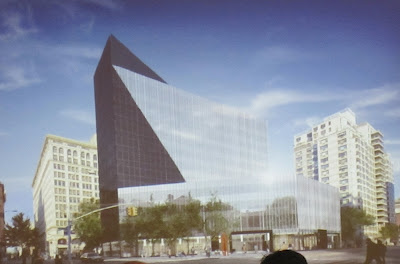 Last night, representatives from the developer, Edward Minskoff, and the construction company, Sciame, shared demolition plans with 50-some community members at the soon-to-be demolished 51 Astor Place.

There were several presentations... the thing will be "black glass with black granite and silver fins." A construction rep talked about how safe the site will be... as well as signage, drainage, curb cuts, Zzzzzzz....

Now to what you want to know about:

Demolition begins on July 1. The reps said the entire duration of the project is 17 months.

Actually, you won't see any wrecking balls lined up starting on July 1. First. There will be roughly 40 days of abatement, to rid the place of fun things like vermin and asbestos. The construction rep assured the audience that all this will be done to the letter of the law with the utmost safety features in place. He described it as a "controlled process."

After that! A round of inspections. Then workers will commence with a 50-day-long "surgical demolition." So the actual demolition portion should commence sometime in mid-August. Workers will encase the site, and use small machines to methodically remove floor by floor... The demolition truck staging will take place on Third Avenue at Astor...

Early on, a discussion on the hours of the demolition site nearly turned the meeting into a melee. The construction hours are the city-established 7 a.m. to 3:30 p.m. There will be an occasional need to work on weekends, and the crew will have special DOB-issued permits for that.

"A lot of people live around here, and we're not going to be able to sleep for two years," said one resident in the back of the auditorium.

Reps tried to soldier on with the presentation, but a few persistent residents weren't having it.

"We don't care about the project."

Another resident mentioned a lawsuit to stop the project.

The presentation continued. Two of the more-vocal attendees eventually wandered out early.

A few other factoids:

• The plaza area roughly where the Film Academy Cafe is now calls for an Alexander Calder sculpture, most likely one titled "Giant Critter." (CB3 will review the plaza plans in July. More on that meeting when the date is available.)

• The building will include space for retail and educational use on the lower levels; office space on the upper floors.

• There are no retail tenants yet. The retail space will reflect the needs of the office tenants.

• The developers have had talks with NYU and Cooper Union about leasing the educational space.

And here's what the building looks like from the Fourth Avenue side... (Note that the Cube remains on Astor Place...) 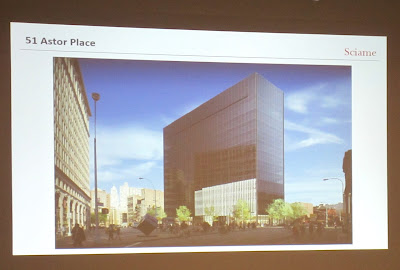 More on all this later...

Bonus! Photo of the first-floor men's room at 51 Astor Place... 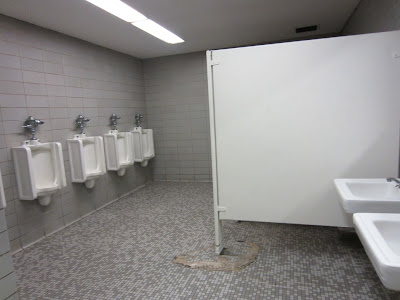 Previously on EV Grieve:
East Village — the new Midtown?
Posted by Grieve at 7:00 AM

We'll say the President took a street-meat induced crap there and that it's historical...or something.

Just to be dicks.

The thing about brick buildings, even dowdy ones like the current 51 Astor Place, is that they're kind of inviting, kind of warm and organic. The new building is extremely elegant. Also, cold and imposing and probably will be impossible for humans to warm up to, at least for the next hundred years or so. Not to mention the out of place factor. Like wearing a tux to a barbecue.

god
another one of those architectural student failures - or is it a contest to create the most inappropriate building to ruin a now pleasant street?
the one up-man-ship in architecture is ruining our neighborhood as much as the rising rents.
and while dowdy 51 astor place has a history and reflects a period of architecture, while ugly is still historic and should be preserved.
the no longer "local" for the city free college, cooper union cries poverty yet owns massive amounts of real-estate - can pay for this, what they consider top-notch construction, on city-owned land that they pay no taxes on - and they are not even going to use it for upgraded cooper union classrooms! and they want to rent this ugly space to other schools?
doesn't the local community have anything to say about this tax funded monstrosity?

Black glass??? Why not just create a si-fi black hole and be done with it. The color and granite alone will suck the life out of Astor Pl. But the design is just as bad -- a big ugly box on one side.

They're totally trashing an excellent opportunity to build something wonderful. Right next to the glorious Cooper U's landmark building and beside the original Wanamaker Department Store, they could have designed something contexually cool that would have lifted up, and been lifted up by, the surrounding architecture. But no. This is City planning and amatuer urban design at its worst.

This will be the ugliest building since nyu dropped Bobst Library on Washington Square Park; and the developers will be living with the legacy of this crime just like nyu.

I can't believe they invented something uglier than what's there now. I would have thought it impossible, short of building a twin for the Astor Place Tower -- but they rose to that challenge.

And if they're projecting a completion time of seventeen months, which is outrageous enough...I expect that in July 2013 we'll all still be wondering when they're going to be done.

It looks like a bad 80s shark fin that might adorn a bad 80s hot dog drive-in. Please tell me there's still a chance the design could change.

cooper union owns the land that the astor place tower chase bank building sits on.
the original design resembled metal patchwork pajama bottom.
the community board was somewhat involved, lots of folks protested, and somehow the design was changed.
while not much better, it is, at the very best, bearable.
does anybody remember how that design was defeated?
these new glass architectural nightmare "distructures" completely destroy the tone of the neighborhood.
for a school that has an architecture school it is a disgrace.

Unfortunately, we're stuck with this. The OK for the design and everything all happened in 2002 with the City, DOB, CB3, etc.

There will be a public meeting next month to discuss the public plaza roughly where the cafe is now... I think there's some opportunity for feedback on that space.

Goggla, That is exactly what I thought too!

What is wrong with all of these architects? Seriously, how do you look around at the gorgeous architecture on Broadway and other parts of Cooper Square and come up with something like this?

Why is UGLY and UGLIER the standards in designing new construction?

Architects of the past were influenced by classic Roman and Greek structures (see the original Penn Station, grand Central Station, the 42nd Street public library for examples).

Today's architects seem to be influenced by twisted visions brought on by excessive consumption of psychoactive substances, and I'm not talking about the good stuff!!

A city is always more than its architecture, but to destroy the past that is expressed by enduring architecture is an assault on history itself. Growing up here, you learned one bitter lesson: Whenever something was destroyed for the crime of being old, what replaced it was infinitely worse.

Horrid. One the ugliest and most dehumanizing building designs I have ever had the displeasure to witness.

Cooper Union has an architectural school. Yet this is the best they can come up with? So many beautiful buildings nearby, like the Wanamaker and original Cooper Union building, and the "starchitects" insist on insulting the neighborhood with monstrosities like the Cooper terrorist-plane-crash building on 7th Street, and how this.

In Dante's Inferno, is there a circle of hell for bad architecture?

new is fine. without new we would be living in buildings without electricity. without elevators, some without heat. toilets in the hall. water in the basement. airless apartments.
but change to ugly and uglier is not ok.
the reason we look to the past is that there was consideration and time given to quality and beauty.
today the emphasis is on differences which turns into sameness. and money rules. seems money is more important than anything else these days. cut the costs and quality, make the shell appear to be unique. until all we have is the same and ugly.
maybe we should all go to the meeting and try and stop this monstrosity. maybe somebody should challenge their right to do this on city-owned land that they pay nothing for. their non-profit status is contrary to all their money generating activities and holdings.
and their architecture school is certainly educating the future destroyers of the universe.

"roar. ROAR! I dislike modern style buildings and that means they're all objectively bad! ROAR!"

As for Blue Glass's comment regarding how money seems to dominate the discussions - yes. That's exactly how it works. Primarily because uneducated grunts decry every single new thing and champion nothing other than a watered down, uninformed nostalgia for old buildings, which they declare to be of "quality and beauty". And because the culturally illiterate masses spend all their time maligning architects when they really should be attacking the equally culturally illiterate world of developers, buildings get built according to the whims of frivolous, money hungry developers.

For those who really don't understand, here's a rundown: Step 1, an architect is hired by a developer (who already knows exactly what he wants) and presents an idea. Step 2, the developer points out everything wrong with it (aka the parts that don't conform to his original preset "vision"). Step 3, the architect takes the design back to the desk and tries to accommodate the developer's "ideas" and then presents it again. Typically, Step 2 and Step 3 are repeated until the final design is what the developer had in his mind all along (but couldn't build without an architect because he hasn't been trained how to design a 3000 ton structure that won't collapse and kill people). Step 4, the architect goes home with a few extra bucks for alcohol to help ease the pain of living life as a slave to somebody else's maniacal, well-financed whims. That's how it works 10% of the time. The other 90% of the time, there's no architect involved at all in the design (this is a real statistic regarding development in the US).

In the other 90% of cases, the developer "designs" a building, then hires an architect or engineer to make sure it won't collapse. They're then paid to put their stamp on it saying "I swear on my professional license and personal freedom (i.e. not being in prison) that this building will not collapse and kill everybody".

In this particular case, the "developer" is a board of trustees of a non-profit institution. Unfortunately, they have no real ties to the intellectual debate or creative rigor of the institution itself - they're just a bunch of rich bastards who have been hired to run a free school. It looks real good next to their name...

So let's keep demonizing the good guys! How else would we help the bad guys get ahead?