We had a pleasant email exchange with East Village resident and EV Grieve reader James C. Taylor the other day. He sent us the following photo, noting that he was veering slightly off of our usual beat. 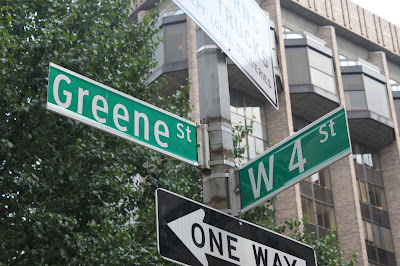 As much as we think we pay attention to things, such as street signs, I didn't see what the big deal was. He wrote:

"I spotted another example of New York City's impending Americanization: my first sighting of the generic conformist street signs. They may not look like much, but I was still shocked by their ability to make a quiet corner of Greenwich Village look like... well, every other town in the US."

Huh, don't these look like the street signs from, say, this corner? 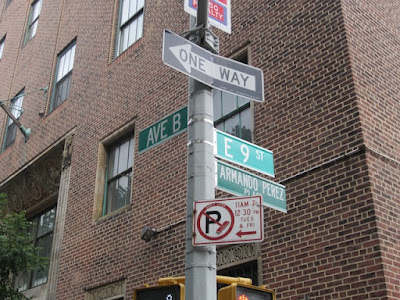 The signs themselves are basically the same, he said. The difference lies in the type. (He's a graphic designer, so he's into the whole font thing.)

"Notice how 'Greene' and 'St' are lower case? The signs on 9th and B (and all the others, going back to the yellow and black signs) all used a condensed uppercase typeface. The change is part of a federal mandate for all street signs to use a lowercase font called Clearview. I remember reading about it a few months back but hadn't seen one of the new signs until [the other day]."

Anyway, somehow we missed this entertaining story from the Daily News last Oct. 1, in which Bloomberg was a dick when asked about the federal mandate to change the font and capitalization on 250,000 city street signs by 2018.

Said James: "I used to refer to events like these as the encroachment of 'America' upon New York City, but these days it seems like New York is just submitting willingly to whatever 'America' wants. C'mon New York, where's your fight?"

According to that Daily News article, there was one man ready to stand up for New York: Rep. Anthony Weiner. Per the article: "Weiner ... wasn't shy about saying where he stood on the matter. He's considering sending a letter to the feds 'but I'm trying to figure out whether to put STUPID in all caps so they'll understand it.'"
Posted by Grieve at 6:55 AM

Deck chairs on the Titanic. I get it, the new signs lend a different feel, but this "Americanization" of NYC runs way deeper than this. Sometimes street signs are just street signs.

excuse me!
a federal mandate about street signs?
don't they have better things to think about - say - like - what kind of light bulbs we must use.

This city is in such a sad state. I was having dinner last night on 13th and 3rd Ave and it looked like Boston, or some other lame as fuck city.

Chubby girls in outfits that didn't fit. Pencil bodied boys in cheap suits walking around like cats that just escaped the apartment and realized it was safe to walk in the city. ALL of them drunk, loud, obnoxious and - most important - PAINFULLY uninteresting and DULL.

These street signs are the glitter in our new plaster ceiling.

Wait, so signs are going from upper to lower case? As a visually-impaired person, I have to say I prefer all-caps as I can barely see signs from a short distance away. All-caps is definitely easier for me to read.

This is beyond stupid. Soon, there will be no physical signs at all - you'll just have to point your iPod at the intersection so it will tell you where you are...or where they think you should be.

Here's a link to an old NY Times magazine article about the new font, Clearview.

As one of them Font People, I'm generally in favor of mixed upper and lower case signage but....really...did we have to use Clearview? Why can't NYC street signs look like, well, NYC street signs instead of looking like street signs everywhere else in the US of A? Doh.

People's priorities are all mixed up.

According to the NYTimes article, there is no federal mandate, just a recommendation. They've done some interesting studies, and Clearview tests out as easier to read, especially for elderly people in low-light conditions. But this is for highways, not for cities, with different lighting (street signs are never illuminated by headlights the way that highway signs are), different speeds (hopefully), and a whole other mix of traffic (pedestrians, bikes, dogs - at least the ones that can read). Out own DOT seems to have assumed that Clearview is the One Best Solution to everything, something the feds never claimed.

Since it's a homegrown problem, you'd think there would be a homegrown solution (like just putting in nicer, and more NY-specific street signs), but that will never happen because, in practice, the government answers to no one.

Clearview? Isn't that where all the scientologists are from!!! Aaaaaahhhh!!!!!!!