So what started as some parents getting upset that rats are overtaking the Ninth Street playground in Tompkins Square Park has become a full-on media frenzy. ABC, NBC, Fox and NY1 have all filed reports. (Hello, CBS?)

Of course, all this media hysteria is great fun to watch.

But! Bob Arihood makes some good points in a post at Neither More Nor Less. For starters: "From what we've seen over the last 4 or 5 years that [rat] population hasn't changed all that much."

And as he points out, some of the criticism of the Parks Department is misdirected. A lot of people simply leave bags of food/trash lying around. Like this one from yesterday that contained some pretty tasty lo-mein. 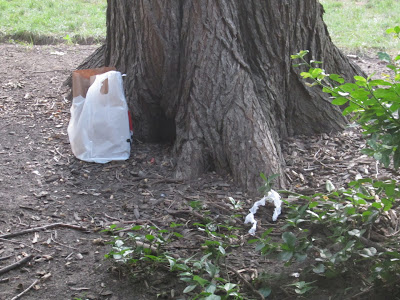 And perhaps people such as The Pigeon Lady shouldn't be pulling up the chuckwagon for the pigeons. Maybe there should be a 10-pound limit? All the leftovers become rat food. 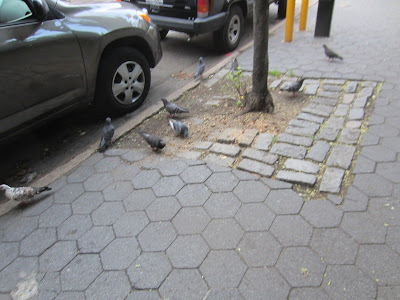 In any event, Bob has some sensible ideas. You can read his post here.

Also, if you are interested in getting involved with the Tompkins Square Park & Playgrounds Parents’ Association ... they have a Facebook page.

Finally, you know what will likely happen... with rat fear at an all-time high, pranksters will begin dressing up as rats to push people over the edge. PANIC. Just like those no good kids who pulled a fake shark prank in "Jaws." 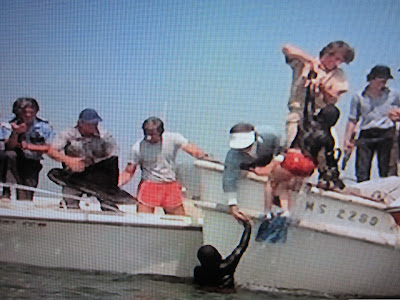 [Top dead rat photo from yesterday by Bobby Williams]
Posted by Grieve at 6:50 AM

Bob's post is right on the money. If they didn't have so much food to eat, they wouldn't thrive in the park the way they have for years. Unfortunately, the crusties and others who get food from the charities leave their leftovers strewn about. That's a real problem.

Makes Tompkins looks like they don't have a problem.

I think we all need to join this Tompkins parents association so that it isn't a small group with all the sway. Or maybe there needs to be another Tompkins association for those of us who don't have kids but want to protect our park.

Last mint, I entered park at St marks, I saw literally dozens of rats within 50 ft stroll, a fewe of which, sat in the middle of the walkway and refused to move! The audacity of these little bastards, I had to literally walk around them. And that's while I had a dog on leash. They're growing in mass and brevity.

there are more rats then people in nyc

is there still a pest NYC control?

watching mainstream media scramble for this story is great.

Seriously, not trying to be a cutesy wiseguy, but I'd rather see those rats than most of the people who hang around TSP.

Our garden started an ambitious composting system 2 years ago and we have no more rats. It's been an astonishing chemical-free success.