Yesterday morning, we spotted a city sanitation agent pulling up to the trash can on the corner of Avenue C and 11th Street. He put on a pair of latex gloves and carefully began to sift through its contents. 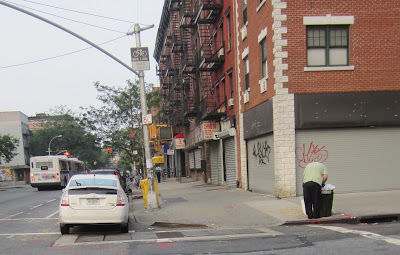 He paid particular attention to a bag (Lord & Taylor?) that someone had placed next to the can. He spent several minutes pulling out pieces of mail and inspecting them. 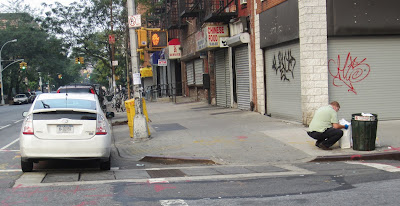 Eventually, he found some letters/bills with someone's name on them. He walked away with that mail. 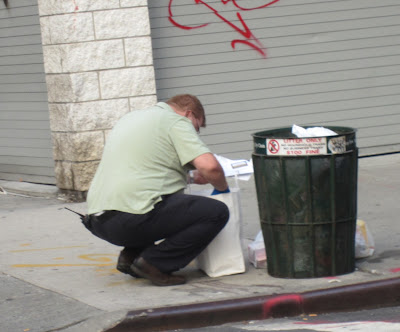 Anyway, the city can and will fine you $100 for throwing trash from your apartment into city-owned trash cans on the street — like this one! Just ask the 83-year-old Upper East Side who was treated like crap for doing so. Plus, there is a warning right on the side of the can. 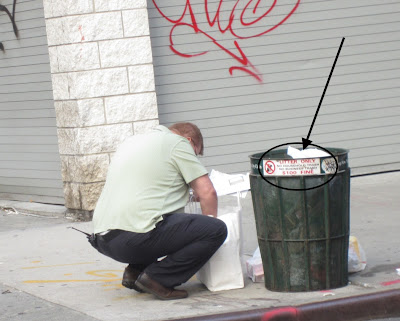 For $100, you could probably buy a top-of-the-line executive shredder.
Posted by Grieve at 7:00 AM

That same piece of shit guy wrote me a 200 dollar ticket for having my French il dog off leash. What a douchebag

Well, good. The trash cans in my vicinity are overflowing with people's household crap, from shower curtains to Pampers to kegger detritus. Disgusting and selfish. Nail 'em.

Trash cans in the EV are always overflowing. Any idiot would throws out his or her home garbage in the city trash cans deserves to be fined. I am, however, concerned that the Sanitation Dept has devoted resources for this. It's one thing if a worker sees someone do it as a result of being on the job, it's another to have a position devoted to sifting through garbage.

You sure that isn't A J Weberman?

sanitation has reduced the number of cans on the street and where there are now cans there is almost always an overflow for which the stores get tickets.
if you take your mail outside, and want to throw the envelopes away, better throw it in your purse or pocket.
while hunting for folks to give tickets to sanitation might look to some of the commercial establishments, sometimes construction folks (and food trucks) that put their garbage inside and besides the existing city cans (the stores get tickets for this too). not some poor slop that threw an envelope into a trash can.

Yeah, let's HANG this guy! Hell, hanging's too good for him...

I dunno, looks like a fairly shit job to me, all the same. Glad I don't have it. Also looks like your standard 10-dollar-haircut kinda city worker with an even bigger asshole of a boss up his ass at one end and a bunch of EV art yuppies snarking at him on the other.

But, that said, let's string the bastard up!

I sometimes check my mail on the way out of my building & throw out any junk mail in the corner trash. Redic to think I could be fined for this!

Let me get this straight. It's not ok for residents to deposit their household trash in there, but ok for drunk bridge and tunnelers to go around the East Village upending those cans in the middle of the night?

OK I can be reasonable--I understand why people should not use these for their household trash, but it seems like an odd priority when there's all these outsider ppl treating our streets and sidewalks like one big toilet/trashcan.

i put "return to sender" over my address on junk mail and put it into a mail box.
i figure i have to recycle it, the sanitation department has to pick it up and put it wherever they are supposed to (do they?) and it should go back to the sender to deal with.

hopefully there will be return postage so the post office will get a little support too.

I am glad to see them doing this. The bin on my corner is always overflowing with people's household trash. I don't know why they just don't throw it away in their buildings.

Around 1986 in LA my then boyfriend got a visit at work from the sanitation police because they found a box with his name on it in a dumpster miles away. His company sold hardware and they got tons of boxes everyday. there was no knowing how that one box got there but he was fined for it.

@Anonymous at 1:30pm - Uh, are you aware that "paper recycling" is the LAW in NYC? And yes, that includes junk mail. If you get fined for throwing your junk mail into a corner trash can, it will be because you are in violation of that very clearly worded law. Doesn't your building or office have a paper recycling bin, or are you just really that lazy?