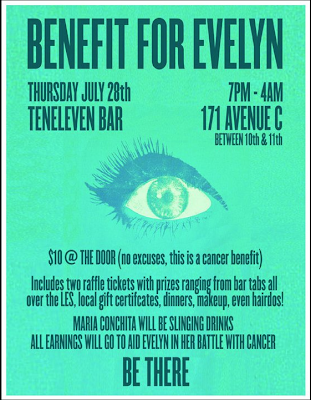 For those of you who are not aware, Evelyn's cancer has returned and we have decided to have the biggest and baddest fundraiser for her so that she won't have to worry about money and bills while recovering.

The date of the fundraiser is Thursday from 7:30 on.

There will be bands - including a solo performance from Uncle Leon of Uncle Leon and the Alibi's at 8 pm and John Embree's Shit show at 9 pm ... a comedy set from Margaret Champagne as well as a panda and a clown.

We have some awesome stuff to raffle off too, including prizes from Tease and Shampoo salon, dinner for two at Porchetta, bar tabs from Doc Holliday's, Royale, Cafecito, Blue Ruin, Milano's, The Library and Nice Guy Eddie's...

PLEASE note that there will be a $10 admission at the door and all tip proceeds will be donated to the cause.


We've always liked Evelyn and TenEleven (this is the former Mickey's Blue Room space), the kind of bar we need more of around here ... featuring the works of local photographers and artists ... and hosting the occasional musician as well as group events...
Posted by Grieve at 6:55 AM