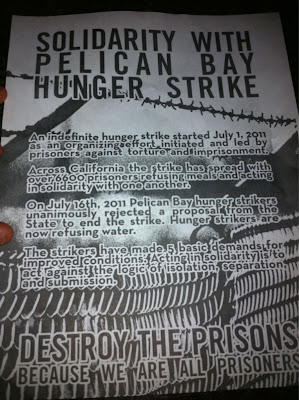 Last night around 10, witnesses spotted a group of a dozen (or so!) protestors marching down Ninth Street near First Avenue handing out flyers in solidarity with the Pelican Bay State Prison hunger strike in California. The three-week-long strike began due to poor conditions at the prison. A little background via Southern California Public Radio:

"The strike originated in the Special Housing Unit of the prison, which houses 1,100 inmates who are completely isolated from one another in soundproof cells and are let out for only one hour each day. The strike has spread to thirteen other state prisons with 6,500 inmates participating over the past few days, thus making it the largest prison strike in California in a decade."

Witnesses told Bob Arihood at Neither More Nor Less that the group — mostly dressed in black — "emptied trash containers and tossed newspaper dispensers into 2nd avenue while chanting anti-police rhetoric." Bob has a photo of the aftermath on Second Avenue here.

Could have been more dramatic. For instance, yesterday in Seattle, organizers hung a banner, tossed flyers and set off a smoke bomb in a busy downtown intersection.
Posted by Grieve at 6:55 AM

this sounds like a YIPPIE/ ZIPPIE act up ... WHY mess the streets up when people have to clean it after?

This sounds more like a temper tantrum than a political protest.

It is a temper tantrum, and real working people DO have to clean these messes up.
As far as the poor prisoners at Pelican Bay, a little background reality check is in order.
Pelican Bay is a so called SuperMax facility.
It houses the most violent offenders in the system, inmates who are too violent to be housed in the standard penitentiary. These are the inmates who repeatedly murder and rape and assault other inmates, above and beyond the crimes they've committed on the outside.
The men housed at Pelican Bay are arch-villians, many of them leaders of the various gangs that exist in the prison system, like the Aryan Brotherhood and the Mexican Mafia.
These are not poor little innocent delinquents who got caught stealing a bag of chips from the grocery store. They are heavyweight felons who create chaos wherever they go, and hence, the unfortunate need to have them locked down 23 out of 24 hours a day.
I'm not saying the system doesn't need to be fixed, but these guys are not an oppressed minority.
There's a reason they're in prison.

I don't understand why trashing a street in New York is going to help prison conditions in California? If they really wanted to do something radical and not make a mess of things, they could've just sat at the chess tables in TSP and refuse to play until their conditions are met.

I saw this happen (actually at around 9pm near bbq on 2nd Ave) and it was completely stupid. They were throwing newspaper boxes into the middle of the street too...and i felt so bad for the cab driver that got hit with one and then had to get out of his car and struggle to get it out of the street. I really don't think their destructive actions that effected real working people is going to do a thing to aid their cause which is occurring 3,000 miles away!

Who were these people? Do they even live in the neighborhood?

Completely agree with the comments re: temper tantrum, messing up streets so other people have to clean it up. Also, thanks to Caleo for his points.

I spent 10 years in California prisons and know the Pelican Bay SHU personally. I wrote a drug war novel Roll Call by Glenn Langohr to show the public the path we are on by incarcerating petty criminals is only breeding bigger ones who are displaced from society when they are released. The U.S is not the leaders of the free world; we are the leaders of the incarcerated world! I started http://www.lockdownpublishing.com when I got out of prison to help other prisoners change their lives through writing. http://youtu.be/jEQ8Gh1-bFs Here is the NY Review Kirkus Discoveries, Nielsen Business Media
discoveries@kirkusreviews.com

I'm also writing over 50 California prisoners to inspire them to turn their lives around through writing. I want interviews and publicity as I am broke out of prison and can't afford the regular channels...
Thank you and God Bless Glenn 949 357 7465