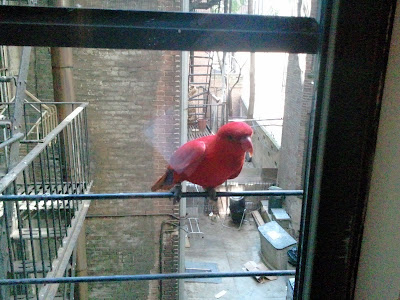 Yesterday, an East Second Street resident found this bird outside his window. (You can read that post here.) Turns out it's a Red Lorikeet.

And as of last night, we learned that it belongs to Lucky Cheng's owner Hayne Suthon, who lives nearby. As she said in an email, he somehow got spooked ... and got of her apartment and into the trees near her apartment. "He would not come down but called to me. I had no idea how I was going to get him down."

That he ended up on the other side of First Avenue comes as a bit of a surprise to her. "We never saw him fly before. He just hopped around and, even when the dog played with him, he would just coast like a plane that could not get airborne."

Suthon is relived that he is OK, and is grateful that his rescuers took such good care of him... and thankful to everyone who helped look for him.

The two will be reunited this morning. And I forgot to ask what his name is. And his name is Redrum.
Posted by Grieve at 6:58 AM

Hope he enjoyed his little adventure.

Nice to hear that this story had a happy ending and I love the bird's name! Heeere's Redrum!

Have his wings clipped so he can't fly away again or use screens or keep the windows closed. Just keep the poor thing SAFE!