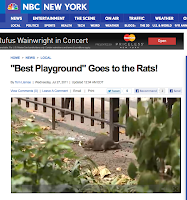 Well, both the Post and NBC New York have just checked in with reports about what Bob Arihood has dubbed "the TSP Ratstravaganza."

As The Villager reported last week, concerned parents have formed the Tompkins Square Park & Playgrounds Parents’ Association after lots of rats have been spotted in the recently renovated, $1.5 million playground off Ninth Street and Avenue A.

Oh, and I should mention that Park officials can't use poison to kill the rats... they need to protect Tommy/Evie/whateverItsNameIs, the red-tailed hawk.

Previously on EV Grieve:
Parents group upset about number of rats in Tompkins Square Park (32 comments)
Posted by Grieve at 6:59 AM

I am so tired of everyone trying to ban rats from the playground. Where else are they supposed to play? In the street? That would be dangerous!

The Post should've used Bob's photos. And given him some credit, too.