Construction netting is up now at 197 Second Avenue, in the space above Shoolbred's. Per the DOB: "STUCCO ON FRONT FACADE AS SHOWN ON PLANS." Uh-huh. 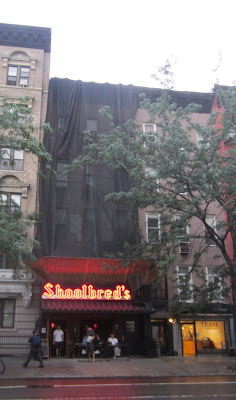 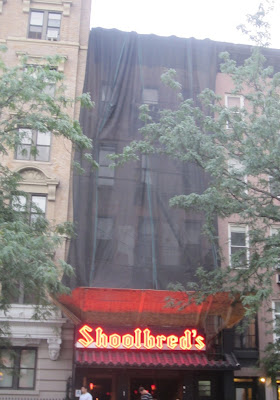 Which prompted a very distressing email from EV Grieve reader AC. "They took down the fucking Chow Mein sign!" It took several years, but the old-school neon Chow Mein sign has apparently finally vanished for good.

Here's a shot before Shoolbred's moved in courtesy of Jeremiah, who has been keeping an eye on this part of the former Jade Mountain sign the last four years. 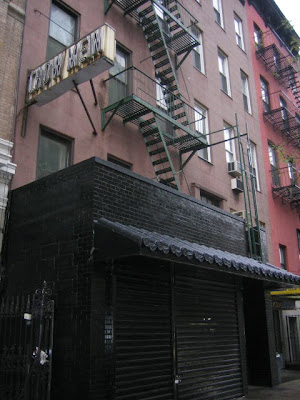 And you can see that the sign is gone. 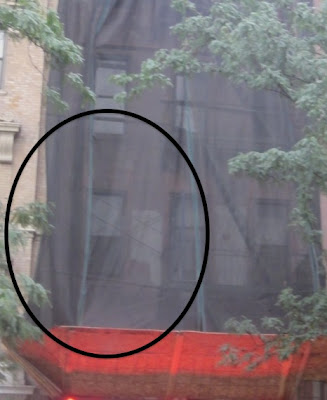 Some history. Jade Mountain's owner, Reggie Chan, died after a truck hit him on his bicycle while making a delivery in September 2006. As Lost City noted, Jade Mountain, which had been here since 1931, closed in January 2007.

Per the Times from an article titled "For Bright Beacons, a Murky Future" — "The restaurant ... spoke to a bygone era, serving steaming plates of egg foo yong and moo goo gai pan until the day it closed."

Many people found the sign as comforting as the food. A welcoming glow on Second Avenue. What the Chow Mein sign looked like in all its glory... 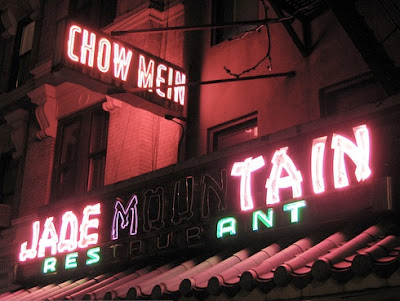 What are the chances that workers will put the Chow Mein sign back up after the renovations are completed?

Right. You don't need to answer.

For further reading:
Jade Mountain (Jeremiah's Vanishing NY)
Curse of the Jade Restaurant (Lost City)
Posted by Grieve at 6:53 AM

i'm screaming right now. and you know the Jade Mountain sign is still sitting up there on the roof, right? it should be donated to a museum or something.

the jade mountain was a beacon when the only restaurants here were ukrainian and polish coffee shops. it provided inexpensive, and sometimes good food - but it provided more then food. it was a neighborhood place where you would almost always run into somebody you knew. they were always open and happy to deliver, and the folks there remembered you after two visits.
and yes, like they have finally done in las vegas (the neon museum) there should be a place to save and display old store signs. they are historic and some of them quite beautiful. signs are an important part of a neighborhood and the new ones here have no soul.

Has anyone asked the owner about buying these signs? Sounds like there would be a lot of takers.

Jade Mountain was a cool restaurant. They made shrimp dipped in egg and wrapped in bacon. A classic!!

the thing is, unfortunately, most (and i happen to know i few of them, and i always end up telling them the story of that chow mein sign whenever we pass by there)that have moved here in the ev do not remember anything other than shoolbred’s being there. morevoer, most of the patrons of shoolbreds aren't from around here, thus are apathetic about that sign, whether it is there or not (some probably don't even know that the sign exists/[-ed]).

"Chow mein had a noirish feel: This steaming bowl of old-style Cantonese fare evoked those exciting old films where streetwise private eyes or slick criminals slipped out of a cold drizzle and into a mysterious velvet booth. After ordering rudely from an obsequious waiter, they would shovel down the food and plot how to hide a stiff or blow a safe."

In Search of Chow Mein

Screaming right along with you, Jeremiah.

WHHHHHHHHHYYYYYYYYYYY?????? Who are these people and why are they the ones making these decisions?

Wait, you mean they took down the sign for a business that is no longer there?

i remember the Schoolbred's people deliberately left the sign in place. they made a point of it. maybe they are safeguarding it? or am i being too optimistic?

If anyone's up for speaking to the owners of the building, it's probably possible that the American Sign Museum could arrange to collect and refurbish the sign(s).

here's a few photos of the storefront http://nychinatown.org/storefronts/secondave/197secondave.html

So sad. I hope they'll donate the sign if they won't reinstall it.

Tonight I was in Ridgewood and saw that Morscher's Pork Store in Ridgewood replaced their beautiful neon sign with a terrible plastic one.