And yesterday! Workers started putting up the scaffolding... 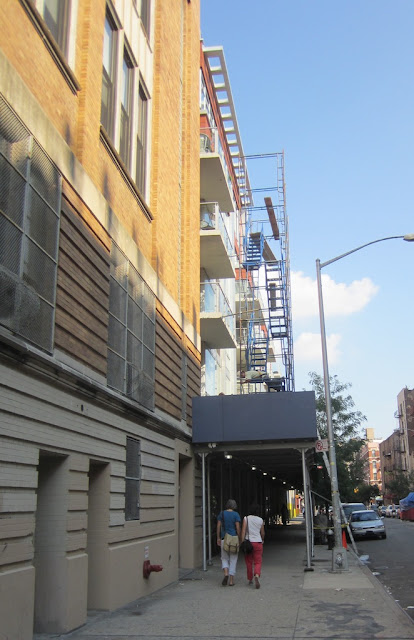 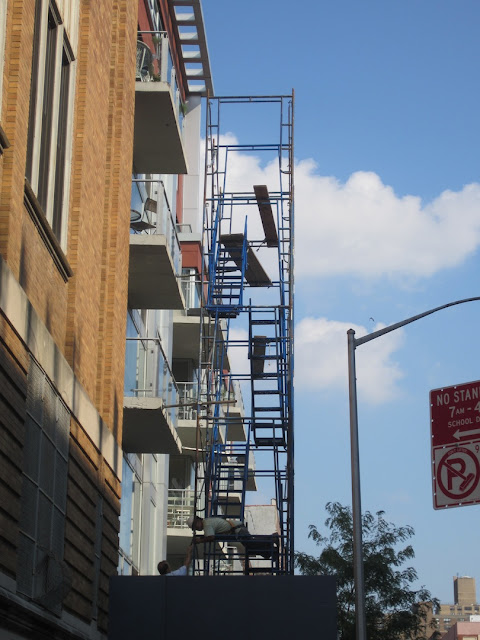 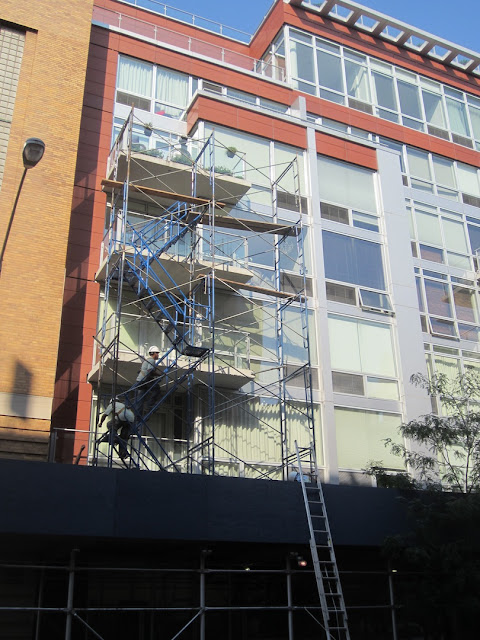 There were a handful of complaints on file with the DOB:

According to a new DOB permit, workers will be doing "balcony repairs."

As The Real Deal reported in April 2010:

Beneath the two-year-old building's reputation for hosting raucous rooftop pool parties lies a reality worse than the most killer hangover — flooding, crumbling balconies, alleged mismanagement of the condo board's funds and two unresponsive developers who have left owners banging their heads against mold-ridden walls, claim several residents who forwarded dozens of documents detailing these issues to The Real Deal.

Why the wait? Perhaps to give the A Buildingers another summer of fun?
Posted by Grieve at 6:50 AM

These issues are not uncommon among the new buildings that were slapped together by dubious developers and even more dubious contractors during the last bubble. The construction quality is crap and now they're starting to fail. They just tried to build them the cheapest and fastest way possible. Awful all the way around.

Who was the developer on this? Name names please!

According to the Real Deal article, the developers are Ben "sledgehammer" Shaoul, president of Magnum Real Estate, and Rob Kaliner, president of Ascend Group

Like Grieve said. But I'd add that I believe that Robert Kaliner was the Managing Member of the development company they set up to develop the place.

It's the infamous "A" building. Google that and Shaoul and you'll get an eyeful.

We were in it while it was getting built. We went there to get some wood cut, but East Side Lumber was gone and this place was already half up in its place. My wife got the construction guys to cut our wood for us and we hung around a while talking. One worker said a guy from Asia bought the top floor for his daughter who was attending NYU.

Oh, I thought this was the new Phoenix!

Lux, the building that Phoenix is in is actually a Magnum/Ben Shaoul building too.

Ha! I liked the building that previously stood where the A Building is. David LaChapelle had his studio there.

BEN SHAOUL is the person behind 166 elizabeth st.

one of the last great articles written by the Julie A. Lobbia before she died.

Rob Kaliner should be very ashamed of himself.