Something new in the works for PS 64?; plus sidewalk bridge expiration anniversary 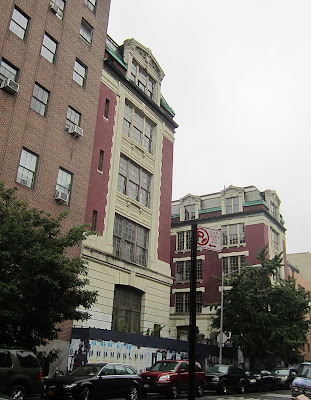 EVG reader @fashionbyhe sent along the photo below, asking what was going on with the former PS 64 and noting that the permits for the sidewalk bridge expired... 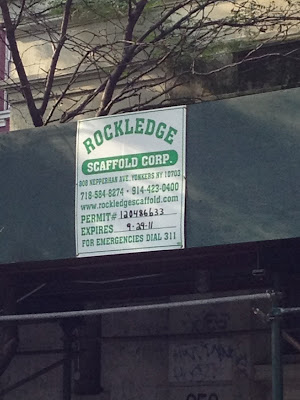 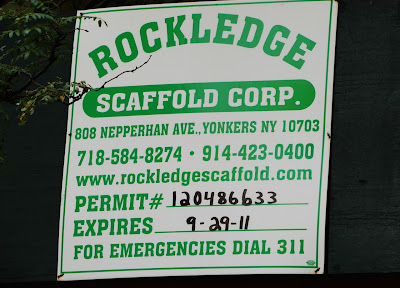 Aside from noting the one-year anniversary of the sidewalk bridge's expiration date, there is some other activity to report here at the former PS 64 and CHARAS/El Bohio community center on East Ninth Street and 10th Street just east of Avenue B.

Tomorrow night, there's a CB3 Landmarks Subcommittee meeting. And on the agenda:


The windows could use a good replacing, as you can see here on the East 10th Street side. 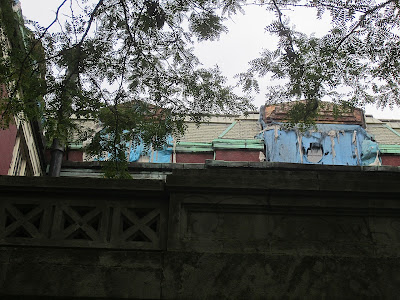 On Aug. 8, the DOB disapproved a plan to repair and restore the façade, a job with an estimated cost of $510,000, per city documents.

Of course, the building's controversial owner, Gregg Singer, reportedly had workers hack away at the ornate dormer windows and terra cotta trim back in 2006. Could have saved himself some future trouble by keeping everything intact.

In addition, city records show that there is a new architect of record on the permits — Mark Ginsberg of Curtis + Ginsberg Architects LLC. (Among many other projects, the firm designed the plans for turning the former PS 90 in Harlem into 75 apartments and a community space. However, PS 64 was landmarked in 2006; the property deed limits the property to community use.)

Singer is still listed at the DOB as the owner of 605 E. Ninth St. He bought the formerly city-owned building in 1998 for $3.15 million. Aside from a whole lot of neighborhood drama, not much has been happening with the space for 10-plus years. (There's not enough time in the day to get into all the history here since 1998. The Villager has extensively covered this story through the years. Check out their archives here.)

In March, a deed for "community facility use only" arrived at Massey Knakal, who noted, "Ideally, the highest and best use for the property would be to renovate the existing structure and convert it into a modern school or college dormitory." (No price was listed.)

The listing is no longer on the Massey Knakal site. So, a question that people have have been asking for years remains: Will something finally happen to the space now?

Meanwhile, we do know what has been going on with the former school, at least on the East 10th Street side: Some folks have created temporary housing under the sidewalk bridge... 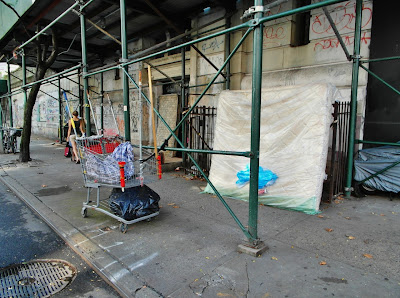 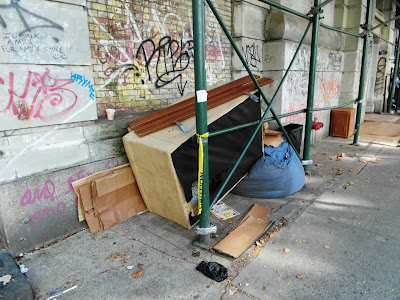 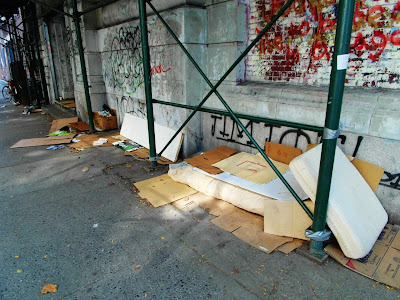 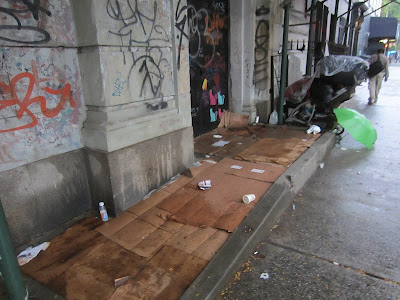 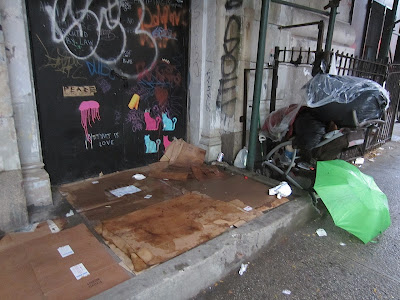 Rebranded P.S. 64 up for grabs: Please welcome University House at Tompkins Square Park to the neighborhood
Posted by Grieve at 6:55 AM

The people living on the 10th Street side are violent, and I've seen them fighting with others a few times. They've completely taken over the whole sidewalk under the scaffolding.
I hope something good happens to this building.... soon!

The 9th street starbucks sidewalk cafe permit expired and the city bastards closed the store (since re-opened). Not yet renewed, nobody is allowed to enjoy sitting outside on the sidewalk.

BUT an eyesore of scaffolding permit expires and NOTHING happens.

I'll let you connect the dots on your own.

We have a dire school overcrowding situation in the city and particularly in the district. We should be building and acquiring property for city schools, but of course, Bloomberg and his pro-privatization pals aren't gonna do that.

The city *should* be using all legal and regulatory means to make it unpleasant for Singer to sit on that property and let it rot in hopes that it'll collapse and he can build his goddamn rich kid dorm tower or whatever. The city should then buy back the building at a non-totally-crazy price and fix it up for use as a school and community center. Maybe name it Fuck You Rudy Giuliani Elementary School in honor of the municipal vandal that sold Singer the building for a song.

My family lives on this street and the state of the building creates a negative, violent and depressing feel on the block. I have lived in the neighborhood for 15 years and until I lived on this street I loved the east village. I believe the dilapidated building is part of the problem of the state of mind of the people that live on 10th street-many of them living in public housing etc. I beg that something positive is done with this once beautiful and spacious building that can improve not only the state of mind of the people on 10th street, but of the whole area. There are so many needs that can be filled with this space, such a shame that is has been put to waste and has disappeared for the last 20 or so years.

According to SHADOW sources, Singer is planning to "wait out" his opposition (community activists, politicians, etc) so that he can do what he wishes with the building.

With lots of positive cash flow coming in from his other real estate holdings, he is financially able to do this.

Perhaps a creative use of eminent domain by the city to retrieve this school building in order to provide much-needed community space, or, better yet, another neighborhood school, of which there are way too few....