As we first reported yesterday morning, neighborhood group The L.E.S. Dwellers are demanding an impartial investigation into their recent suspension by Community Board 3.

Upon their suspension, the group submitted a formal complaint to Manhattan Borough President Scott Stringer, whose office oversees the city's Community Board governance. 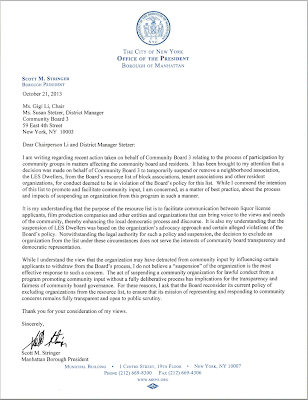 As he wrote, "the decision to exclude an organization ... under these circumstances does not serve the interest of community board transparency and democratic representation."

"While I understand the view that the organization may have detracted from community input by influencing certain applicants to withdraw from the Board's process, I do not believe a 'suspension' of the organization is the most effective response to such a concern. The act of suspending a community organization for lawful conduct from a program promoting community input without a fully deliberative process has implications for the transparency and fairness of community board governance. For these reasons, I ask that the Board reconsider its current policy of excluding organizations . . . to ensure that its mission of representing and responding to community concerns remains fully transparent and open to public scrutiny."

The L.E.S. Dwellers have been active in opposing new liquor licenses on the Lower East Side, including the proposed SoHo House on Ludlow Street ... and the ongoing battle with the DL on Delancey. CB3 first recognized the L.E.S. Dwellers as a block association in October 2012.

The CB3 suspension is to last the remainder of 2013.

Previously on EV Grieve:
Breaking Badly: LES Dwellers demand impartial investigation of Community Board 3 (33 comments)
Posted by Grieve at 6:00 AM

'Suggest they reconsider' ? Isn't he in charge of the community boards ? He should tell them that they are required to listen to them.

He forgot to say "pretty please."

LES Dwellers scored a lengthy article in today's Times! Good on ya!

Seems that eventually it'll just be condos (that no one really lives in), hotels, bars, "experiences" (hint: The Pickle Experience, The Challah Experience) and a totally transient population.

At that point, no one will actually live here, around to be the unseen hand that juices the kale.

Stringer has fired a warning shot, a strong suggestion that everyone place nice and the CB3 is not following the law. If they are smart they will re-consider. Tempers need to cool and level heads must hast this out.

Some people apparently expect Scott Stringer to come in all Dirty Harry, guns blazing, but that's not really how to get stuff done. Stringer's is more like a nice quiet Vito Corleone request.

The problem now for CB3 is how to withdraw the suspension without totally humiliating Li and Stetzer.

Congrats, Grieve! You're in the thick of it now and increasing your journalistic cred (not that you didn't have any before!). Must feel good. :)

The problem with CB3 is that only the 1% rules, i.e. Li, Stetzer, and Palitz. The rest are just lackeys, taciturn and/or are scared to go against that 1% and just vote whichever the 1% goes. For a non-paying position as a community member, ever wonder why hardly anyone resigns if the position causes too much drama, headache, and scorn? That's because there's a lot of back room deal and handshakes that go on where most members profit and serve their self-interests. Now that CB3 has been called out, the backlash of this is that instead of the liberal approval of liquor licenses, CB3 will now have a backroom deals with the landlords to get the chains -- 7-11, Duane Reade, banks, Starbucks ... -- to lease out their space instead of that "full-service restaurant, serving food until one hour of closing on the 1st floor; and the 2nd and 3rd floors operate banquet rooms for private functions and a sitting area with service bars only [yeah, right]” out of spite, and then leave the community and relocate somewhere else.

@Communist Board 3, backroom deals? someone, queue the xfiles theme song! you don't want bars. you don't want chains. perhaps you want the drug dealers to return. great idea! or not. most of you anti-business, not-in-my-backyard folks are high enough already.

X-Files song? Why do you think LSD3 has to resort to videotaping and recording meetings.

Not anti bars, or anti chains, but must everything that opens up just be chains and bars? Area is already saturated with bars and chains. all about balance. How about small businesses or mom and pop stores. But of course a communist board member would argue that the chains and the bars deters the drug dealers. It's not an either or. Only a suburbanite transplants transients would love to have chains and only bars Like there aren't any drug dealings on these so called "food establishments" applying for liquor licenses. Cue your Brain Candy Happiness Pie. You're just being rigid and having a hard time swallowing this, THAT'S WHAT SHE SAID!

"without totally humiliating Li and Stetzer." --Probably too late for that now.

For CB3 to keep up the new reality some changes will have to be made... most likely at the top. They've just let it go on too long.

Scott Stringer is serious about community board reform. Remember that line of BS ?

A lot of you people are anti-everything. You speak of mom and pop shops and small businesses, good luck finding any of them that can afford the rent. This is wh ywe are seeing a proliferation of chains. You can criticize the suburbanites and transplants all you want, but I grew up here on the lower east side, and I still live here now 46 years later. Yes the neighborhood has changed, but look around you. That's what keeps the community going, keeps it vibrant. Yes it is annoying, loud and congested but I will take that over the drug infested dangerous streets that I grew up on. Streets where my 70 year old mother was robbed several times for the money she made cleaning apartments. The LES Dwellers are troublemakers, they want to stop change, in my book that makes them the communists.

@11:59AM - exactly - why does everyone think it's either this OR that? It has always been about mom 'n pop stores and UNIQUE kinds of SHOPS in contrast to just bars and chains (hmm - there's a moniker brewing in there "Bars & Chains"). The neightborhood was comprised of individual unigue places and THAT is what made it attractive to people in the past. We are saturated with B & C - crap food and drunken nonsense does not a neighborhood make. That's the suburbs, people. Let the pendulum swing back to where it should be - or better yet - SWING it back there ourselves!

Lets be clear. No one has screwed this neighborhood more than Stringer. Ariel Palitz continues to crap all over this neighborhood and our good residents. How many letters and video tapes does he need? Gigi needs to do something about the situation. And this is outrageous with Stetzer and Gigi. Stetzer wants to squash the Dwellers. Stetzer has the gall to help this guy Paul Seres. What a douche. And now he's over on Avenue C as well with Apt 13. Another applicant that received a full liquor license, against CB3 policy, which is Beer and wine only in saturated areas. It's a rule. Alex refuses to enforce the policey.

That's NOT What She said...

Interesting to read that the choice is "bars or drug dealers". There are other types of businesses that might be welcomed into the community you know.

And just to be clear, alcohol is indeed considered a "drug", albeit a legally regulated one. And the concerns being voiced here are, specifically, about properly regulating the sale and venue of sale of that drug.

And if you want to claim that alcohol is not a drug, think about the result of DWI such as the tragedy that occured at the corner of East 4th St and 2nd Avenue not too long ago. Or about any of the other alcohol-related driving disasters, e.g.:

"Every day, almost 30 people in the United States die in motor vehicle crashes that involve an alcohol-impaired driver. This amounts to one death every 48 minutes.1 The annual cost of alcohol-related crashes totals more than $51 billion"

I'm so tired of the lame, false dicatomy - chain store change or back to the old drug days. There are way more than those 2 options.

Interesting CB3 meeting last night. Only wish that more folks had turned out. The Board members seem to take that as a sign that they can do what they want.