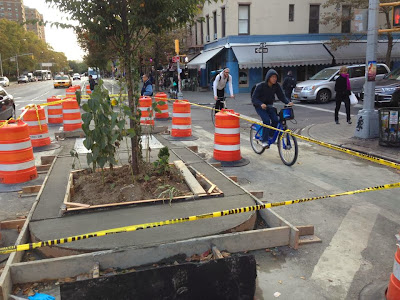 As you may have noticed, workers have been replacing the bike lane buffers/pedestrian refugees along First Avenue ...

One reader heard from workers that the original contractors used cheap cement three years ago. So they hired new contractors to re-do the buffers that started cracking.

Meanwhile, much to the chagrin of several residents, the reconstruction has killed off the small garden that they created and tended to at East Seventh Street these past three years... 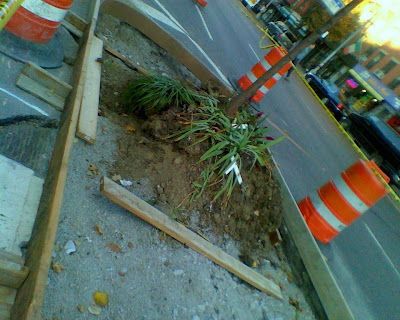 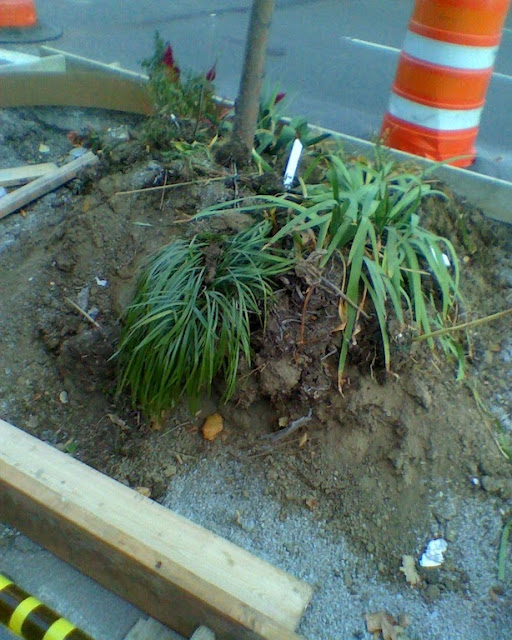 ... and the buffer garden at East Seventh Street in better days ... 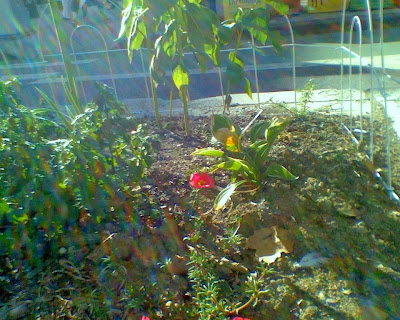 Garden photos via EVG reader Raquel.
Posted by Grieve at 5:21 AM

If I were mayor for a day, the bike lanes would be gone.

Wow, so much butthurt over street solutions that minimize the risk of injury to non-motorists... Some of you think you're so cool and old school, but all you are is just unreasonable, bitter people.

As a pedestrian, I'm very pleased to have a shorter crossing across a major road where cars frequently speed, including to beat the light. I think I'll appreciate it even more when I get old and start to struggle with walking.

With that said, I do hope the little gardens grow back / are brought back.

As a pedestrian, I know darn well that bike lanes make walking across streets much less safe, because bikers are closer to me. If bikers obeyed traffic laws, it wouldn't be a problem, but the fact is that most of them don't. Like 99%. If we have to have bike lanes, at least make them outside the parking lanes, not inside them.

Surely we can count on getting the hi-grade stuff from these new contractors.

Your gripes are irrational. The bike lane is what, maybe 5 feet wide? Wait at the curb, look both ways and I guarantee that you will never be at risk of getting hit by a bicycle. Not only do people which almost get hit by bicycles those who do not look, but they also fail to realize fortunately for them bicycles can menever and brake on a dime so it may only appear collision was imminent.

More importantly, the reduced crossing distances and reduction in moving lane width significantly enhance safety. The beautification is a nice bonus too.

The traffic calming improvements in NYC are undeniably popular. Most New Yorkers (which are pedestrians only ) support the safety improvements. Even smart drivers realize the benefits of improved traffic flow, less drivers, and at some point they will have to exit their cars.

The bike lanes should be outside the parking lines. It's odd to have a high-speed danger lane (yes, the cyclists are dangerous), then a parking lane with a little island for pedestrians, then more high-speed danger lanes. At least put all the high-speed lanes together. It's more aesthetic and less confusing. It also allows automobile drivers and passengers at least one side of access directly to the sidewalk, instead of stepping out either into car or cycle traffic.

Anon 11:44 Who do you work for? Bikes may be able to stop on a dime, but only if they feel like it. On my corner (6th & 1st Ave) they fly through the light after speeding thru the 5th St cross which they feel they do not have to yield at since there is no cross traffic because of Village View. I have HEARD bicyclists tell each other they do not have to stop at 5th St because there is no cross traffic! Until bike riders adhere to the rules of the road, pedestrians are not safe

This blogs' comments section seem to clogged with a few folks who somehow are convinced the 1960s ("car through-put") was the golden era of urban transport planning. We've learned some things since then, and we can put them into effect to make our streets safer, more pleasant for us who live here.

Bikes lanes and pedestrian plazas are SO 2013. Truly progressive cities have iPhone/Pod/Pad charging stations, self-serve fro-yo in a hoof kiosks and a new lanes for passed out drunks, all conveniently located in the gutter. Citi branded of course.

"We've learned some things since then, and we can put them into effect to make our streets safer"

A Shiny New Mercedes Feels So Good As It Rolls Over You said...

Now that's what I call safety!

If you want to ride a bike everywhere move to Haiti.

That's a garden? There's a crack in the sidewalk in front of my building where a bit of grass grows, but it's not a garden.

Oh how fanatical the bike enthusiasts can be in their comments. So superior-sounding.

I wouldn't care if their safety claims were more accurate.

Cyclists in this city pedal amok unfortunately; tearing through crosswalks/intersections against the light, riding on sidewalks, etc.

I've been injured by selfish cyclists twice recently (one of them while he was standing on his pedals waiting for the light to change; which was noble but he rolled back into me as I crossed with the light!).

The 48% figure is a complete lie, no doubt made up by some jerk who works for the city transportation Stalinist planning commission.
The fact is that many bicyclists ride in an unsafe manner. Just stand at 1st Ave. and watch them fly through red lights.

If you want to drive a car everywhere, move to L.A.

So Sorry, There Are Only 1.4 Million Cars Owned By NYC Households said...

@Anon 12:25 PM -- you're right (about the number, not the "Stalinist" part, which is very insensitive to those who experienced Stalin's reign of terror as opposed to the flower pots you hate so much, but what good would a post about bicycles be without hyperbole, right?).

I heartily recommend to you that you stand at 1st Avenue (or 2nd Avenue, or 3rd Avenue, or ...) and watch the cars and trucks fly through red lights. Just don't get hit because it will make you very sad if you do.

In the meantime though, consider this short excerpt from an older (2006) article in the journal Injury Prevention by a couple of folks from the NYC DOH:

"Results: Almost half (48%) of all MVC deaths in NYC were among pedestrians, compared with 12% nationally. Pedestrian death rates were highest among older age groups (⩾65 years). NYC’s older pedestrians were more likely than US older pedestrians to be killed at an intersection, during daytime and on weekdays."