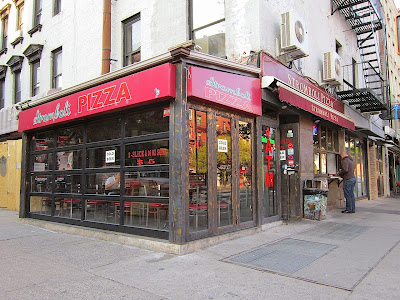 EVG reader Aizaz shares this sad news from Stromboli Pizza on First Avenue and St. Mark's Place. Cesar, a familiar face behind the counter, was recently involved in a fatal bicycling accident. (Here is a news report of the accident.)

"Apparently he was on a bicycle going home to Brooklyn after work and was hit by a truck and died from his injuries in the hospital after being in a coma for a few days," Aizaz says.

He leaves behind a wife and three children.

Stromboli has a donation can out on its counter to help his family pay for various expenses resulting from the tragedy. 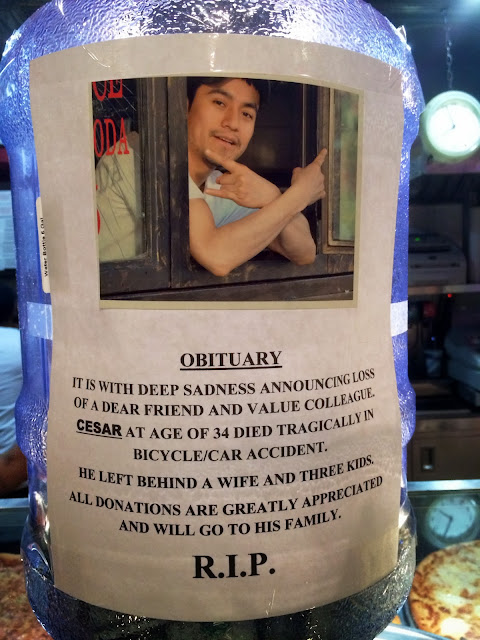 Says Aizaz, "Cesar had a lot of charm and a very positive attitude about everything we ever chatted about."

A resident who has lived near Stromboli since 1985 has set up a crowdfunding campaign:

Cesar was always a smiling, sunny face behind the counter at Stromboli's Pizza, where he worked for 17 years. While biking home to Brooklyn after a shift on Oct. 21, he was struck by a delivery truck and sustained multiple injuries. He lapsed into a coma at Bellevue hospital and succumbed to his injuries on Oct. 30. This fund is to help with hospital expenses and funeral costs. Cesar was 34 years old and leaves behind a wife and three small children. Stromboli's owner, Joezef, will accompany the body back to Mexico for burial.

Find the GiveForward link here.
Posted by Grieve at 5:30 AM

I am saddened by this news. He was always a smiling, sunny face behind the counter, and he worked so hard. I had no idea he was struck by a vehicle and in Bellevue for the past few days...the guys at Stromboli never said anything...

NOOOOOO!!!! I am so SAD about this! EVERY DAY he said hello to me and asked how my dog was. Tragic. What a good soul and lovely person taken too soon. Condolences to his family.

omg. that is incredibly sad. i just can't process these things. he served me my favorite sweet-tasting pizza and gave me free garlic knots. i feel just terrible for his family. 3 kids! jesus fucking christ.

This is terrible news. I've lived next door to Stromboli's for 20 yrs, and met Cesar when he first started working. Back then he was a cute kid with these amazing silver stars set in his front teeth. I would purposely stick my head in the window just to get him to smile at me, which he did often. He was a real good guy and an incredibly hard worker. Terrible news, he will be missed.

Not that I'm aware. Just the donation jar on the counter for now.

This is the kind of thing that makes me so angry when people complain about separated bike lanes and other street safety features. We should be able to use our city--OUR city--without fear of getting killed, often by virtue of poor street or traffic design.

Cesar was the nicest guy, I was there about 2 weeks ago having a slice and locked my bike to their pole outside. He had just returned and had nowhere nearby to park it, so he leaned his bike over mine at the pole outside the pizzeria, since there was nowhere else to park. We laughed about the lack of bike racks when I went back to unlock my bike, he was very polite and always had a nice smile, he will be missed...

I have just started a GiveForward fundraiser to help Stromboli's owner, Joezef, with funeral expenses. The link is here: http://gfwd.at/1aoQePm

Joezef is accompanying the body to Mexico for burial tomorrow. The family appreciates any help that can be given at this time.

Caesar was the sweetest guy, my favorite face in Stromboli. Because he had his own family he always took special time with my daughter, "Hello Princess," he would say, "How are you today."

This is terribly tragic, he will be missed by us. My heart goes out to his family.

I was shocked, and deeply saddened, to find out the news about Cesar. Over the years, we often hung out and talked while I waited for my pies to come out of the oven. We are both fathers and have young children who share the same birthday. One year he bought a bunch of pastries from Veniero's for my son's birthday celebration and surprised me with them when I came in to pick up my pie. That's the kind of guy he was. I'm really going to miss him. My heart goes out to his family, and especially his three little girls. Their loss must be staggering. I wish them peace and strength in the days ahead. We will miss you bro...r.i.p.