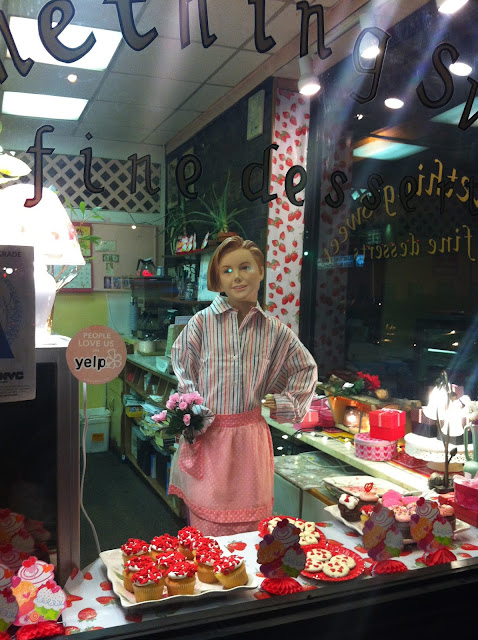 Schnitz, which serves old-fashioned schnitzel sandwiches with unconventional toppings at Smorgasburg in Williamsburg and Dumbo, is applying for a beer-wine license for the former Something Sweet space on First Avenue at East 11th Street.

According to paperwork (PDF!) filed ahead of this month's CB3/SLA committee meeting, the quick-serve restaurant will hold 12 tables... with proposed hours of 11 a.m. to 10 p.m. Monday-Wednesday; until 12:30 a.m. Thursday-Saturday; and noon-10 p.m. on Sunday.

Schnitz will serve sandwiches, soups and salads from its East Village location.

You can find their menu here.

I've never heard of Schnitz (or been to Smorgasburg, for that matter)... but I know that people like their food.

Here's an item on their food via Alan Richman at GQ:

I daringly tried a schnitzel, one of the least likable foods on earth. Allow me to sum up the attraction: hot, dry, fried meat on a hot, dry, summer afternoon. It's worth noting that during the preparation of schnitzel, the meat is often hit repeatedly with a hammer.

The purveyor was Schnitz, and the sandwich I selected, called Mrs. Child, turned out to be the dish of the day, a breaded chicken cutlet that was juicy within and crunchy on the outside. Such perfect texture is virtually impossible to achieve with veal, the preferred meat of German and Austrian schnitzel eaters. Fortunately, there were none around to complain. The schnitzel came on a Tom Cat pretzel roll with celery-root remoulade, which makes anything taste better.

Something Sweet, the family-owned bakery, had been closed since July 2012. There had apparently been a variety of issues, from problems with the landlord to health-related concerns for a family member.

Email ThisBlogThis!Share to TwitterShare to FacebookShare to Pinterest
Labels: Schnitz, Something Sweet

Don't like schnitzel then don't eat it you tit.